Who doesn’t like scary movies?  Jumping in their seats?  Covering their eyes?

Growing up in the 1980s, I remember staying up late with my girlfriends and watching Friday the 13th, Nightmare on Elm Street, and Halloween.  Here we are twenty years later, and we still have late-night watch-a-thons at least once a year and we watch those very same movies.  A few of the sequels lost the original’s “Boo” factor, but that didn’t stop us from catching as many as possible.  Maybe we simply like nostalgia, or maybe we simply love a great scary movie!

The scary movie genre fell a bit silent in the early 1990s, but in December of 1996, a new era began with the screenplay magnificence of Kevin Williamson, and the directing brilliance of Wes Craven with Scream.

The intensity of Scream opened immediately with Drew Barrymore’s scene, and continued throughout the entire movie – the piercing ring of the telephone, the horrifying sound of the digitized voice, the mystery behind the long, black cloak, and that creepy mask. 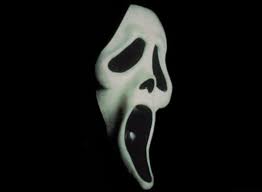 The mask — That Ghostface mask still frightens me to this very day.  I absolutely love Halloween, and opening the door to see all the creative children; but not Ghostface!  I have to force a smile while I hesitantly place yummy candy in Ghostface’s pillow case.  Anyone else notice that?  Ghostface always has a pillow case at Halloween, not a jack-o-lantern — why a pillow case?  What’s in the pillow case?  Would I be so afraid of that pillow case if Ghostface wasn’t so spooky?

What’s another of the most impressive aspects of Scream?  The whodunit mystery — Billy did it!  No, Principal Himbry did it!  No, is Gale doing it?  No, maybe it’s Cotton? It’s Randy!  No, who is the killer?  It’s Billy!  Oh, and Stu?  And, cue the Ah-Ha moment — Brilliant!

2) Never drink or do drugs

Having watched scary movie after scary movie, I absolutely loved the obvious, satirical, slap-in-the-face cliché moments in Scream.  Combining the terror of the anticipation of Ghostface with the laugh-out-loud comedy, Scream left its mark in movie FaBOOolousness.

Sequels usually don’t carry the same power as the originals; however, Scream 2 sure didn’t fail Scream in terms of the whodunitmystery.  It’s definitely not Billy & Stu….or is it?  Is it Gale?  No, is it Randy?  No, it’s Derek.  Nope!  It is…. and Scream 3, the only installment not written by Kevin Williamson, took a different approach.  While it wasn’t nearly as successful with the whodunitmystery, I still had the killer pegged wrong.

Scream paved the way for scary movies, and luckily, today the scary movie industry is still going strong.  Now, here’s to you, Scream 4:  Sidney’s back, Dewey’s back, and Gale’s back.  I can’t wait!  We’re going Saturday…are you?

What’s your favorite scary movie & why?  I’d love to hear from you!