Vampires are especially hot right now, but technically the story of the television vampire has been popular for decades.

The history and mythology of the vampire has us believing the following to be true for the supernatural creatures: vampires have super strength, lightening fast speed, immortality, eternal youth, and no souls (therefore no conscience).  Vampires have pale skin and are cool to the touch.  They fear holy water, crucifixes, and garlic, and sunlight will burn their flesh.  Vampires sleep in coffins during the daylight hours, and walk the night in search of food, or play toys; whichever you prefer to call it.  A vampire doesn’t have a reflection and can’t enter one’s residence without a proper invitation from the homeowner.  And, most importantly, a vampire experiences the most excruciating hunger that only blood will satisfy.

More often than not, the television vampire is sexy.  Whether the blood-sucker is male or female, the character is both mesmerizing and seducing, and has the power of extreme mind control.  The older TV series show their vampires transforming into bats, giving them the ability to fly away; today, the vampire possesses lightening fast speed and doesn’t have to shape shift anymore.

Over the years, the television vampire has adapted and has discovered a few ways around previous restrictions.  For one, the vampire has emulated today’s watchful eaters, such as vegetarians.  Instead of feeding on human blood, vampires may drink only the blood of animals.  Spells and elixirs have assisted today’s vampire in walking among the living in broad daylight.  And garlic?  It’s been left behind as an old superstition.

Are you hooked yet?

Future TV with Bite posts will discuss vampire television in further details, but the list below provides just a taste of my television favorites: 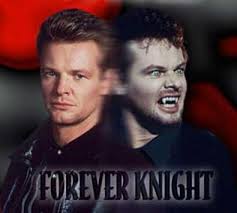 Detective/Vampire Nick Knight (Geraint Wyn Davies) fights crime in an attempt to make up for his cold-blooded killings centuries before.  He manages to keep his secret from everyone, including his partner, except for the medical examiner/confidant, Dr. Natalie Lambert (Catherine Disher), who provides him at times with human blood. 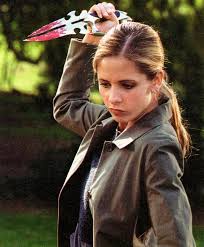 Buffy the Vampire Slayer, 1997-2003 – The WB, and syndicated on multiple channels today 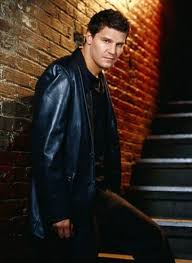 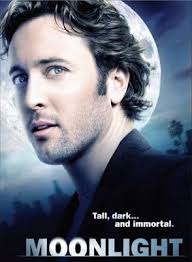 Private Investigator/Vampire Mick St. John (Alex O’Laughlin) and reporter, Beth (Sophia Myles), fall in love while keeping Los Angeles and Mick’s secret safe.  Mick, however, keeps an even larger secret from Beth – his vampire wife, Coraline (Shannyn Sossamon), had kidnapped Beth as a little girl, and he was the one who saved her decades ago.  Moonlight may have only lasted the one year, however it remains one of my absolute favorites. 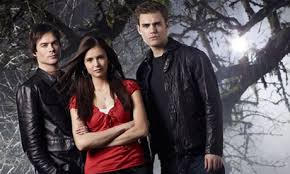 Two of the most popular television shows on today revolve around the vampire world, True Blood on HBO, and The Vampire Diaries on The CW.  These shows are so hot, they require a future Tele-Tuesday post all their own.

While not airing new episodes, these vamp series live-on in the ever-popular syndication world: Kolchak: The Night Stalker, 1974-1975 (Chiller and SyFy); Kindred: The Embraced, 1996 (Chiller); and Blood Ties, 2007, (syndicated outside the United States).  Chiller and SyFy run a different marathon every day making it easy to catch up on these older series; check them out!

36 Replies to “Tele-Tuesday: TV with Bite”