Welcome to this week’s Why It’s Worth a Watch Wednesday where Amber West and I channel surf over to TNT.

As I mentioned on an earlier Tele-Tuesday post, TNT hosts some of the hottest summer programming on television today, and the network once again hit one out of the ball park with the new dramedy Franklin & Bash.

“We’re Totally Lawyers” – doesn’t that sound exactly like something the “grown-up” Zach Morris or Travis Birkenstock would say?

“As if” – who doesn’t totally love Saved by the Bell and Clueless? “Whatever!”

Now I can’t get “Rollin With My Homies” out of my head!

Now back to today’s post – As we learned in last week’s episode, Jared Franklin (Breckin Meyer) and Peter Bash (Mark-Paul Gosselaar) have been friends since high school.  The series begins with the two sitting at a diner watching the traffic in Los Angeles while they banter back and forth when suddenly a fender-bender takes place directly in front of them.  Racing out to the scene, they immediately offer their business cards and legal representation to the driver responsible for rear-ending another car.

Why is the driver not responsible for the crash when he clearly bumped into the car in front of his?  Franklin and Bash explain that it is because the driver was distracted by the interactive advertising sign yards ahead flashing images of a sexy young woman.

The young and unconventional attorneys take the case to court and after prompting the beautiful girl in the ad to unbutton her shirt while on the witness stand, thus proving her chest to be guilty of causing an unnecessary distraction to those driving, they win the case against a large and successful law firm.

Witnessing and enjoying the unique techniques of Franklin and Bash, Stanton Infeld (played by Malcolm McDowell) offers the two friends jobs at Infeld Daniels, where he is the senior partner.  Along with their ex-con assistant, Carmen, and their agoraphobic clerk, Pindar, the two join the firm.

Meanwhile, the obvious successor to his uncle, Damien Karp (played by Reed Diamond) takes a disliking to Franklin and Bash and does his best to discredit their antics – but his uncle loves it saying repeatedly that the two remind him of himself when he was younger.

We’re only three episodes in, but so far we’ve enjoyed each episode.  Meyer and Gosselaar have great comedic timing and a perfect on-screen chemistry.  Franklin and Bash live together, party together, and work together, yet never seem to tire of one another.  Their famous “Margarita-Monday’s” have already saved one of their cases and provided them the vision to defend another case successfully.

I’m giving Franklin & Bash another MacTV rating.  It doesn’t quite qualify for the GTV rating that I’d give Justified, Burn Notice, or Bones, but it also doesn’t sit long on my DVR making it a tad better than JFTV.

I’ve started playing a game with each new episode – how many of Gosselaar’s former TV co-stars will land a guest role on Franklin & Bash?  Wanna play?  So far, I’ve already mentioned Garcelle Beauvais…..can you name another?

Tune in tonight for a new Franklin & Bash on TNT. 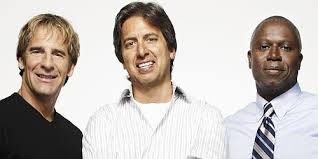 Now, click over and check out Amber’s review of TNT’s Men of a Certain Age starring Scott Bakula, Ray Romano, and one of my favorites, Andrew Braugher.

Remember to stop by the Twitter hashtag (#watchwed) and visit with us about today’s posts and any of today’s television shows that you’d like to see discussed on our series in the future.  Next week we discuss police dramas: Lifetime’s The Protector and TNT’s Memphis Beat.