Perhaps every decade has a right to claim its movies faBOOolous, but the ‘80s reigned supreme with slasher franchise giants such as Friday the 13th and A Nightmare on Elm Street – both of which still live on today in our generation of remakes.

Today, we’re focusing on the 1987 supernatural great, and one of my all-time favorite vampire movies: The Lost Boys. 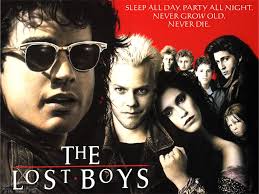 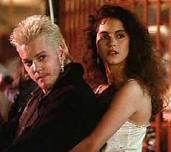 Michael: On their first night in town, the brothers head out to the town boardwalk, where Michael sees Star (Jami Gertz) dancing in the moonlight.  Seduced by her moves, he follows her, where he meets David (Keifer Sutherland) and his friends for the first time.  The next night, Michael runs into David again; only this time, David challenges Michael to join him on a motorcycle ride.  Wanting to impress Star, Michael agrees and later follows the mysterious teens back to their underground lair.  Peer pressure and temptation ensue, and Michael drinks from the wine bottle that David and his friends pass around.

The next morning, Michael is sensitive to the sunlight, and his transformation begins. 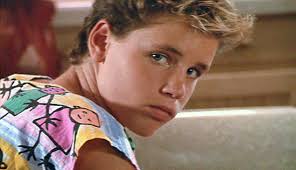 Sam: The younger of the Emerson brothers, Sam, finds solace in a local comic book store on the boardwalk where he meets the Frog brothers: Edgar (Corey Feldman) and Alan (Jamison Newlander).  The Frog brothers claim to be vampire hunters, and provide Sam with tons of reading material to prepare for living in Santa Clara, a town plagued by the night’s creatures.

How else does one explain all of the missing person flyers?

Sam shrugs the crazy brothers off, until later that night when his dog, Nanook, begins growling ferociously at the bathroom door while Sam bathes.  Bothered by Nanook’s reaction, Sam robes up only to find his brother Michael hiding in the darkness.

Spooked by the combination of the Frog brothers’ tale and by Nanook, Sam runs from Michael.  He locks himself in his room, calls his mother, and looks out the window to see his brother floating in the air.  At this point, Michael knows something is very wrong, and he returns to David’s lair seeking answers from his new so-called friends.  Instead, he finds Star, who immediately commiserates with Michael and the two bond (physically and emotionally).

Sam seeks the Frog brothers’ help, but refuses to follow their advice, which is to kill Michael.  Sam does, however, believe them now that Santa Clara is crawling with vampires, and asks for their help in saving his brother.  In the meantime, Sam begins questioning anyone he comes in contact with, including his mom’s new boyfriend, Max (Edward Herrmann).  The Frog brothers accept Sam’s invitation to dinner where they test Max with Holy water and garlic, infuriating Lucy and embarrassing Sam. 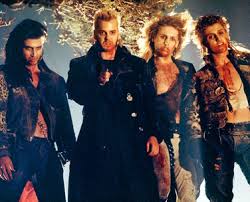 Michael decides to join David and his gang on another outing, even after the group taunted him on a motorcycle ride and forced him to hang from a railroad bridge. This time, he witnesses the young vampires feed on a group of teens at a camp site.  He refuses to kill, but now knows exactly what is happening to him.

Michael returns home, where Sam and the Frog brothers hatch a plan to kill David, clearly the head-vampire.   Things go from bad to worse when their murderous attempt fails, and Michael realizes David will seek revenge and hunt him at nightfall. 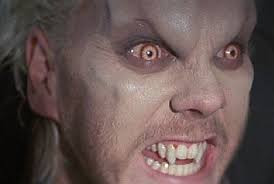 The fight scenes at the end of The Lost Boys were faBOOolously choreographed and had brilliant special effects for its time.  I don’t want to give the ending away for those who have yet to see the movie (are there really those out there who have not seen The Lost Boys?), but will wrap with the famous closing line: “One thing about living in Santa Carla I never could stomach, all the damn vampires.”

And, who can forget Jason Patric and Corey Haim’s blue eyes just before the fade to black?  The closing scene solidified those two as ‘80s heart-throbs.  Right girls? 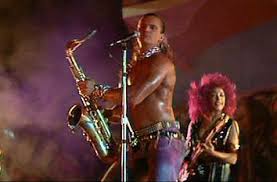 It would be wrong of me to end the post without mentioning the music.  The Lost Boys has one of the best motion picture soundtracks of the ‘80s with musical greats including INXS, popular hit songs such as “Don’t Let the Sun Go Down on Me” and “People Are Strange,” as well as the ever-haunting theme song, “Cry Little Sister.”

Who’s your favorite character in The Lost Boys? Did you guess the head-vampire correctly, or were you surprised at the end?  Did you want a Husky after falling in love with Nanook? What are some of your favorite quotes from this ‘80s classic?  Did you watch any of the sequels?  Do you have another favorite ‘80s scary movie?  I’d love to hear from you!

33 Replies to “Friday FaBOOolousness – The Boo Factor: The Lost Boys”