Comedies took over television in the 1990s with popular sitcoms Seinfeld, Friends, and The Fresh Prince of Bel-Air.  Young viewers also found plenty of programs they could relate to in the ‘90s with the hit teen soap operas Beverly Hills, 90210, Dawson’s Creek, and Felicity.

So, why be surprised with the 1995 blockbuster success of the now classic film, Clueless? 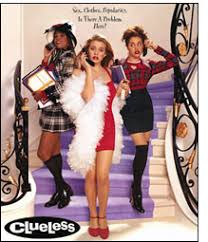 Clueless combined humor with every teen drama stereotype imaginable: like the stress of training for a driver’s license, dealing with parents and step-siblings, partying and drugs, deciding which cliques to join, trying to keep up with style and dress for success, and, most importantly, awkward relationships. 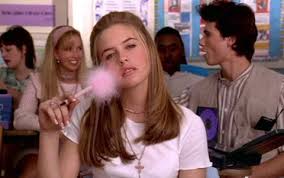 Unknown at the time, Alicia Silverstone immediately gained star-status with her portrayal of Cher Horowitz.  Cher resembled so many of the girls in my school – exaggerated, of course.  Cher was sweet, but superficial and hailed from an extremely wealthy family.  Some would call her spoiled; she did have a rotating closet the size of most living rooms in her father’s (Mel Horowitz played by Dan Hedaya) mansion.

One of, if not the most attractive and popular girls in school, Cher uses her ability to negotiate her way out of all sticky situations.  But, when she can’t talk her way out of a bad grade, Cher decides to play cupid for the single and miserable teacher standing in her way. 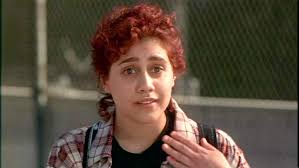 Feeling that match-making is now her calling, Cher then adopts the new girl in school, and plans to transform her into a beauty.  With help from her best friend, Dionne (played by Stacey Dash), Cher befriends Tai (Brittany Murphy) and immediately begins creating another paper-doll cut-out to follow in her footsteps.  She transforms Tai’s hair, clothes, make-up, and attitude – maybe too well. 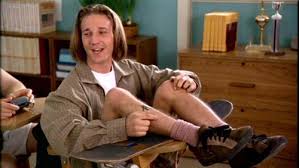 Tai instantly connects with the skater in school (Travis Birkenstock played by Breckin Meyer), but Cher refuses to allow Tai to date Travis; therefore, she hatches a plan to play match-maker with Tai and the popular boy, Elton (Jeremy Sisto), who just so happens to have his eyes set on Cher. 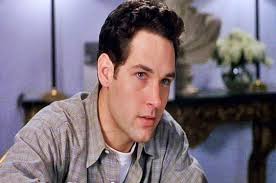 After failing her driving test, failing to successfully pair Tai and Elton, and falling for a gay, Jason Priestly look-a-like hottie (Justin played by Christian Stovitz), Cher crumbles and leans into her older, ex-stepbrother, Josh (played by Paul Rudd). Making matters worse, Tai figuratively slaps her in the face, and Cher decides it’s time to focus on her own life instead of others.  Step one – land Josh.

Everything of course works its way out in the end, but viewers don’t get there without hysterical laughs along the way.  The movie was such a hit, that television producers attempted to recreate the popularity of Clueless with a television series, and cast many of the movie’s actors in the same roles (Stacey Dash as Dionne, Donald Faison as Dionne’s boyfriend, Murray, and Elisa Donovan as Amber, Cher’s nemesis).

Conversations in the’90s would have never been the same without Clueless’ coined phrases: “Whatever” and “As If”.

Can we please bring As If back? I mean, Whatever never left. 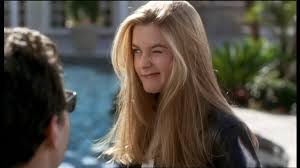 In addition to the words most repeated by teenagers across America, the Clueless writers also provided rich-clueless-valley-girl lines that Alicia delivered perfectly.

Cher: Okay, so you’re probably going, “Is this like a Noxzema commercial or what?” But seriously, I actually have a way normal life for a teenage girl.

Cher: Isn’t my house classic? The columns date all the way back to 1972.

Girl: It’s just like Hamlet said, “To thine own self be true.”

Cher: Well, I remember Mel Gibson accurately, and he didn’t say that.  That Polonius guy did. 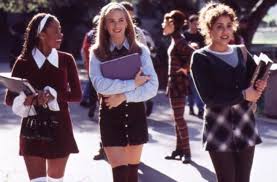 We can’t end the post without discussing the fashion.  High school girls across the country wore plaid mini-skirts with knee-high lace socks and baby doll shoes because of Cher.  What about the white, sheer shirts?  Clogs?  Platforms? C’mon, we all had at least one item in our closets that Cher wore in Clueless.

Cher: Do you prefer “fashion victim” or “ensembly challenged”?

Mel: What the hell is that?

Teenage girls in the ‘90s were definitely fashion victims courtesy of Cher, and we spent too much money on our clothes.

Clueless changed the ‘90s pop culture forever, and launched movie stars Alicia Silverstone, Brittany Murphy (R.I.P.), and Paul Rudd into movie stardom.  Not to mention, Breckin Meyer (Franklin & Bash) and Donald Faison (Scrubs) might not have the television popularity they do today without their supporting roles in Clueless.

Who’s singing, “Rollin with my homies,” right this very second (be honest)?   Do you believe or agree that Clueless is now a classic?  Who do/did you relate to more:  Cher, Tai, Travis, or another character? If you could have one movie phrase that was popular back in the day return now – what would it be and why?  What other ‘90s movies have you watched repeatedly that have changed pop culture forever?  I’d love to hear from you!