Summer is coming to an end, and we have some new programs to sink our teeth into before the fall television series return.  These new shows bring drama galore – police drama, dating drama, and teen drama.  What will you watch?

Against the Wall – Lifetime

Wanting to advance her career in the Chicago Police Department, Abby Kowalski (Rachael Carpani most recognizable for her recurring roles on Cane and The Glades) is faced with a tough decision.  Does she wait for the necessary promotions as a female detective, or speed things up and join the Internal Affairs division?  Abby chooses IA, and her decision causes a divide within her family; a family with a long line of Chicago police officers.

Everyone knows that cops and IA officers do not get along – but what happens when a decision affects your entire family dynamic?

Against the Wall also stars Treat Williams (Everwood), as Abby’s father, and Kathy Baker (Picket Fences, Medium), as her mother.

Following the Internal Affairs division instead of detectives adds a nice twist to the ever popular television police drama.   Find out this Sunday if it’s worth a watch– Against the Wall premieres July 31st.

Hot on the tails of the major motion picture success of No Strings Attached and Friends with Benefits, NBC brings us this new thirty-minute comedy following a group of twentysomethings as they battle the dating world.

Oh, and Ben and Sarah are apparently the “friends with benefits.”  Who wants to bet they eventually decide they are soul-mates?

Produced by the great Brian Grazer (Parenthood and Arrested Development), Friends with Benefits might just make the grade.  Find out when the show premieres August 5th.

The new YA inspired drama: 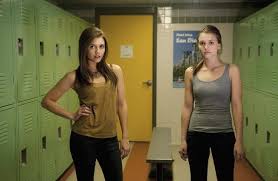 From the creators of Pretty Little Liars, and based on the novel by Sara Shepard, ABC Family brings the young adult audience another teen mystery this August.

Emma Becker learns that she was separated at birth from her identical twin sister, Sutton Mercer (both roles played by Alexandra Chando, As the World Turns).  Emma, a foster-child, agrees to switch places with her twin and live Sutton’s life with her wealthy adopted family while Sutton searches for their birth mother.

Not long into the switch, Emma learns that Sutton has disappeared and she’s faced with the dilemma of telling the Mercer family and all of Sutton’s friends the truth.  Is Sutton in trouble? Why were they separated in the first place?

If the mystery is anywhere near as decent as its predecessor, Pretty Little Liars, TLG is definitely worth a watch.  The Lying Game premieres August 15th.

What do you think? Do any of these shows interest you enough to watch?  Do you think starting in August will help or hurt these shows? Do you know of any other late summer starts?  I’d love to hear from you!

Be sure to go vote for the Tamberny Awards show by clicking here before July 29th!  And, just to show how fun Amber and I can be….

13 Replies to “Tele-Tuesday – New to Summer: Better Late Than Never”