This week, Amber West and I are flipping channels over to ABC and sharing our Why It’s Worth a Watch Wednesday reviews of Desperate Housewives and Body of Proof. 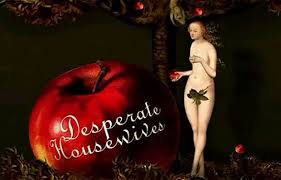 We all mourned the loss of the ‘80s night-time soap operas Falcon Crest, Dallas, and Knots Landing.  But in 2004, the genre was revived with Mark Cherry’s Desperate Housewives when the television world was introduced to a close group of residents on a unique street in a fictional town. 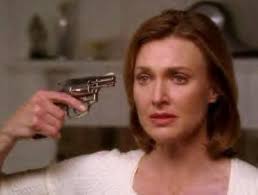 The series begins with the mystery surrounding Mary Alice Young’s (Brenda Strong) suicide, one of the housewives on Wisteria Lane.  Her death leaves behind devastation to her closest friends and her family (husband Paul, played by Mark Moses, and son Zach).

Mary Alice narrates Desperate Housewives at the beginning and at the end of each episode; she shares her friend’s secrets and paints a picture for the audience explaining how and why the housewives make the decisions they do.

The series starts with Susan’s recent discovery that her husband Karl (Richard Burgi) has cheated on her.  She files for divorce and immediately takes a liking to the new neighbor, plumber Mike Delfino (James Denton), and marries him twice.  Susan is the classic train wreck – she’s quirky, loving, and genuine; but nothing seems to go her way.

Lynette escapes her rough childhood by using her drive and intelligence to obtain a degree in Advertising.  She meets her husband Tom (Doug Savant) in college, and Lynette decides to change her career path to a stay-at-home-mom once she and Tom start a family.  Four kids later, the cabin fever sets in and Tom and Lynette switch roles – she goes back to work and he becomes Mr. Mom.

Lynette’s ambitions take over and she begins to man-handle her husband constantly (think an alpha-dog or a my-way-or-the-highway sort of relationship).  Tom loves Lynette and for the longest time doesn’t fight back, until….sorry, no spoilers here.

Bree is described as Wisteria Lane’s Martha Stewart-Stepford Wife.  She’s a perfectionist and an obsessive compulsive with a side of neuroses.  A gun-toting Republican, Bree marries her first husband Rex (Steven Culp) and starts a picture-perfect family; until, that is, he cheats on her.  Bree files for divorce, Rex dies, Bree marries Orson Hodge (Kyle MacLachlan), and Bree later files for divorce.

In and out of relationships and marriages, Bree finds her solace in the kitchen.  She briefly owns and operates a gourmet catering business until Rex’s son, from an affair, blackmails it away from her.

Abused by her step father, Gaby flees Texas and never looks back.  She takes her beauty to New York, its runways, and its magazine covers.  After years of a successful modeling career, Gaby meets her husband Carlos (Ricardo Antonio Chavira), a self-made wealthy and cut-throat businessman.

These two have had it all – poverty and wealth, affairs and loyalty, blindness and beauty, superficial happiness and familiar bliss.  Kinda.  The laughs never stop with Gaby and Carlos; they are by far my favorite duo on the lane.

Many other housewives have lived on the lane over the years including: Edie Britt (Nicollette Sheridan), the beautiful yet spiteful real estate agent, often times regarded to as the “neighborhood slut” by many of the girls for bedding Susan’s ex; Betty Applewhite (Alfre Woodard), the neighbor who keeps her son locked up in the basement; Katherine Mayfair (Dana Delany), the once-

surrounding the identity of her daughter; Angie Bolen (Drea de Matteo), the housewife running from the mafia; Renee Perry (Vanessa Williams), Lynette’s college best friend and recent divorce’ trying to define herself without her famous baseball player husband; and Karen McCluskey (Kathryn Joosten), the senior citizen neighbor who supports, babysits, and provides a bit of a reality check to the over-the-top housewives. 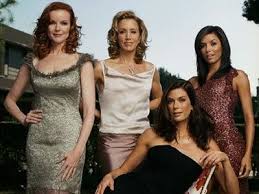 Desperate Housewives is a television dramedy at its finest.  For this reason, I must award the ladies of Wisteria Lane with a MacTV rating.  Guilty Pleasure?  Check.  Not Perfect?  Check?  Satisfying?  Definitely, Check.

Honestly, can’t you just picture Susan, Lynette, Gaby, and Bree curling up to watch Falcon Crest with a warm bowl of Mac-N-Cheese?  Okay, well maybe not Bree….unless it was baked gourmet style with green chilis and bread crumbs.

From watching each and every one of the seasons, this eighth and final season should close with a bang.  The history of Desperate Housewives proves that no one is safe.  It wouldn’t be out of the ordinary for some of the housewives to die or even go to jail.  It’s doubtful that Cherry will wrap everything up with a pretty red-bow, and for that, we thank you!

Here’s to a doozy of a series finale coming this spring…..

What do you think? Have you watched Desperate Housewives?   Who is your favorite character? How do you think Mark Cherry will close out the series?  I’d love to hear from you!

Now click over to Amber’s blog and check out her review of a former Wisteria Lane housewife’s new show, Body of Proof.

Come back next week when Amber and I talk some laughs with a double dose of TV’s new comedies: Suburgatory, New Girl, Up All Night, and 2 Broke Girls.

16 Replies to “Why It’s Worth a Watch Wednesday – Just How Desperate are They?”