This week, Amber West and I are visiting the fairy tale world, and we’re sharing our Why It’s Worth a Watch Wednesday reviews of Grimm and Once Upon a Time.

NBC’s new drama based on the Grimm’s Fairy Tales follows a detective as he balances his life solving murders and learning that he comes from a long line of criminal profilers (Grimms) responsible for protecting the people of the world against the supernatural – Grimm versus Evil.

The first episode of Grimm begins as a sorority girl departs from her house wearing a bright red hoodie and listening to the Eurythmics’ “Sweet Dreams” as she sets out for her morning jog through the woods.  The opening scene immediately screams modern-day Little Red Riding Hood, right? 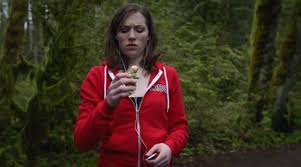 While on her run, the girl spots an odd figurine positioned on a rock.  She stops to investigate when she is suddenly tackled by something with lightning fast speed, and the viewers can only assume she’s going to die.

Next, we meet the Grimm on what should be the happiest day of his life (Detective Nick Burkhardt played by David Giuntoli); instead, it might just be the beginning of the end.  Walking out of the

jewelry store where he just purchased an engagement ring for his girlfriend (Juliette played Bitsie Tulloch), Nick notices a beautiful blonde walking down the street suddenly transform into nasty looking creature.  He shakes it off as his eyes playing tricks on him.

Nick pockets the diamond ring, and he and his partner, Hank Griffin (Russell Hornsby), drive out to the scene of a crime where they discover a jogger has been ripped apart in the woods.  Unfortunately, there isn’t enough left of the victim for identification purposes.  The detectives assume an animal is responsible for the attack, although they can’t seem to locate any animal tracks – only boot prints.

Later that night, Nick returns home anxious to propose to Juliette only to discover his aunt has stopped by on a surprise visit.  After a cryptic, “we need to talk,” Nick and his aunt go for a walk where she begins to tell him that his family has a secret.  His parents didn’t die in an accident; they were murdered.  Why is she telling him this now?  She is dying, and the Grimm powers will pass to him in just a matter of days if they haven’t already.

Before she can tell him the complete story, Nick and his aunt are attacked by the Reaper of the Grimms.  Nick can’t believe his eyes and he opens fire on the monster shooting him dead, but not before the attack renders his aunt unconscious.

Reeling from the day’s events, Nick walks into his aunt’s travel-trailer where he finds an arsenal of bizarre weapons and an ancient family book revealing his destiny.   As most of us would, Nick decides to keep his secret from his girlfriend and his partner — for now, anyway.

The next day, Nick and his partner are called to another crime scene.  This time, a younger girl with the initials R.H. has been kidnapped .  Coincidence?  Using his new Grimm powers, Nick tracks down Eddie Monroe (Silas Weir Mitchell), a reformed Big Bad Wolf.   Monroe can see Nick as a Grimm immediately, and he reluctantly agrees to help Nick understand the mythology. 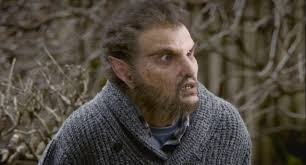 Monroe also agrees to help Nick track down the Big Bad responsible for the little girl’s disappearance.  He drives Nick out to the woods, sticking his head out the window along the way sniffing out the Big Bad’s scent.

Afraid of what might happen if he gets too close, Monroe retreats as soon as they locate the cabin where his nose has indicated the Big Bad is hiding the girl.  Nick calls Hank out to the woods, but explains he didn’t call for any additional backup because he “already cried wolf once” wasting the department’s resources.

Hank doesn’t understand how Nick tracked this man down, but he believes his partner when he overhears the suspect humming the exact same song that had been playing in the jogger’s ear buds at the first crime scene, “Sweet Dreams.”

The take down ensues, little R.H. is rescued, and Grimm ends with the Marilyn Manson version of “Sweet Dreams” — I’ve got to know what’s inside you.

Yet another nice touch.

Obviously, after just one episode, it’s too early to award Grimm with anything other than the SSTV rating.  This television series is definitely sitting on the hot plate and is warming up; but, the water is not hot enough for us to drop in the pasta to upgrade the rating to MacTV, but it is showing potential after just one hour.

What do you think? Did you watch the premiere of Grimm?   Do you think the dramatized fairy tales will last on television today?  I’d love to hear from you!

Now click over to Amber’s blog and check out her review of ABC’s new hit, Once Upon a Time.  Will Emma accept her destiny and return magic to Storybrooke allowing the fairytale characters to come back to life and return balance to the charmed city?

We didn’t laugh enough last week, so come back next week when Amber and I review a few of our favorite comedies.

34 Replies to “Why It’s Worth a Watch Wednesday: Grimm Versus Evil”