Will audiences ever tire of watching high school comedies and satires?  Probably not.  After all, we all survived the glory years, so why not reminisce?  Some of us were geeks, some were popular, but we can all relate to certain teenage characteristics one way or another.

The Titter Factor has already revisited the nineties classic, Clueless; but in order to truly appreciate the high school movie greats, we still plan to ride the wave with Jeff Spicoli in the Fast Times at Ridgemont High.  But today, we remember the late seventies with the 1993 hit that left us Dazed and Confused. 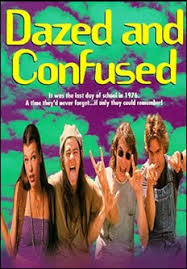 First, we have to discuss the music.  It all starts with the music, and Dazed and Confused opens with the all-time great “Sweet Emotions” by Aerosmith.  Only the best films take us back in time with excellent tunes.

The Dazed and Confused soundtrack continues to do just that with classic hits including:  “Slow Ride” by Foghat, “School’s Out” by Alice Cooper, “Tush” by ZZ Top, “Love Hurts” by Nazareth, “Rock and Roll All Nite” by Kiss, and “Tuesday’s Gone” by Lynyrd Skynyrd.  The movie’s soundtrack was so red-hot, that a second album followed in 1994 leaving us Even More Dazed and Confused featuring Edgar Winter Group, The Steve Miller Band, Peter Frampton, and more Alice Cooper and ZZ Top.

Next, it’s all about the cast.  Writer and Director Richard Linklater hired mostly unfamiliar actors at the time to star in his film depicting a group of Lee High School Fighting Rebel seniors hazing the incoming freshman in a small Texas town back in 1976.

Randall “Pink” Floyd played by Jason London (not to be confused with his twin brother Jeremy) – the football quarterback experiencing a bit of an identity crisis.  Should Pink do drugs and party the summer before his senior year, or sign the football team’s pledge that he will not do anything to jeopardize the team?  He makes his decision late one night at the 50-yard line when he calls out his play, “Marijuana on one; Reefer on two.”

Slater played by Rory Cochrane (CSI Miami) – most of the seniors smoke marijuana in the movie, but Slater is THE stoner of the group.  He loves calling “Shot Gun!” as they drive around town and he rarely leaves the scene without saying, “Check ya later!” 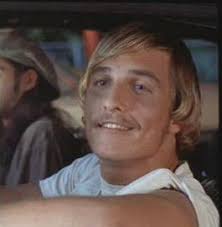 David Wooderson played by Matthew McConaughey (yes, THE Matthew McConaughey) – the token graduate still hanging around with the high school crowd.  He loves his Chevelle and he loves women, particularly the fact that while he gets older, the high school girls “stay the same age.”  He steals the show with his tight orange pants, his soft repetitive laugh, and his famous line, “Alright, Alright, Alright.”

Fred O’Bannion played by Ben Affleck (yes, THE Ben Affleck; is there an echo in here?) – the repeat senior, the “tool” of the group.  He’s not only oblivious to the fact that it’s not cool to flunk, he actually looks forward to hazing another class of incoming freshmen.  Loser.

Darla Marks played by Parker Posey (Scream 3) – the Queen “B”; the senior girl itching to stake her claim as LHS royalty.  Darla’s character had some of the film’s best lines: “Lick me, all of you!” and “Wipe that face off your head b*#$%.”  Posey’s comedic timing is impeccable, and her stumble at the kegger while trying to be cool has honestly happened to the best of us.  “Air raid!”

We recognize many of these names today, don’t we?

Mitch Kramer played by Wiley Wiggins – little brother of Jodi Kramer (Michelle Burke, Coneheads), Pink’s girlfriend.  Mitch not only endures the worst beating by the seniors, but his courage earns him an invite to join Pink and the boys at the big keg party.

Sabrina Davis played by Christin Hinojosa – random freshman girl picked up by Jodi Kramer to participate in the hazing activities.  Her go-with-the-flow attitude also scores her an invitation to join the seniors later that night.

There are other freshmen in the movie like Kevin (Shawn Andrews) and Carl (Esteban Powell), but the movie primarily focuses on the senior class.

Finally, where would a movie be without a good story?

We watch as the seniors drive around town, cruise up and down the strip, hang out at the drive-in, play pool, drink beer and go one beer runs, smoke cigarettes (and a bit of pot), and smash mailboxes with a baseball bat, all while making their way to the party at the Moon Tower and to purchase Aerosmith concert tickets.

Most of us can relate to the “nerd” crowd attempting to fit in with the “cool” crowd, to the “fresh meat” trying to outsmart the seniors and survive the traditional hazing night, and to the ugly effects of what it feels like to have partied all night long.

Dazed and Confused is a cult classic.

Grab your favorite paddle, and….

Have you seen Dazed and Confused?  Which character is your favorite or can you relate to the most? What are some of your favorite quotes from the movie?   Have you played the popular drinking game while watching the film (taking a shot each time Mitch touches his nose)?  Were you hazed or did you haze anyone in high school/college?  What movie is your favorite flick about high school?  I’d love to hear from you!

On a personal note, in college I drove a beverage cart around a golf course in my home town.  Matthew McConaughey’s brother was a member at the club.  One weekend Matthew came to play in a tournament with his brother, and when I filled his cooler with beer, he literally said “alright, alright, alright.”  I think I turned every shade of red and it took everything to hold in my squeal.  I kid you not.  It was awesome.

As you can see, this film holds a special place in my heart.

13 Replies to “Friday FabOoolousness – The Titter Factor: Dazed and Confused”