This week, Amber West and I review a few of the more established comedies on NBC and CBS in a Why It’s Worth a Watch Wednesday: Battle of the Network Funnies.

Who will win:  Monday nights on CBS with How I Met Your Mother and Two and Half Men or Thursday nights on NBC with Parks and Recreation and Community? 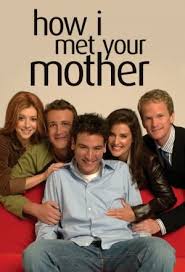 We begin with the popular sitcom, How I Met Your Mother.  Commonly abbreviated to HIMYM, the series follows the main character Ted Mosby (Josh Radnor) as he narrates to his children in the year 2030 the story of how he met their mother.  Well, Josh doesn’t narrate, Bob Saget does.

HIMYM has a true ensemble cast as each character plays just as important a role as Ted.  But why do we really love this show?

There are the character quirks including: Barney’s womanizing ways with his “hot/crazy” scale, or his “Bro Code” justifications, or even his insisting everyone “suit up” before they go out on the town; Robin’s extensive misuse of the word ‘literally’; and Ted’s constant romantic gestures as he looks for love, including stealing a blue French horn for Robin during their courtship.

There are the enduring moments like when Ted finds out his parents are divorced; or when Marshall struggles with the decision to take a position as a corporate lawyer instead of working for an environmental cause; or when Barney sets out on a mission to learn the true identity of his father (once he discovers Bob Barker is indeed not his biological dad).

There is the comedy: Robin’s teenage Canadian pop-band flashbacks; Marshall and Barney’s on-going Slap game (Marshall earned five free slaps, and he saves them for when Barney least expects it); and the group’s hilarious interventions for one another.

But, most importantly, we love the realistic friendships between all of the characters.  We’re watching as these friends experience life together; as they celebrate Lily and Marshall’s pregnancy; as they mourn the loss of Marshall’s father; and as they bounce back from multiple broken romantic relationships.

It’s reasons like these that I award How I Met Your Mother with a MacTV rating.  As far as sitcoms go, it ranks among the best available on TV today.  Can the show survive many more seasons?  Probably not.  But will we tune in until Ted meets the mother of his children.  Absolutely.

A half hour later on CBS, another sitcom veteran airs on millions of television sets across the globe with Two and a Half Men.  Definitely not as enduring as HIMYM, Two and a Half Men promises comedy a bit more raunchy than anything else on TV (Archer wins most raunchy).

The series follows Charlie’s sexual escapades, Alan’s incessant need to mooch off of his brother, and Jake’s hilarious adventures through childhood and the teenage years.   But, despite the title, Two and a Half Men wouldn’t be the same without the women: Alan’s ex-wife Judith (Marin Hinkle); Charlie’s foul-mouthed housekeeper Berta (Conchata Ferrell); the Charlie obsessed next door neighbor Rose (Melanie Lynskey); and the Harper matriarch, Evelyn (Holland Taylor).

Speaking of women, the Harper brothers have dated a few familiar females over the years including Courtney Thorne-Smith, Judy Greer, and Jenny McCarthy.  Ironically, the most fruitful male/female relationship on the show is between Charlie and his therapist (played by Jane Lynch).

We didn’t watch Men religiously until we caught the show in syndication.  For many Saturdays in a row, we sat and caught up with the Harpers, laughter guaranteed in each episode.  But, sadly, a few real life mishaps forced the show’s creator to kill off the character of Charlie and replace him with a fresh face: Ashton Kutcher.

Season nine begins at Charlie’s funeral – and BRAVO Chuck Lorre and other Men writers.  The funeral scene was absolutely brilliant.  Many past guest stars return and ex-girlfriends applaud Charlie’s death (in a respectful, yet Charlie Harper deserved way).  The best of the half hour was undoubtedly the return of Rose and her eulogy, or was it a confession?

After the funeral, Alan reluctantly prepares to move out of the house he can no longer afford without his brother’s money.  Suddenly, there is a wet, sad man standing on his patio.  Alan opens the door, literally and figuratively, when he meets Walden Schmidt (Kutcher) after an attempted suicide in the ocean.

It just so happens that Walden is rich like Charlie, and agrees to buy the beach house.  Before we know it, he hires Berta to stay on as his housekeeper and he also invites Alan to move in for as long as necessary. 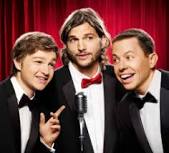 Some like the change, some don’t.  But, the new direction was enough to bring Men back to our DVR and we haven’t removed the future recording setting just yet.  For that, I award Two and a Half Men the JFTV rating.  The series isn’t great for us, but we keep digging our hand right back down into that greasy bag of chips.  Heck, before we know it, we’ll probably suffer chest pains much like Charlie’s character on multiple occasions.

So, what do you think?  Do you watch HIMYM or Two and a Half Men?  Which network airs the best comedies: CBS or NBC? How much longer can the series last before Ted meets his future wife?  Do you like the addition of Ashton Kutcher on Men?  I’d love to hear from you!

Now click over to Amber’s blog and check out her review of NBC’s Thursday night laughs, Parks and Recreation and Community.

Come back next week when Amber and I review AMC’s Mad Men and The Walking Dead.