Television in the 1980s offered a bit more substance than today’s reality fixation.  Honest- to-goodness family programming dominated network TV’s primetime hours instead of the incessant need to watch individuals hurt themselves while rushing through an obstacle course or young talent’s hopes shatter in recorded auditions.

Growing up, Sunday nights at grandma’s house included a hot family meal with all of our aunts, uncles, and cousins, followed by bonding time in front of the TV with shows like Life Goes On and Our House.  Remember those? 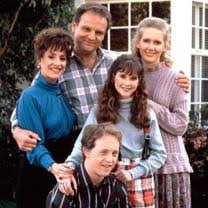 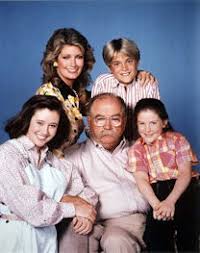 After homework and dinner Monday through Friday, we curled up on the sofa with mom and dad learning valuable, although funny, lessons with hit sitcoms including: 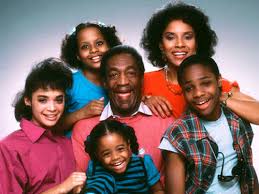 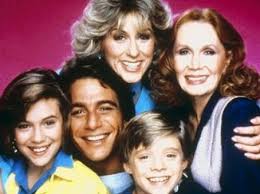 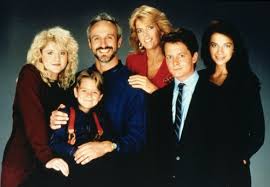 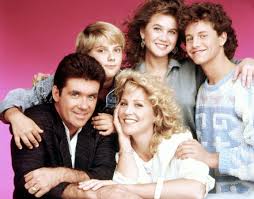 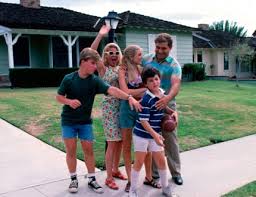 These series all share wonderful messages.  Audiences watch as fictional families learn to adjust to difficult situations like understanding Corky’s disability in Life Goes On, or recovering from the death of a parent in Our House.  We discover how serious dyslexia is when Theo Huxtable is diagnosed in The Cosby Show, and just how harsh words can be as Carol Seaver suffers constantly from jokes about her weight and her intelligence throughout Growing Pains’ run.

Not all of the storylines in these popular sitcoms focus on family units prevailing through hard times.  Sometimes the stories lighten the mood and take us back to a happy place.  For example, viewers reminisce about first loves and conquering true love as Kevin Arnold crushes on Winnie Cooper in The Wonder Years, or as Tony Micelli and Angela Bower prove that money really doesn’t matter when searching for the one true connection in Who’s the Boss?.  We also learn to value the importance of friendships such as Mike Seaver and his buddies Boner and Eddie in Growing Pains, as well as Kevin and Paul in The Wonder Years.

But perhaps one of the best messages portrayed by all of these family sitcoms is the importance of education.  Each and every one of these series follows a character as they attend college.  Alex P. Keaton obsesses over one day leading the Republican party in Family Ties and attends college where he studies economics.  Even Kevin Arnold’s hippie sister, Karen, enrolls in college on her way to a M.R.S. degree (she gets married after her freshman year), and Mike Seaver overcomes his high school classroom struggles and takes a few college courses before quitting to pursue an acting career.

Sadly, families today with young children don’t have numerous options on the television similar to these ’80s sitcoms, leaving many with the decision to simply not watch TV.  While there’s nothing wrong with reality programs, what lessons do they teach our children?  That they can wear protective clothing and run through an obstacle course for money?  Or, that they can lay their hopes and dreams on the line to be the next big talent only to run the risk of being publicly humiliated, or that laughing at others’ failures is okay?

Reality TV is fun.  Most times, reality television is even clean enough for the family to watch together; but wouldn’t the return of family programming similar to these ’80s sitcoms make us smile?  We have a few popular sitcoms about families airing today (Modern Family and Parenthood come to mind), but aren’t these shows directed more toward adult humor versus good old-fashioned family values?

Just something to think about…

26 Replies to “Tele-Tuesday: Remembering the Family Programs of Years Past”