This week Amber West and I hop aboard the ever popular Young Adult (YA) train, and review two shows targeting the younger audiences on Why It’s Worth a Watch Wednesday.  Amber takes us down a musical lane with Glee, while I attempt to solve yet another mysterious drama on ABC Family, The Lying Game.

From the creators of Pretty Little Liars, and based on the novels by Sara Shepard, The Lying Game follows twin sisters, Emma Becker and Sutton Mercer (both played by Alexandra Chando).  Currently in the second half of season one, we’re still not sure how the twins learn that they were separated at birth, but they do and they find each other online and communicate via Skype.

Living in an abusive foster home in Vegas, Emma agrees to switch places with her twin and live Sutton’s life in Phoenix with her wealthy adopted family, allowing Sutton the time to travel to California and search for their birth mother.  Not long into the switch, Emma learns that Sutton is quite the miserable person to be around.  She’s known around school as the mastermind behind “The Lying Games” – lies that persecute others and terrify them from ever crossing Sutton again.

Emma immediately bonds with her younger sister, Laurel (played by Allie Gonino), and her mother (Helen Slater, The Legend of Billy Jean) and father (Andy Buckley, The Office), repairing the seemingly damaged relationship the adopted family had with the spoiled and entitled Sutton.

The only people it appears that Sutton didn’t callously cross are her two best friends – Char (Kristen Prout) and Mads (Alice Greczyn, Privileged).   While the two girls notice something is drastically different with Sutton, they continue to love her unconditionally and stand by her – even when Emma (as Sutton) breaks up with her boyfriend and starts publically dating the town’s bad  boy, Ethan (played by Blair Redford), who also happens to be the “real” Sutton’s secret boyfriend.

After a short amount of time, Emma loses contact with Sutton and fears she has disappeared.  Emma, being the nice and sweet girl that she is, is faced with the dilemma of telling the Mercer family and all of Sutton’s friends the truth.

Of course, every time Emma comes face to face with the reality of telling anyone outside the circle (only Sutton, Emma, Ethan, and Mads’ brother know the truth about the twins and the “switch”), Sutton reappears with one excuse after another and spews rude comments.  It doesn’t help that everyone loves the “new” Sutton, or Emma rather (even if they don’t know that there is two of them), and Sutton can’t stand it, claiming Emma has ruined her life.

Ethan disagrees; he feels that Emma has fixed so many of the damaged relationships that “Hurricane” Sutton left behind, which is one of the reasons he dumps Sutton for Emma.  Of course, his brother (police officer Dan, played by Tyler Christopher, General Hospital) warns Ethan to stay away from her all together.

Oh, and before we continue, here are a few other characters everyone should know: Justin (Randy Wayne) is Laurel’s boyfriend, a boy claiming to have lost both of his parents in a car wreck; but who later fesses up and tells Laurel why he really came to town – to get answers from her father, the man responsible for his mother’s death.

We also must introduce probably the second biggest villain of the story (behind Sutton) – Mads’ dad and District Attorney, Alec (played by Adrian Pasdar, Heroes).  Alec is also the life-long best friend of Sutton’s adopted dad, Ted, and Sutton’s godfather.

Alec clearly knows the answer to most of the secrets around town – he knows about both Sutton and Emma, and he knows what happened and why at their birth.  He also likes to hold “truths” and good favors over people’s heads to get them to do what he wants, like in the case of Ethan’s brother, Dan, and Char’s boyfriend, a juvenile delinquent.   But why?

And finally, we must discuss the two Annies: Annie number one has been locked away in an insane asylum for years, having never recovered from the death of her daughter.  And then there is Annie number two, also known as Rebecca (played by Charisma Carpenter, Buffy), perhaps the woman with the answers to all of Ted and Alec’s secrets.

Rebecca recently returned to town, looking for a fresh beginning. She obviously knew Ted and Alec in high school, but doesn’t want to discuss the past.  She’s actually quite adamant about not reminiscing with Alec and Ted, leaving us to believe the two friends with tons of secrets may have finally met their match.

The Lying Game has layer after layer of secrets and mysteries:

Who are Sutton and Emma’s biological parents?  I have my guesses…

Why were they given up at birth?  We already know how they were separated…

Why did Ted run out of an operation that cost Justin’s mother her life sixteen years ago?  I have my suspicions…

The twists and turns involved in the plot makes The Lying Game definitely worth a watch, even if I do think I’m starting to figure out the mystery.  Despite the show’s targeting the YA crowd, this thirty-something loves to watch, claiming it is perfect research for a YA mystery writer.

But where does TLG rank on the WatchWed ratings scale? 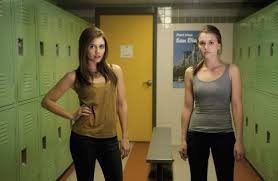 The Lying Game deserves a JFTV rating – it’s not as tasty as the hot and delicious Mac-n-Cheese we love around here (like the YA MacTV rated Teen Wolf and Pretty Little Liars), but it does satisfy our tummies once an hour every week like our favorite candy bars.  Seriously, 250 calories a week isn’t bad…is it?  Nah!

What do you think? Do you watch The Lying Game?  Who do you think are Sutton and Emma’s parents?  Is someone really threatening the girls, or is this just another one of Sutton’s Lying Games?  I’d love to hear from you!

Now click over to Amber’s blog and check out what she has to say about Fox’s hit musical, Glee.

Come back next week when Amber and I review a few of cable’s returning police procedurals: TNT’s Southland and A&E’s Breakout Kings.

11 Replies to “Why It’s Worth a Watch Wednesday – What’s Real, and What’s The Lying Game?”