He’s back!  Writer and blogger Andrew Mocete struck gold with his first Tele-Tuesday guest post (When TV Makes a Wrong Turn) and I knew that we must have him back.  Andrew shares our passion for fine television programming, and today he hopes to bring forth a solid debate among two of our Thursday night must-sees: Person of Interest and The Mentalist.  It’s possible that Andrew might ruffle a few feathers here, but he also may be on to something…

Sorry Mentalist fans, but it’s the truth. In less than one season, Person of Interest has blown away The Mentalist. And let me tell you, I’m just as surprised as you because I do not like dramas on CBS. Of the shows I’ve tried over the years, they all have a great gimmick, but after a few weeks, I feel like I’m watching the same episode. That’s great for the casual viewer, but for someone like me who will watch a whole season, there needs to be some kind of story progression and character development. In that respect, Person of Interest succeeds on both levels where The Mentalist doesn’t. I’ll explain.

When I saw The Mentalist pilot, I thought I discovered my new favorite show. I don’t remember the details of the murder case, what stuck was the origin of Patrick Jane.

He was a psychic of celebrity level fame who appeared on television and was available for private counsel. For a price. The truth was, Patrick was a con man using his superior powers of deduction to manipulate people into thinking he was psychic. It made him cocky, and during a TV interview he was asked his opinion of serial killer Red John. Patrick chose to ridicule him. Red John’s response to this was to murder Patrick’s wife and daughter. Since then, Patrick has abandoned his life as a psychic and uses his gift to help the California Bureau of Investigation (CBI) in the hopes of one day crossing paths with Red John to exact his revenge.

Is that not an awesome origin story? And it was all in episode one. Well, guess what, we’re in season four and that’s still the most information we’ve gotten towards the mystery of Red John.

So far there have been two to three episodes per season that have something to do with Red John and while events have happened, story arc-wise, the progression has barely moved. The most interesting plot involved the team’s learning of a mistake Red John made when he was a rookie killer.  A mistake that could reveal Red John’s identity. Of course, this didn’t happen (I wasn’t expecting that big a revelation) but once again Red John stayed ahead of everyone and the team learned nothing useful.

Red John is as formidable an enemy there is and he views Patrick as a worthy opponent. Why, then, is Patrick still running in place waiting for what Red John does next? How many seasons do I have to wait for Patrick to do something that unbalances Red John? The creator of the show has said Patrick won’t defeat Red John until the end of the series. I can accept that, but I don’t know how many more episodes starring Red John’s unending supply of accomplices I can take.

Even though Red John has been disappointing, Patrick’s relationship with his partner, senior agent Teresa Lisbon, is awesome. She is the sole person Patrick cares about more than revenge on Red John. And she too is willing to go to great lengths to protect him. I wish more of this connection was explored, not necessarily in a romantic way, but in a way that tests the limits of their relationship.

A standout episode this season involved Patrick losing his memory and reverting to his old self, minus the knowledge of the deaths of his wife and daughter. At the end of the case, Lisbon has a choice to make. Leave Patrick the way he is or get him back his memories. Of course she chose the latter because she believed the man Patrick became as a result of Red John was a better Patrick despite the circumstances. And the decision brought her real pain because she had to see her friend go through the worst trauma of his life again. I want more of that kind of depth. Notice I’m not talking about the supporting cast. That’s because they’re boring, which is a shame because Tim Kang, Owain Yeoman and Amanda Righetti are great actors. They just don’t get much material to work with. In four seasons of getting to know them, I still wouldn’t care if they were wiped out for new people. Not good.

I think The Mentalist just needs to focus on its strengths. Put Patrick and Lisbon in more intense situations, make the other detectives an integral part of the team and move the Red John story FORWARD. Think I’m asking for too much? Remember The X-Files? They pulled off everything I want from The Mentalist fabulously.

Person of Interest also has an awesome gimmick: solving a murder before it happens courtesy of The Machine that spits out the social security numbers of the victims. Are they good or bad? Well, that’s also part of the mystery. Beyond that, there’s quite a bit going on with the story.

Main characters, Reese and Finch have an interesting relationship. It’s unclear if Finch, the creator of The Machine (The Brains) and Reese, ex-badass (The Brawn) really like each other, but they recognize the important role they play in the work they do. Will they always agree? And Finch is as much a mystery to Reese as he is to us. What is he hiding and how will it affect Reese if he finds out? Definitely sets the stage for lots of conflict. Yay for conflict! Person of Interest hits the mark on the supporting cast too. Detective Lionel Fusco starts out the show as a dirty cop Reese and Finch blackmail to be their man on the inside. He’s shown signs of changing for the better, but maybe that’s just because he doesn’t want to go to prison.

If that wasn’t a sticky enough situation, Fusco’s partner, Detective Carter, is on the trail of the mysterious vigilante of NY. She’s extremely smart and it’s only a matter of time before she catches up with Reese and Finch. What will she do when she finds out Fusco’s been working for them this whole time? Sounds like ingredients for conflict to me. Whee! 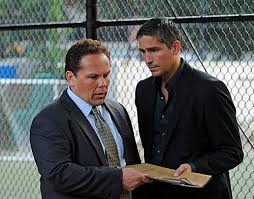 Early on, they dropped hints about a strange case known only as “Elias M.” and by episode seven those clues were brought together to put a face on who the case was about. In other words: the story moved forward giving Reese and Finch an arch nemesis. And we all know the kind of conflict those maniacs can bring. I’m glad they unmasked Elias M early because now something new will have to happen when they cross paths.

I’m expecting a lot more surprises from Person of Interest and unfortunately none from The Mentalist.

So, what do you think? The Mentalist or Person of Interest? Choose your side in the comments!

First, a big THANKS to Andrew! His guest post couldn’t have come at a better time.  This week is a big birthday week for me, and Andrew has helped lighten my load so that I can focus my time on editing my manuscript, cleaning the house for my upcoming house guests, and preparing to spoil myself.

Please be sure and check out Andrew’s blog and learn more about him here.  Andrew thought we (Amber West, Jen Kirchner, and I) were joking when we donned him the Twitter Hashtag, #MrMoceteSpeaks…but we weren’t kidding; when he speaks, we listen.

I’ll save most of my thoughts for the comment section, however I can’t move forward without mentioning that unlike Andrew, I enjoy CBS dramas.  Hawaii Five-0 and Criminal Minds are two of the first that come to mind, in addition to Person of Interest and The Mentalist.  That’s right – I adore Patrick Jane and The Mentalist, despite the fact that many of Andrews’s points also rang true for me.

I also love the idea of characters in television dramas having arch nemeses in addition to weekly storylines (McGarrett has WoFat, to Patrick Jane’s Red John, and to Reese and Finch’s Elias M.); and similar to Andrew, I like to see the progression of said storylines instead of ignoring these arcs all together week after week.

Bring on Red John, The Mentalist!  We can handle it, and we’ll probably even stick around after the fact.  Just sayin’…

25 Replies to “Tele-Tuesday: The Machine versus The Mentalist, Guest Post via Andrew Mocete”