The results of our first Reader’s Choice Tele-Tuesday polls are in.  Last week, we asked our readers one simple question: if you could watch only one show per night, what would it be?

If we’ve learned anything over the years, it’s that as time changes, people change.  Last March, we blogged about our 2011 Pick Per Night television series.  But because the networks update their television schedules drastically over the course of twelve months, our tastes as viewers change as well.  While some of these programs still air today, most of our nightly favorites have changed because of the revolving door of television series.

The series begins when a teenager’s remains (Alison) are found one year after her mysterious disappearance.  This event brings together her four former best friends (Aria, Emily, Spencer, and Hanna), who had drifted apart following that fateful night.  Alison was the glue that held the girls together, the leader of the high school clique.  As the episodes progress, viewers see flashbacks of Alison’s viciousness and many of the secrets that she holds over everyone’s heads – not a nice girl.

After attending Alison’s funeral, the four friends reunite outside the chapel when each of their cell phones ring – they’ve received their first threatening text message from “A” – and the mystery begins: Who killed Alison? And, who is “A”?

Each of the girls have oodles of conflict surrounding them individually, even without “A” threatening their every move.  Throw in the suspicions the police and their parents have regarding their involvement in Alison’s murder, and the lies they continuously try to hide despite “A’s” best efforts, and Pretty Little Liars doesn’t bore its viewers – it has twists and turns week in and week out.

Reader’s Choice: Castle.  We’re really not surprised that Castle won Monday night with 32% of the vote; really, we’re not.  But we like to go against the grain sometimes, and that’s why Tele-Tuesday picked a show that we feel more people should check out with Pretty Little Liars (which earned only 3% of the vote).  We thought Hawaii Five-0 would come in second, but that honor went to Other with 24% of the vote. 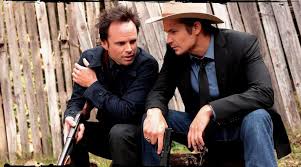 Everyone has heard of a justified shooting, right?  Well, justified shootings are Deputy U.S. Marshal Raylan Givens’ forte.  Despite being a loose cannon himself, Raylan appears quite normal when compared to his Kentucky kin.  Entangled with really BAD criminals, Harlan County relies on Raylan as does the Marshal Service, his ex-wife, his ex-girlfriend, and his con-ex-best friend, Boyd Crowder.

Reader’s Choice: NCIS.  Last year, NCIS’s sister program (NCIS: LA) made our Pick Per Night blog post, but this year 29% of our readers chose NCIS as the favorite.  Our Tele-Tuesday pick, Justified, came in second with 19% of the vote.

Revenge follows Amanda Clarke/Emily Thorne, a young and beautiful addition to the rich and prestigious Hamptons.   However, Emily’s arrival isn’t her first trip to the neighborhood… when she was a little girl, Emily (then known as Amanda) and her father lived in the quaint beach house next door to her father’s boss and his mansion.  Late one night, Amanda’s father was ripped away from her for crimes that later sent him to prison for the rest of his life.

Not necessarily believing in his innocence, Amanda rebelled and spent time incarcerated herself.  The day Amanda was released from prison, she was greeted by a stranger with life changing news: her father was dead, he had been framed, and she was now filthy rich.

Amanda assumes a new identity as Emily Thorne and sets her plan in motion vowing revenge against those responsible – primarily the Grayson family. Each week, Emily destroys someone involved with her father’s demise.

Does it get much sweeter than Revenge?

Reader’s Choice: Criminal Minds.  Last year we would have agreed with the 25% of readers who feel that Criminal Minds is the best show on Wednesday nights.  But that was before the second place winner (Revenge at 22%) hit the airwaves…

What makes The Vampire Diaries so successful?  For one, the allure of the vampire will always seduce a television audience.  Secondly, production cast perhaps the most beautiful ensemble on TV.  And, most importantly, the writing is absolutely stellar.

The first season focuses on the history of vampires and witches in Mystic Falls.  Season two continues with the Katherine/doppelganger storyline and also introduces the werewolf curse.  The suspense, sexual tension, and the twists and turns involving every character are perhaps some of the best on television.  We’re smack dab in the middle of season three now, watching as a resurrected witch decides the fate of her family of vampires and we can’t wait to see what the writers have in store for us!

Reader’s Choice: Bones.  Bones is a Tele-Tuesday favorite around here, and came in first place on Thursday night’s with 18% of the vote.  The Vampire Diaries and Person of Interest tied for second place with 16% each. Brothers Sam & Dean Winchester hunt – not the usual game like ducks and deer – but to save the world from demons, vampires, shape-shifters, the Apocalypse, the leviathan, the devil, the mother of all evil, etc…

Sam and Dean are bad boys: Sam has been possessed by the devil and has enjoyed demon’s blood as a power source; Dean drinks (alcohol) heavily and he is promiscuous.  Both brothers are on the FBI’s most wanted list (it has nothing to do with their impersonating an officer repeatedly, and the trunk of their car resembles an arsenal of men at war.  Why?  Because they are at war – a war of hunting and killing the supernatural evils plaguing the world today.

Did I mention the music?  The music definitely deserves a best supporting character nod at some point…  “Carry on my wayward son.”

Reader’s Choice: Other.  Friday night is a big night on television, yet Other still won with 22% of the readers’ votes.  Grimm tied with Supernatural for second place with 19% each.

The Firm television series picks up ten years after Mitch McDeere turns in his law firm’s documents to the FBI, proving they were overbilling clients (the plot from the novel and the movie).  The story continues as these said documents lead the FBI to take over the law firm and uncover piles of other files incriminating the mob, who has in turn set their sights on Mitch and his family as retribution.

The minor:  Mitch will represent a new individual case each week, like when he takes on a dirty judge.

The ongoing:  The mafia will follow and chase after Mitch and his family for his actions in Memphis (fallout from the movie plot).

The major:  Mitch will continue to research the Sarah Holt case – a client on trial for murdering an older woman while in her care.  This story qualifies as the major plot line because unbeknownst to Mitch, his new firm is interested in THIS case.  The firm isn’t interested in Miss Holt, the woman Mitch represents; they are interested in protecting their client – Noble Insurance.

Reader’s Choice: Other.  There’s not much to choose from on Saturday nights, and Other won outright with 75%.  The Firm came in second with 25%.

The supernatural element is taking over the television world today, and AMC joins this phenomenon by telling the story of a small group of people working feverishly to survive a widespread zombie epidemic in the great state of Georgia in The Walking Dead.  The series begins with small town sheriff Rick Grimes waking from a coma to discover he is alone in every sense of the word: the hospital is desolate, the town looks like a post-apocalyptic war zone, and his family has vanished.

And most importantly, not every character is safe from the walkers…

Reader’s Choice: Other.  Yes, with all of our options on Sunday nights, 25% of our readers voted on Other.  The Walking Dead came in second at 22%.

Did your favorite win?  If not, what is it and tell us why it should have?  I’d love to hear from you!

Many noticed that our poll last week only consisted of dramas.  In a few weeks (next week we’re going to introduce a few new shows coming in April), we will poll which comedies reign supreme today.  Which major network will have the most watched sitcoms?  Which sitcom will come out on top?  We hope to see you then…