It’s that time of year again!  The fall television schedule is right around the corner, and as always, the networks have a lineup of many new programs to accompany our returning favorites.

Matthew Perry returns to NBC in the new comedy, Go On.  While NBC has aired the pilot episode a few times already, I have yet to catch it.  But I won’t miss it this week—my DVR is already set.

But for those who haven’t heard anything about it, Mr. Perry plays Ryan, a sports radio host who is ordered into mandatory counseling before he is allowed to return to work after his wife passes away.  His therapy group consists of all the colorful characters one would expect to see—people Ryan feels need counseling more than he does.

The series also stars Julie White (the hilarious Mrs. Witwicky from the Transformer movies), John Cho (Harold from the Harold & Kumar movies), and Brett Gelman (from the Funny or Die series), as well as a few other familiar faces (Allison Miller from Terra Nova, Laura Benanti from the short-lived Playboy Club, and Khary Payton from General Hospital).

A few weeks ago, Amber West reviewed the pilot on her Why It’s Worth a Watch Wednesday post.  Her take on the new comedy told me exactly what I thought it would—Matthew Perry is funny and the show has potential. The New Normal stars Andrew Rannells (from Broadway’s Book of Mormon) and Justin Bartha (from The Hangover movies) as a gay couple wanting to add a precious baby to their family.  When they meet a single mother (Goldie, played Georgia King), the couple decides they have found the perfect surrogate for their baby.

One of the things I’m most looking forward to is the return of Ellen Barkin.  From the promos I’ve seen, Barkin’s character is a bit off-colored and I can’t help but laugh—even if it’s an uncomfortable laugh.  Will The New Normal bring a bit of raunchy comedy to NBC?  I guess we’ll just have to wait and see…

The other thing I’m most looking forward to is the fact that Ryan Murphy co-created the series.  Murphy’s most popular television series include two Ooo Factor favorites: Nip/Tuck and American Horror Story.  I think his resume alone speaks volumes and we should all at least check out the pilot episode…

The sitcom also stars NeNe Leakes; that’s right, a “Real Housewife” from Atlanta and previous Celebrity Apprentice contestant.  Now isn’t that interesting?  I don’t watch any of the Real Housewives, but I do know of NeNe from all of her coverage in the media.  Maybe she’ll bring some of her NeNe flare to the show?

The New Normal premieres tonight, September 11th, after Go On on NBC. 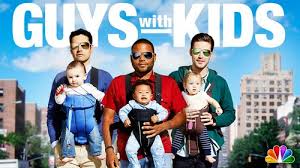 It seems that the parents with babies theme is big over at NBC… last year, Up All Night premiered and scored a second season pick up, and this year Guys with Kids is the second sitcom based on fathers and their babies (the first being The New Normal from above).

Guys with Kids follows three fathers as they raise their children.  I’d say “stay-at-home-dads” or “Mr. Moms,” but having not seen an episode yet, I’m not sure of their individual situations.  One is believed to be divorced and another married, but we’ll just have to wait and see.

Regardless, the new comedy stars three funny men with impressive resumes: Anthony Anderson (from The Bernie Mac Show and Law & Order), Zach Cregger (from the short-lived sitcom Friends with Benefits), and Jesse Bradford (from the very funny I Hope They Serve Beer in Hell and TV’s short-lived Jimmy Smits drama, Outlaw).  And speaking of funny men, the SNL great and current nighttime TV host, Jimmy Fallon co-created the series.  Again, the talent involved makes the new show worth a watch…

But it’s not all about the boys; this sitcom also stars a few women, including Jamie Lynn Sigler (The Sopranos) and Tempestt Bledsoe (The Cosby Show).  I personally can’t wait to see Meadow Soprano in a comedic role…

Guys with Kids premieres this Wednesday (September 12th) on NBC.

If I had to rank these in order as to which one I’m most looking forward to, I’d put Go On at number one with Guys with Kids following closely behind at number two.   No offense to The New Normal; someone always has to come in last, but that doesn’t mean we won’t give it a chance.

What do you think?  Will you tune in to watch any of the new comedies on NBC this year?  Which of these shows will make it and which ones won’t… and why?  I’d love to hear from you!