Fall Television is officially here!  To celebrate, Amber West and I tuned in and watched two brand new ABC shows this week for our Why It’s Worth a Watch Wednesday reviews—Last Resort and 666 Park Avenue. 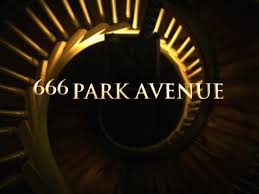 “What would you do to have everything you desire?”

Residents at The Drake apartment building in New York City have it all—wealth, success, and good fortune.  But in this building, all good things come at a price.  At 999 Park Avenue (the actual building’s address in the television series), a supernatural force demands possession of its residents’ souls in return.  So, be careful what you wish for tenants!

Based on the books by Gabriella Pierce, 666 Park Avenue stars Terry O’Quinn (Lost) as Gavin Doran, The Drake’s owner.  Gavin is clearly the direct source to the evil inside the building; without saying he’s the devil, he’s definitely the medium between the tenants and their “deals.”  If someone hopes for or wishes for something to Gavin, he can make it happen—kind of like making a deal with the devil.  Vanessa Williams (Desperate Housewives) plays Olivia, Gavin’s beautiful wife.  While we don’t know much about her yet, Olivia also seems to know the building’s and Gavin’s secrets.

New to The Drake are Jane (Rachael Taylor, the beautiful Australian actress from movies such as Transformers and Shutter) and her live-in boyfriend Henry (Dave Annable from Brothers & Sisters).   The young couple takes the position as the apartment building’s new managers, but since Henry has a “real” job with the mayor’s office, Jane does most of the work around The Drake.  Now, Gavin has already stated his intentions for Jane to his wife—he will use Jane to get to Henry, whatever that means.  From the early stages, it looks like this “using” will consist of allowing Jane to “see” things around The Drake… by way of hauntings and visions.

Jane and Henry immediately meet Brian Leonard (Robert Buckley from One Tree Hill) and his wife Louise (Mercedes Masohn from The Finder), a few of The Drake’s tenants.  Brian is a struggling playwright and his wife is a recently successful photographer… and while we’re not quite sure if the Leonards have made a deal with Gavin or not, we do see the building take action against Louise in episode two AND it’s clear from the beginning that Brian is falling victim to the evil ways of seduction… but I don’t want to give too much away for those who haven’t seen it yet.

They also meet Nona (Samantha Logan), the youngest tenant at The Drake (that we know of).   Nona has a special gift—not only does she know everything that’s going on at the apartment building, she can also see into the future by possessing others’ precious keepsakes.  Nona warned Jane about the thief inside the building; but, little does Jane know that the thief herself is the one who told her all about the robberies.

Anyway, The Drake is a large building and there have been other tenants introduced as well; however, I’m quite certain some will never be heard from or seen again…

Now, I watch a lot of television; therefore, in order for a new series to really grab me, I pay attention to more than just the actors and story.  I’ll admit, the words used to describe 666 Park Avenue interested me before I even watched the pilot episode—words like sexy, mysterious, and chilling.  But, I was still looking for more…

The first thing that grabbed me was the dialogue.  I personally love rich dialogue, but I particularly enjoy dialogue when used as an element of foreshadowing…

“The essential truth to who we are—we all want something.”  Gavin
“This place will keep you on your toes.”  Nona
“With ambition, there is risk.” Gavin
“You shouldn’t have come here.  They’re never going to let you go.”  Mrs. Barlow

Another aspect that hooked me is the—wait for it—elements of horror.  For the loyal readers of The Ooo Factor, you know that I love the horror genre, whether it is slashers or thrillers.  666 Park Avenue has just the right combination of both.  It has a supernatural component with the occasional appearance of ghosts, or the mysterious opening and closing of curtains, but it also has a spooky and psychological thrill feel to it.  Vanessa Williams mentioned in a TV interview that I saw that horror lovers would appreciate the collection of horror themes used in the new series.  So far, we’ve already witnessed the writers pay homage to one of the greatest horror writers of our time—Alfred Hitchcock—with the use of the “birds” and the Tippi Hedren reference in the dialogue.  Here’s to hoping there will be more…

Usually when I review a new television program, I can’t help but award it with the SSTV rating; but I’m breaking away from the norm today.  That’s right—I’m awarding 666 Park Avenue with the MacTV rating!  Turn off the lights, light a candle, and curl up on the sofa with a steaming bowl of Shells-N-Cheese and a glass of red wine as you watch the mystery at 999 Park Avenue unfold…

I really hope I’m not jumping the gun with this one… 666 Park Avenue is my cup of tea—heck, it might just be my new American Horror Story.

Now click over to Amber’s blog and see what she thinks about ABC’s Last Resort.  I don’t know about anyone else, but I’m a HUGE Andre Braugher fan!

Come back next week when Amber and I review something… probably something new!