It’s time again for Catie Rhodes and I to break down another cinematic original and its remake.  Sticking with our usual ways, Catie reviews the original and I take on the remake.  This month we tackle the action film, The Mechanic. 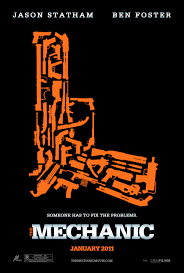 First, let’s check in with Catie’s Homemade Summary that applies to both the 1972 and 2011 versions:

A hit man befriends the son of one of his victims and begins to train him in the business.  Will the student outsmart the teacher?

Before I begin, let me just say why I requested the remake.  Regardless of how ashamed I am to admit it, I usually choose the newer versions because I have not seen the originals.  And while I indeed haven’t seen this 1972 movie, that is not why I picked the 2011 film this time.  Heck, I even had Bronson’s Mechanic on my DVR for a few weeks while I waited for Catie to decide which one she would cover.  But, because she is an extremely nice person, she let me take the remake.  Why did I request the more recent of the two?  Two words—Jason Statham.

For those who have friended me or follow me on Facebook, they know that I like to get in my monthly dose of the British actor.  Like most girls, I’m not limited to just the one, but he is my current crush and has been for a few years.  Luckily for me, I have the best guy in the world.  He understands my obsession with Jason and he usually goes upstairs to play video games so that I can watch my next Jason movie.  Two months ago, it was the British crime drama Blitz.  Last month, it was his most recent release Safe.  Last night, it was the 2011 version of The Mechanic—for like the fourth or fifth time.  Maybe it’s Jason’s constant five o’clock shadow; maybe it’s his serious facial expressions with the occasional smile; maybe it’s his sexy, sexy voice; maybe it’s his sculpted body; maybe it’s his ability to fight with some of the best; or maybe it’s all of the above.  Bottom line, Catie granted me this opportunity and I thank her for my monthly Jason fix.

Now, to the 2011 adaptation of The Mechanic…

As a part of our original versus remake series, I like to compare the similarities between the two films.  And considering the 2011 motion picture was the idea of two of the original producers from the 1972 version (Irwin Winkler and Robert Chartoff), the two movies are very similar.  Very.

Jason Statham plays Arthur Bishop, a mechanic.  By definition, a mechanic is a hit man or assassin with a strict code and unique ability to eliminate the targets.   According to Bishop, there are three types of hits: 1) the hits that make it look like an accident; 2) the hits that cast suspicion onto someone else; and 3) the hits that send a clear message.

“The best jobs are the ones nobody ever knows you were there.”  That’s Bishop.

Bishop receives these “assignments,” from “the company” led by Dean Sanderson (Tony Goldwyn), and no one is better than Bishop.  His skills are so refined, there’s no assignment he won’t complete successfully—even when tasked with killing his mentor and friend.

Side bar: ever since the movie Ghost, when I see Tony Goldwyn, I know he’s a scum bag.  Am I the only one?

Back to the movie…

Catie mentioned that her Bishop led a lonely life.  So does my Bishop.  He lives alone in a lavish lake house; he has a recurring “relationship” with a New Orleans prostitute; and he appears to only have one “friend” (Harry McKenna, played by Donald Sutherland).  But that’s not to say he doesn’t have love in his life; he does—his vinyl records and his 1966 Jaguar E—he treats both with love and finesse.

Bishop’s strict code includes: “It’s stupid to kill someone when you have a motive.” and “Revenge is an emotion that can get you killed.”  But what about guilt?

For what seems to be out of guilt, Bishop decides to mentor his friend’s son (Steve McKenna, played by Ben Foster).  In his father’s words, Steve is a screw-up; yet oddly enough, his father had still confided in Steve what Bishop does for a living.  Steve is anxious to join Bishop and train to be a mechanic, perhaps too anxious.  On his first solo assignment, Steve ignores all of Bishop’s instructions and messes up the job.  He gets it done, but it’s not clean.

“The company” is not pleased with Bishop’s bringing in an outsider, even when Bishop makes a good point—anyone trained by him would be valuable for them.  But will this training come back to bite Bishop?

As with every good movie, there is one particular part that defines the story—the one particular part that grabs the viewer and makes them say, “uh-oh.”  In The Mechanic, this moment comes the second Bishop learns “the company” has deceived him.  Why in the world would anyone cross who they consider to be the best hit man in the business?  When Steve learns “the company” lied to him about the “why” behind an assignment, he takes matters into his own hands.  Two words can describe the action going forward in this film—Game On.

As with any good Statham movie, we get to watch him single-handedly fight his way out of situations where he is completely outnumbered by men and weapons.  But Ben Foster is no slouch.  When I first watched The Mechanic, I didn’t know Mr. Foster.  At one point, I even thought that maybe Statham’s co-star was Ryan Gosling.  I was disappointed when I realized it wasn’t Mr. Gosling, but in this role, Mr. Foster holds his own.

So, is The Mechanic (2011) worthy of watch?  Yes; but, if anyone is still uncertain, answer these questions: Do you like action movies?  Did you like the original 1972 film?  Do you enjoy Jason Statham?  Did you like The Transporter movies?  Do you like to watch Tony Goldwyn get his?  If anyone answered “yes” to the above questions, this remake is a safe bet.

What do you think?  Have you seen either the original or the remake of The Mechanic?  If you’ve seen both, which do you prefer and why?  If you haven’t, do you want to?  I’d love to hear from you!

8 Replies to “Friday FabOoolousness – The Best “Mechanic” in the Business”