Fall Television is officially here!  With all of the new TV programs airing this fall, Amber West and I have a ton of homework to do…  This week, we tuned in and watched two of the CW’s newest dramas for our Why It’s Worth a Watch Wednesday reviews—Beauty and the Beast and Arrow. 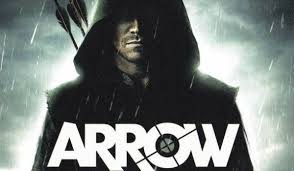 Following an accident at sea, Oliver Queen was presumed dead.  After being discovered alive on an island five years later, Oliver finally returns home… but the accident changed him.  While his closest friends and family welcome him back with open arms, Oliver wants more—he needs more—so he decides to reconcile his past, starting with his ex-girlfriend (Laurel Lance, played by Catie Cassidy from Harper’s Island and the short-lived reboot of Melrose Place).  But he doesn’t stop there; Oliver also wants to restore his city from the “ills of society.”

Before Oliver and his father set out to sea, the young Queen thought it somehow appropriate to invite his girlfriend Laurel’s sister along with him for a getaway.  Not only did Oliver not care that he was cheating in the worst possible way, he watched Laurel’s sister wash away with the yacht.  Once inside the lifeboat with his father, the elder Queen made some confessions to his son, revealing that he wasn’t the man Oliver thought he was.  Along with a list of other men, Oliver’s father purposely destroyed their city for one reason—greed.  Oliver’s father begged him to make things right on his behalf before taking his own life; and with that, Oliver’s new persona was born—a green-hoodie-wearing vigilante, Arrow.

Of course, I’m not quite sure how Oliver went from a spoiled, rich boy to the crime fighting stud that he is today…  I have many questions about his five years on that island.  Not only can he leap like Spiderman without the web from spot to spot, but he also has mad bow and arrow skills.  But at least we do know how he keeps up that beautiful physique, and ladies this one is for you—the way he moves up that ladder by only hanging onto that metal bar as he swings his body up rung by rung… oh, my!

The series also stars many familiar faces: Paul Blackthorne (The Dresden Files and The River) as Detective Quentin Lance, Laurel’s father—needless to say, he’s quite angry with Oliver for taking his other daughter out to sea with him which ultimately led to her death;  David Ramsey (Dexter) as John Diggle, Oliver’s driver and bodyguard—this guy is fun—he’s almost as stealthy as Oliver; Willa Holland (the O.C.) as Thea, Oliver’s sister—this poor girl has issues; losing her father and her brother in the boating accident led to her snorting and swallowing anything that can help take the edge off; Colin Donnell (Pan Am) as Tommy, Oliver’s best friend—my guy is convinced Tommy is going to be a bad guy… me not so much, but I guess we’ll see; Susanna Thompson (Once and Again) as Moira, Oliver’s mother—just remember, things aren’t always as they seem…; and Jamey Sheridan (Law & Order: Criminal Intent) as Robert, Oliver’s father.

Usually when I review a new television program, I can’t help but award it with the SSTV rating; but I’m breaking away from the norm today!  That’s right—I’m awarding Arrow with the JFTV rating!  Like the Lay’s potato chip slogan, “Betcha can’t eat just one,” Arrow piqued my interest just enough to make me bite again.  It may not be the best new show airing today, but it has sucked me in.  Here’s to hoping it doesn’t disappoint and get downgraded deeper into the season… because for now, it definitely tastes good.

Now click over to Amber’s new & improved blog and see what she thinks about Beauty and the Beast.  I like it, but does she?

Come back next week when Amber and I return with a few of television’s most recent comedies, NBC’s Guys with Kids and ABC’s The Neighbors.