This past Friday, NBC aired a Mockingbird Lane Halloween special…

What is Mockingbird Lane?  Does this ring any bells?

That’s right!  NBC put together an all-star cast in a reboot of the 1960s classic The Munsters.  I’ve been waiting on the promotions for this show since Jerry O’Connell first announced his new role as Herman Munster on Live with Kelly.  I’ve been waiting, and waiting, and finally saw the first trailer for the Halloween special earlier this month.

Halloween special?  What happened to Mockingbird Lane being a new series?

Unfortunately, and not really all that surprising, the network swooped in and dropped on ax on the ten million dollar project before it aired one single episode.  However, in a move unlike most networks that have just killed an expensive project before even allowing the public to chime in by watching, NBC decided to air one episode Friday, October 26th before the Halloween episode of Grimm.  Rumors swirled after the announcement, speculating that the special’s ratings would determine whether or not the network gives Mockingbird Lane another chance at a weekly series in 2013.  Like most rumors, we’ll all just have to wait and see…

Regardless, this news crushed me; but, at least the network gave the reboot a chance.  While I’m not sure what kind of numbers NBC was hoping for, it has been reported that Mockingbird Lane pulled in 5.4 million viewers on Friday night.  This number is just barely shy of the channel’s hit Friday night fairy tale drama, Grimm. 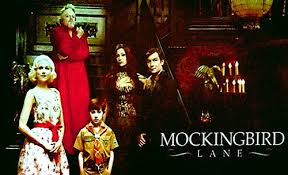 First, let’s clarify that this rendition of The Munsters is not a situational comedy—it is a drama with comedic elements—a dramedy, if you will.

Now that we’ve cleared that up,  let’s meet the Munsters: Grandpa, or “D” (short for Dracula), played by Eddie Izzard, the over-bearing grandparent who sees nothing wrong with his family heritage; Herman, played by Jerry O’Connell, a former human created into a “munster” by Grandpa; Lily, played by Portia de Rossi DeGeneres, the family matriarch and vampire (but we’ll talk more about this shortly);  Marilyn, played by Charity Wakefield, the “normal” Munster, as in human; and Eddie, played by Mason Cook, the wanna be normal adolescent boy who learns he’s not so normal… he’s a werewolf.

These Munsters are not quite the same as the ‘60s family…

Instead of being sarcastic and goofy, Grandpa comes across as very blunt (although humans think he’s joking) and serious.  While he does have a laboratory underneath the staircase, viewers don’t really see the “fun” side of Grandpa as he cooks up his spells that we loved in the old series.  Like most vampires, Grandpa has a fixation on feeding and making humans his toys in this one-hour special.  To Grandpa, humans serve one purpose—they are a food source for his family and a salvage yard for Herman… and he makes no apologies for this.

Instead of being a childish buffoon with extreme strength, today’s Herman is very parental, loving, and gentle.  This Grandpa-made Frankenstein monster does not have the classic Herman bolts in his neck, but instead has visual reminders of his surgical transformations with scars and zippers all over his neck, chest, and arms (loved the Herman introduction though, with Jerry O’Connell standing in front of a lamp post with the fixture creating a silhouette of the Herman bolts—nice touch).  Unfortunately for this Herman, he “loves too hard,” showcased by his need for a new “ticker,” or heart.

Instead of donning the classic white streak through her hair, Mockingbird Lane’s Lily has beautiful, one-toned brown hair (or maybe it’s black; I watched it without my contacts in).  She shows no signs of being fiery… and her vampirism is not mentioned once.  Actually, if one didn’t know any better, one might assume this Lily was also a werewolf like her son—she even mentions at one point that she’ll be careful not to hurt any humans in twenty-nine days, or at the next full moon.  I know Lily is supposed to be a vampire, but I feel the series could have focused less on her special effects (bugs dressing her and smoke enveloping her as she moved) and more on her character.

But, unlike the differences in Grandpa, Herman, and Lily, the remaining two Munsters were very close to their counterparts—Marilyn and Eddie…

Marilyn is human… a gorgeous, blonde human who has recently enrolled in community college.  While she is not a monster, she loves her family all the same and understands their lifestyle and needs.  Eddie wants nothing more than to be like his cousin Marilyn—a human; but, he’s not…he’s a werewolf.  He insists on being a vegetarian and refuses to eat meat, so his parents bring home a dragon to help Eddie control his urges.  Yes, a dragon instead of the usual family pet dog.

Despite the differences between the original and rebooted characters, I did enjoy the one-hour Halloween special.  The visual effects were amazing, especially for television.  The story was a creative twist on the original; after all, it was a Bryan Fuller development… remember Pushing Daisies?

However, the special one-hour program lacked a bit for me.  Perhaps it’s because what we saw Friday night was supposed to be the pilot episode for a returning program and NOT a one-hour Halloween special.  To me, a special should start cleanly, which Mockingbird Lane did with the character introductions and explanation for the family’s moving.  A one-hour special should also wrap up nicely, which Mockingbird Lane did as well.  But here’s what it was missing… the middle.  A special’s body should follow a complete cycle of particular storyline in-between the opening and closing.  In my opinion, the story of Herman and Lily telling Eddie he was a werewolf was just too choppy and forced to wrap early.

Trust me; I wanted to LOVE Mockingbird Lane… and I’m still not opposed to the series returning on a weekly basis.  But, if the rumors were true and the ratings were high enough, I expect more from the subsequent episodes.

11 Replies to “Tele-Tuesday: A Halloween Special – Growing Up a Munster”