Like most of the other writers I adore today, I first met Claudia Lefeve on social media last year.  Whoever says social medial is a waste of time, obviously hasn’t been hanging in the right hashtags and groups…

Claudia and I hit it off immediately!  Not only do we have writing in common, but we’re also both Texas girls, love football, enjoy the same television shows, and have crushes on some of the same TV stars.  Speaking of those crushes… our men even have the same belt buckle, an idea Claudia and I both borrowed from Fox’s Bones.

Born and raised in the Gulf Coast border town of Brownsville, Texas, Claudia noticed her hometown was a very curious place where folks see curanderas in lieu of shrinks, tortillas are served at every meal, and even gringos speak Spanish.  She currently resides in Northern Virginia with her husband and precocious pug.

Before we jump right into the interview, check out these blurbs from Parallel, Paradox, and Paradigm, the three YA fantasy books in Claudia’s Traveler Series.

Destiny has a way of catching up.

Saddled with powers she doesn’t understand, Etta Fleming’s world is turned upside-down the day she meets Cooper Everett, the man who transports her to an alternate reality. A reality she was meant to be a part of. One minute, she’s an orphan living at Dominion House for Girls, an institution for delinquent foster kids, then finds herself attending the exclusive Dominion Hall Academy.

Plucked from the only world she’s ever known, Etta now has to deal with an aunt she never knew, a boyfriend she doesn’t know, and a best friend who can’t know.

Etta is slowly readjusting to life in her new reality, while still recovering from the shock over the news regarding her relationship with Cooper.

While learning more about her role as leader of the Council, she soon discovers that her future is linked to the five extraordinary individuals she must recruit in order to ensure her destiny.

Nothing is as it seems, as rivals become allies and friends become the enemy.

Take hold of your destiny.

Etta Fleming doesn’t know she was meant to return to her true reality four years ago. After years of being the “orphan girl” in the alternate world she grew up in, she’s finally carved a niche for herself with a great job, a steady boyfriend, and a best friend by her side.

Undeterred by the shift in the timeline, it is up to Cooper Everett and his friends to convince Etta that she is still destined to become their leader, fighting against their post-apocalyptic future.

Will meeting the ghosts of her past convince Etta that she’s part of a grander destiny? Or will her past, present, and future worlds collide?

When you were a little girl, did you dream of one day writing a bestseller, or did you have something else in mind?

Never in my wildest dreams did I ever think I’d be a writer! Even as a child, I always pictured myself as an attorney (I would doodle names of law schools on my notebooks)! Now, I write full-time and teach criminal justice at the local community college on the side. I do, however, daydream about one day being like Joan Wilder in Romancing the Stone and being recognized by a Columbian drug lord as I traipse around Columbia with Michael Douglas! How cool would that be?

Who are a few of your favorite authors?

Where do you find the inspiration for your stories?

I take my cue from stories that haven’t been told yet. I read a lot of books, and I love them all, but I wanted to write stories I hadn’t read yet. For my Travelers Series, I’d always been fascinated by alternate realities, so I went with that idea and ran with it.

The cover art for your books is beautiful.  Did you design them yourself?

There’s no way I could design the wonderful covers for my Travelers Series. Robin Ludwig Design deserves all the credit! I do, however, do a few of my covers (short stories, novelettes, etc.), but I leave the rest to the professionals!

Many writers imagine a celebrity or familiar face when developing their characters.  Did you have anyone particular in mind when writing your protagonist Etta Fleming and why?

Normally, when I read, I can always picture a particular actress. With Etta, I kind of draw a blank. But if I had to choose, she’d look a lot like Jennifer Lawrence (Hunger Games), but with darker hair.

Speaking of celebrities, who are you thinking of at this very moment?

How do you research for your books?

I had to read several physics books in order to somewhat explain the theories pertaining to parallel universes and time-travel. I also picked my father’s brain, as he teaches high school physics. But the fun of writing speculative fiction is the “what if?” component…I don’t have to do a whole lot of research!

Besides writing, I’ve noticed you’re infatuated with skulls.  How did this come about?

To be honest, I have no idea! But a lot of it has to do with my heritage. Growing up in South Texas (on the Mexican border), you kind of develop a morbid fascination with death and skulls. In fact, I named my book imprint, Sugar Skull Books, in honor of Day of the Dead. And for my birthday last week, my husband’s aunt made me the most fabulous Day of the Dead purse…looks like Vera Bradley, but with skulls!

What other hobbies do you enjoy?

The hubby and I are big into camping, so we try to go whenever we can. And I’m a tv-holic (see response below).

I wouldn’t be myself without asking about television –what are your four favorite television programs airing today?

Let’s go to the movies now… what is your favorite movie of all-time?

That’s an easy one. Sixteen Candles. I can watch it all day, every day. When I got married, I even inscribed a quote from the movie on my hubby’s wedding band! 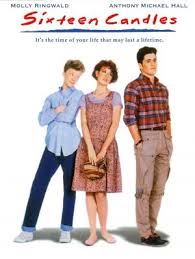 You had your husband’s wedding band engraved with a line from Sixteen Candles?  Please share…

::laughs::  The inside of my hubby’s wedding band says, “Married? Yeah, Married!”

What snacks do you order when at a movie theater?

Popcorn and Kit-Kats (and if there are no Kit-Kats, then M&M’s). I like to eat them together and pretend it’s chocolate covered popcorn!

Before we go, I’ve decided to throw in a completely random question… saying you’re infatuated with skulls made me think immediately of the movie Skulls with our Fringe hunk Joshua Jackson.  Have you seen it?  Do you believe in the secret societies as depicted in this movie?  Why or why not?

Joshua Jackson (yum). I totally believe there are secret societies hidden among universities, although I’m not sure if there are any truly completely secret. I mean, we know the names of many of them (i.e. Skull and Bones, Gridiron Secret Society, Cadaver Society, etc.), but its membership list is usually kept a secret. As for me, I’m a member of the first secret society for women!

Do you have a question for Claudia?  Have you read any of the books in the Traveler Series?  If so, share your thoughts here!  We’d love to hear from you!

AND, because Claudia is such a fabOoolous person, she’d like to offer a giveaway to one lucky commenter…

The first person who can correctly comment with the name of the society/sorority that Claudia is a member of wins an e-book copy of all three books in the Travelers Series!