Fall Television is officially here!  With all of the new TV programs airing this fall, Amber West and I have a ton of homework to do…  This week, we decided to break the mold and do something we’ve never done before—review the same show!  Will Amber and I agree or disagree after watching NBC’s Chicago Fire? 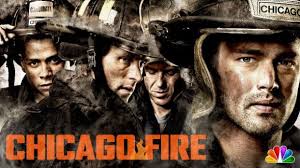 There’s just something about firefighters… they’re sexy, courageous, generous, and did I mention sexy?  But seriously, can you imagine the pressure our firefighters are under on a daily basis?  Saving lives; risking their lives; protecting everyone, including one another, at all costs; living with some of the highest levels of stress imaginable—they really are heroes.

Created by Dick Wolf (creator of all the Law & Order series), Chicago Fire follows a group of firefighters and paramedics as they serve Chicago and work to maintain and balance their personal lives.  And, as if the job isn’t tough enough, the new drama starts off with these brave men and women losing one of their own.

Now, we all know that every fire starts with an ignition source; and with Chicago Fire, that source would be the sexiness.  Just look at this cast: Jesse Spencer (House) as Lt. Matthew Casey; Taylor Kinney (The Vampire Diaries) as Lt. Kelly Severide;  Eamonn Walker (Oz) as Chief Wallace Boden; Charlie Barnett (Men in Black 3) as Firefighter Peter Mills; and Lauren German (Happy Town and Hawaii Five-0) as Paramedic Leslie Shay.  The series also stars David Eigenberg (Sex and the City) as Firefighter Christopher Herrmann and a few ladies I’m not familiar with (Monica Raymund and Teri Reeves).  Plus, for those Fairly Legal fans (may the show rest in peace), it has been announced that Sarah Shahi will join the cast in the upcoming episodes…

But, is all of this eye candy enough to keep us coming back for more?

If this new series is anything, it is dramatic.  We watch the firefighters and paramedics deal with addiction, guilt, blame, stress, heartbreak, and injuries.  Every week, the brave men and women rush out to all sorts of emergencies—fires, wrecks, and other life-threatening situations.  By definition, this makes Chicago Fire a procedural drama.  However, the series also has ongoing storylines from week to week, making it a serial as well.  Being that we’re only one month in, I’m not certain how difficult it will be to follow the series if missing an episode… but, I don’t think it will be all that hard to pick right back up where we left off if we do indeed skip a week.

I chatted with a volunteer firefighter about NBC’s new program, and let’s just say he’s not so thrilled with the end result.  He mentioned that the cast and crew spent months following an actual Fire Department (if I remember correctly, I think he even said a Chicago Fire Department), and from what he could tell, the creators took certain liberties with how real firefighters do their job.  Sadly, he said firefighters never undress and strip down to a bare chest in the street after battling a fire.  I say sadly because I know many of us women wouldn’t mind seeing this happen, and thankfully the creators give us this tiny gift on the television screen.

Heehee.  Sorry, back to being serious…

My fire fighting friend also stated that paramedics never ask anyone involved in a horrible crash to turn their necks, especially not a small child.  He added that the fireman do not use their radio system to talk trash or do anything else that’s unprofessional over the air waves.  All of this may not be true of every single fire house in the world, but these were his thoughts on the program, and he wished the writers would make it a bit more realistic while still making it interesting for the television audience.

All of this said, I realize Chicago Fire is a fictional television program.  I did not let any of the inconsistencies with what firefighters and paramedics actually do sway me away from watching.  But, having watched all four episodes to date, I’m still uncertain of how I feel.  I like Dick Wolf.  I like a few of the actors, particularly Jesse Spencer, Taylor Kinney, and Lauren German.  I like the fresh idea of a series with firefighters and paramedics when most of today’s TV centers around police procedurals, the supernatural, and sitcoms.  But, can I award the drama with anything other than the SSTV rating at this time?  No.  I can’t.  And, if anyone wants to “make” me, I’d downgrade it at this very moment to an NIV rating… and I don’t want to do that—not yet anyway.

What do you think?  Have you watched Chicago Fire?  Have you seen anything in the series and asked, “Would that really happen in real life?”  If so, do the writers’ liberties bother you enough to stop watching?   I’d love to hear from you!

Now click over to Amber’s new & improved blog and see what she thinks about the new NBC fire drama.  Did we agree or disagree?  Trust me; we usually have very different tastes when it comes to our favorite television shows…

Come back next week when Amber and I review something… we’re thinking about changing things up again and trying something else that we’ve never done before.  Stay tuned!

13 Replies to “Why It’s Worth a Watch Wednesday – Is Chicago Fire Red Hot?”