I talk a lot of television here on Tele-Tuesday, mainly because I watch a lot of TV… but I’ve never mentioned any of the daytime programs that I enjoy.  For longer than I can remember, I’ve watched Live with Regis and Kelly (which is now Live with Kelly and Michael).  For at least the past decade or so, I have also caught The View.  Dating back to when I was a little, little girl, I’ve stayed up-to-date with a few of my favorite soap operas, mainly General Hospital.

But only recently have I started watching The Ellen DeGeneres Show.  It’s not that I didn’t watch previously because I didn’t like Ellen DeGeneres, it’s because I worked an 8-5 job and felt I already recorded enough talk-show TV.  However, now I stay home, and one day I caught The Ellen Show… and enjoyed the heck out of it.  So, I made it a point to watch the next day.  And the next.  And the next.  And, before I knew it, I had another daytime talk show set to record every single day.

My guy even accused me of having a TV-crush on Ellen because I couldn’t stop talking about what she had said or what she had done on her show each day when he got home from work.  So, maybe I do?  Why not?  She’s funny, entertaining, and extremely giving.  Her generosity has made me cry on multiple occasions.  AND, she brought Sophia Grace and Rosie into my life.

Now that my mom is in retirement, I asked her to make a point to catch an episode of Ellen.  She found it difficult, considering my dad is home with her most days and he feels she already watches enough talk shows, so I conveniently played a taped episode one afternoon when they were visiting.  And, guess what?  Both she AND my father said Ellen might just have the best daytime/talk television show on the air today… and now they watch every day.

Ellen gives some of the best interviews, plays some of the most entertaining games, pranks some of the biggest celebrities, and her generosity extends beyond belief.  She helps families in need, provides support for schools and children, and she has a big heart for all animals.

Her generosity doesn’t stop there…  Now, Ellen isn’t Oprah.  She doesn’t give things away to her audience members every episode.  But, when she does, she does!  Which brings up the point of today’s post… 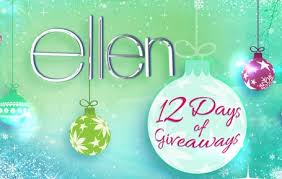 If I’ve done my math correctly, today should be Day 7.  For those of us at home, we too can have a chance to win.  Entry is simple, so why not give it a try?  I’m sure the likelihood of our winning is slim to none, but we definitely won’t win if we don’t play.  Right?

And, if this gets anyone who doesn’t already watch to check out Ellen’s show… yay!!  I really think you’ll like it.

What do you think?  Do you watch Ellen?  Will you enter the “12 Days of Giveaways” contest?  I’d love to hear from you!

9 Replies to “Tele-Tuesday: Ellen and the Twelve Days of Giveaways”