Oh, December… perhaps one of the busiest months of the year.  Many of us are moving at warp speeds trying to wrap up our holiday preparations AND deal with the end-of-the-year nonsense we all face year after year.  The days are flying by and before we know it, 2013 will be here and we’ll all be left wondering where the month has gone.  With all of the madness expected to surround us these next few weeks, Amber West and I have decided to revisit a few of our older Why It’s Worth a Watch Wednesday reviews instead of tackling anything new.

Even though I’m usually running around like a chicken with its head cut off in the evenings this time of year, I still have time for my TV.  However, most of the networks are about to start airing reruns, and many of the channels have a lineup of holiday movies playing hour after hour.  For some of us, we want and need something different.

Which is why this month is almost perfect for a mini-marathon-style watching party!  As we’re wrapping gifts or baking sweet treats, why not watch an older TV show with a fun concept and quite a few familiar faces?

So, today, I’ve selected one of my original Queue It Up reviews to spotlight: 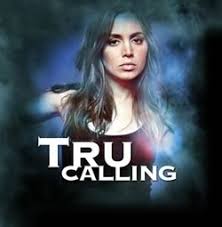 The series begins with recent college graduate, Tru Davies (Eliza Dushku from Buffy the Vampire Slayer), searching frantically for an internship hoping to get into medical school.  Most of the good placements have already been filled, so Tru takes the only job she can find—at the morgue.

As if working with the dead isn’t daunting enough, Tru must deal with the bodies temporarily awakening and asking for her help.  The very second she receives one of these requests, Tru’s day resets and she must race to figure out exactly what these souls are trying to tell her.

Mostly, when Tru’s day starts over, she tries desperately to stop the untimely deaths of those asking for her help.  But messing with fate always has its consequences.

Trying to manage her daily resets and keep her secret from friends and family, Tru also battles constant struggles with her irresponsible brother, Harrison (Shawn Reaves), her drug-addict sister, Meredith (Jessica Collins, The Young and the Restless), and her boyfriend Luc (Matt Bomer, White Collar), while still trying to lead a normal life.

Despite the chaos, Tru tries to stay grounded with the help of her best friend, Lindsey (A.J. Cook from Criminal Minds), and her boss at the morgue, Davis (Zach Galifinakis from The Hangover movies).  Davis might just be Tru’s biggest rock throughout the series, even if he’s a bit odd and awkward.

Jason Priestly (the “real” 90210) joined the cast midway through season one as Jack Harper.  There’s only one problem: his primary focus is to stop Tru and restore fate.

Typical of shows on Fox, Tru Calling was cancelled before answering all of the ongoing storylines.  This show will always live on my “gone too soon” list, and I proudly own both seasons on DVD.  One of the writers, Doris Egan, shared the remaining story arc in a two-part series via her Livejournal blog.  Without giving away any spoilers, the viewers learn all about Tru’s parents and Tru and Jack’s mentors.

Tru Calling earns a MacTV rating – pop some popcorn, grab a blanket, turn off the lights, spark up a candle, and watch episode after episode like a guilty pleasure.

I hope you especially enjoy a few of my favorite episodes; but before you get started, check out the theme song (Full Blown Rose’s “Somebody Help Me”) for just a tiny taste of what’s ahead.

If you don’t have a Netflix account, don’t worry!  Occasionally, SyFy airs a daily marathon of Tru Calling.

Did you watch Tru Calling?  If your days could reset, would you race against the clock to change fate, or leave things as they were?  I’d love to hear from you!

Come back next week when Amber and I choose another of our favorites to share….  Stay tuned!