Once again, television is hoping to cash in on the success of a previous TV hit—Sex and the City—and has created a spinoff series, hoping to attract today’s younger audience, and more than likely, all of those that worshiped the former HBO franchise.  Hey, I’m one of them.  Not only did I tune in every Sunday night with my girlfriends to watch Carrie, Miranda, Charlotte, and Samantha, but I also tortured my guy and forced him to take me to the theater to see both film continuations of the series.  Well, I didn’t force him, but I conveniently selected show times at our local full-service bar and restaurant/movie theater for the showings.  I figured if he could drink hard alcohol while sitting through the films, my chances greatly improved of getting him to take me.  I was right. 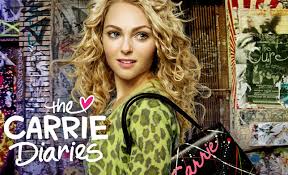 I won’t lie; I was hesitant to watch The Carrie Diaries at first, but the pilot won me over AND this is coming from a Sex and the City addict.

Despite the flashback to 1984, the creators did a great job of not making it look antiquated.  Granted, many of the ‘80s styles have and are still in the process of coming back today, but that didn’t take away from the classic elements present in the series: the vibrant colors, shoulder pads, big earrings, Rob Lowe references, the “brick” cell phones, and the music.

Let’s talk about the music for a second.  Anyone who claims to be a child of the ‘80s will love the tunes:

“I Melt with You” by Modern English
“Burning Down the House” by the Talking Heads
“Blue Monday” by New Order
“Material Girl” by The Bird and the Bee, a remake of Madonna’s classic hit
“Bette Davis Eyes” by Kim Carnes
“Footloose” by Kenny Loggins
“Girls Just Want to Have Fun” by Cyndi Lauper

The character of Carrie Bradshaw is known for many things.  First, she loves fashion.  We see the younger Carrie’s unique fashion sense when she takes her mother’s damaged purse and paints, in nail polish, a design to salvage it.  What does she paint?  Her name.  This reminded me of the famous Carrie necklace Sarah Jessica Parker wore throughout the years on the HBO series.  Nice touch, The Carrie Diaries.

The adult Carrie Bradshaw was also known for her writing, shared with television viewers via narration, where she told stories of friendships and tackled taboo topics such as women and sex.  At least women talking about sex was taboo it seems until Sex and the City hit television sets across the world.  Now, it’s kind of normal…

Teenage Carrie isn’t broken, but she’s hurt.  She’s trying to find herself and where she fits in this world.  Like most of us, she’s learning through life’s experiences, including love and loss.

“The pain of love is what truly changes us.”

“The losing of love, that’s what makes us who we are: the loss of a parent, of your virginity, of who you thought you might be, of your innocence.  Those losses are perhaps our first steps into adulthood.  Life gets more complicated… but it also opens your heart to new beginnings.”

Sounds like something SJP would have narrated, doesn’t it?

The CW series describes Carrie’s first kiss, personal connections, and self-realizations via narration the way only Carrie Bradshaw could.  The show tackles sexual topics such as virginity and being gay, closeted, and scared.  There are touching lines: “How could he have had sex with me and treat me like this?”  And there’s humor: Sex “is like putting a hot dog in a keyhole.”

And speaking of humor, the dialogue is fun and appropriate for the younger audience:

“The key to being a writer is figuring out who you are—finding your voice.”  ~ Carrie as she tears her room apart, searching for her mother’s purse.  She screams.  Loud.  “Well, that seemed to be the only thing I had found that day.”

It’s still early into the season, and I’m not saying The Carrie Diaries is my favorite CW program… because it’s not (The Vampire Diaries and Supernatural top the list with Arrow and Beauty and the Beast not far behind).  But it does outrank others.  I’m not sure it’s going to be as scandalous as Gossip Girl, a show that I couldn’t walk away from no matter how frustrating the character of Serena was, but The Carrie Diaries definitely piques my interest more than the new 90210 and a few others that have been cancelled recently or are in danger of being cancelled (Emily Owens, M.D. and Hart of Dixie).  Heck, TCD may not even rank higher than five on my list of CW television shows after Cult premieres in February… I am really looking forward to that one.  But it did surprise me, pleasantly surprise me.  And it will keep a spot on my DVR queue for now.

Saying the character of Carrie Bradshaw is iconic may seem a bit exaggerative, but is it?  Is it really?  Honestly, it could be argued either way.  For me, I’m going with iconic.  She (and her friends) affected me (I would have said touched me, but that didn’t quite sound right).  Watching those four women helped me realize that I could be myself, no matter what.  This is something I’ve always somewhat believed, but perhaps wasn’t nearly as comfortable with until watching their characters learn from their fictional life experiences—experiences we could all relate to one way or another.  Carrie, Miranda, Charlotte, and Samantha taught me it’s okay to be alone… that being happy within is the only way we can be happy with others.  But most importantly, the girls in Bushnell’s world reminded me that friendships are important.  I only hope that teenage Carrie does the same for the young girls today.

What do you think?  Have you watched The Carrie Diaries?  Are/were you a Sex and the City fan?  I’d love to hear from you!

And for fun, what do you think of The Bird and the Bee’s remake of Material Girl?

5 Replies to “A Teenage Love Affair with New York, Fashion, Friendships, and Dating in “The Carrie Diaries””