It’s time again for Catie Rhodes and me to break down another cinematic original and its remake.  Sticking with our usual ways, Catie reviews the original and I take on the remake.  This month we tackle the classic horror film, Fright Night. 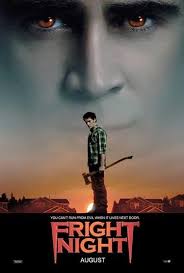 A teenager realizes his next door neighbor is a vampire and enlists a supposed vampire hunter to help him make his neighborhood safe again.

Before I begin, let me just say why I requested the remake.  Regardless of how ashamed I am to admit it, I usually choose the newer versions because I have not seen the originals.  However, this is not the case this time.  I’ve actually seen the 1985 film so many times, I decided to blog about it last week.

So why did I request the remake?  Two words—Colin Farrell.  Who doesn’t think this is the best casting for the sexy, dark role of Vampire Jerry? 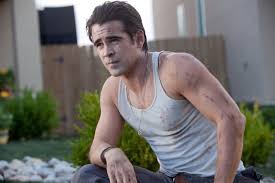 The storyline for the remake is quite similar to the original, although the screenplay added a few needed updates to make it its own: a teenage boy (Charley Brewster, played by Anton Yelchin) begins to believe his next door neighbor is actually a vampire.  But instead of him watching his neighbor (Jerry Dandrige, played by Colin Farrell) move in with coffin-like boxes like in the 1985 flick, it takes warnings from his best friend (“Evil” Ed Lee, played by Christopher Mintz-Plasse) and numerous classmates missing from school before he realizes his neighbor might actually be a blood sucker.  One thing leads to another, just like it always does, and Charley seeks assistance from a Las Vegas magician (Peter Vincent, played by David Tennant), who also has a reputation for allegedly being a vampire hunter, for help.

When Charley confides why he’s been acting so strangely to his mother (Jane, played by Toni Collette) and girlfriend (Amy, played by Imogen Poots), they both think he has lost his mind.  Vampires aren’t real!  Right?  Oh, but they soon change their minds… 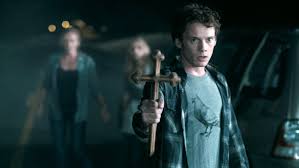 There’s more to the remake and to Vampire Jerry than in the original… he’s not just feeding off sexy women and whomever he pleases to survive, he’s building… something… I don’t want to give too much away, but I honestly liked this new tweak to the story.

Clearly, the cast is great.  And despite Mr. Farrell’s sexy and dark performance as Vampire Jerry, I think David Tennant’s portrayal of Peter Vincent might just be my favorite.  Most of the humor in this film surrounds Peter, and Mr. Tennant’s comedic timing is fantastic.  He most definitely should be applauded for making such an iconic role his own.  Because let’s face it, many watched the original Fright Night for Roddy McDowall. 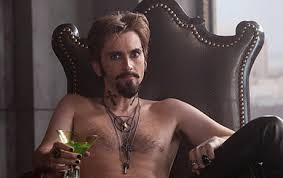 And speaking of the original’s cast… some might consider me a dork, but I love when actors and actresses from an older, or original, work are incorporated into the remake.  This tells me that not only do they want the work, but in a way it says they have given the reboot their blessing.  Regardless, it’s a small detail that I appreciate.  The Fright Night franchise would not be the same without Chris Sarandon, and even though his screen time is lightning fast in the 2011 film, I noticed and I thank all those involved in making this happen.

And like its 1985 predecessor, Fright Night (2011) is not a feel-good vampire movie.  It’s mysterious, dark, and at times spooky.  Even the music was eerie, particularly the instrumental “Welcome to Fight Night” by Ramin Djawadis.  When I heard this song in the opening credits, I knew I was in for a treat!

So how does the remake hold up?  Is it possible for someone who loved the original and watched it countless times as a little girl to enjoy it just as much?  The answer is an unequivocal yes!

The original was great, even if a bit campy when watched today as Catie mentioned, but this film, from a story-telling aspect, is better; it was more developed, allowing it to stand on its own in today’s market… especially for those who aren’t familiar with the franchise… and let’s hope that demographic is very small!

Without fail, the 2011 film did not disappoint this Fright Night fan (not at all like the 1988 sequel).

Before we go, Catie always lists some sort of fun trivia in her reviews, so I thought I’d throw one out there:

It is rumored that Heath Ledger was in consideration for the role of Jerry, but he passed away before the project kicked into high gear.  After watching his portrayal of the Joker in The Dark Knight, I have no doubt that Mr. Ledger would have been fantastic as Vampire Jerry.  May he rest in peace.

However, don’t worry;  Mr. Farrell nails it as far as I’m concerned!

What do you think?  Have you seen either the original or the remake of Fright Night?  If you’ve seen both, which do you prefer and why?  If you haven’t, do you want to?  I’d love to hear from you!