Television’s winter premiere season is officially here!  We’re currently down to the very last of the new shows premiering this TV season, but Amber West and I still have our work cut out for us.  And we have had so much fun these past few weeks posting dual reviews, we’ve decided to do it again!  Will Amber and I agree or disagree after watching ABC’s new drama, Zero Hour? 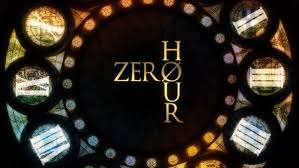 Shopping for antique clocks has never been so dangerous…

Hank Galliston (Anthony Edwards, Top Gun and ER) learns this first hand after his wife (Laila, played by Jacinda Barrett from—get this—The Real World: London) is abducted from her antique shop by a known international terrorist.  With help from a few friends, Hank uncovers a secret map hidden inside a clock from his wife’s inventory.  The clock and the map hold the key to a secret that a clandestine society and Catholic Church were sworn to protect for centuries—“a secret that could bring about the end of the world.”

The story begins in 1938.  With the Nazis taking over, the Catholic Church decides to move a hidden treasure from beneath the Cathedral and leave its fate to the future—to “the twelve.”

The number twelve is very symbolic in this story—twelve numbers on a clock; twelve men to save the world; the twelve apostles.  These twelve are not the Biblical apostles we’re familiar with, but the twelve men the church entrusted to save the world in 1938.  Each was give a secret that could end the world.  They scattered to all corners of the world to keep the secret from the Nazis… each equipped with their own clock.

If the twelve clocks, the twelve pieces of the puzzle are discovered and fall into the wrong hands, a storm will come… a war unlike any other… Zero Hour.

Fast forward to the present…

After his wife’s abduction, Hank finds a clock at his house that he doesn’t recognize and cracks it open; he believes his wife must have just recently acquired the antique for her shop.  He opens the piece to find a diamond—a diamond encoded with an old treasure map containing a language assigned to the priests that died over two centuries ago.

While digging for answers, Hank receives a call from the man holding his wife.  Instead of telling the FBI what the true ransom is—the clock—Hank tells them that the terrorist wants money.  They attempt to track him down, but the terrorist sends them on a wild goose chase while attacking a priest, Hank’s friend (played by Charles S. Dutton), who is holding the treasure.  This leaves Hank with no other choice but to take matters into his own hands.

The pilot moves fast and Hank uncovers many things at a rapid speed, leaving the audience wondering how exactly he knows what to do next—it’s a bit unbelievable if you ask me, even if he does have investigative skills as the head of a magazine.  But this is TV, and the action has to move fast to pull viewers in, so why not just jump right into it and not ask questions?

The creators have claimed this series is not The Da Vinci Code; however, for those that enjoy Dan Brown’s novels and conspiracy theories (Nazis, the Catholic Church, and international mysteries), this TV series might just be one to check out.

And I’m more inclined to call Zero Hour a mini-series.  Why?  Because the main storyline of Hank and his wife’s abduction will wrap up this season in the thirteen episode arc…  I like this, especially considering television networks’ tendencies these days to cancel series left and right like it’s their only job.  Of course, if Zero Hour takes, and audiences provide the numbers ABC is looking for, the writers and creators do have a fresh new idea for season two.

Each episode is supposed to reveal one clue at a time until the story concludes in the thirteenth episode.  I personally think the creators messed up on this one… why not make the season twelve episodes?  But I digress…  As to what these clues are, I will not share; but I like where this story is going.  However, I will leave a clue myself:  perhaps Hank didn’t find this particular clock by accident… 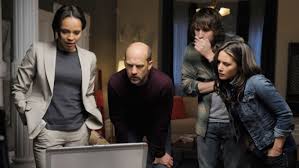 So how does Zero Hour rank?  I’m doing something I never do after watching a pilot episode—I’m giving the new “mini-series” the GMacTV rating!  I know it’s early, but I so want to know more… I’m hooked.  I love mysteries and clues, conspiracy theories, and well… television in general.  Let’s hope I don’t eat my words later.

What do you think?  Have you watched Zero Hour?  I’d love to hear from you!

Now click over to Amber’s blog and see what she thinks about the new Dan Brown-ish drama.  Did we agree or disagree?  Trust me; we usually have very different tastes in our television viewing pleasure….