For as long as I can remember, I have been a fan of the supernatural on TV.  Since the conclusion of Charmed and Buffy, I found a small void in my television viewing that needed to be filled.  Luckily for me, and the rest of the female population, we did have one program to keep us entertained in the meantime—Supernatural—but I’m greedy and wanted more.  Which is why when the CW launched The Vampire Diaries, I immediately set my DVR. 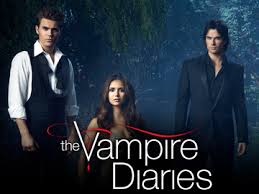 To me, there are three main characters of The Vampire Diaries: Elena Gilbert, Stefan Salvatore, and Damon Salvatore.  Now for whatever reason, I’ve never been an Elena or a Stefan fan.  However, Damon caught my eye and captured my heart from the get go.

But The Vampire Diaries is more than just Elena and the Salvatore brothers.  First, we have the three high school boys that make up Elena’s inner circle: Matt, Jeremy, and Tyler.  Next, we have Elena’s best friends: Bonnie and Caroline.  Not only are all five of these supporting cast members absolutely gorgeous, they’re likable… even when they act like the jock who’s better than everyone else (Tyler), or the ex-boyfriend who continues to be a doormat (Matt), or the little brother who will do anything to fit in (Jeremy), or the cheerleader who has to lead every single school activity… her way (Caroline).

Heck, even a few of the late-comers won me over more than Elena and Stefan ever have.  Take the older Alaric as an example.  Perhaps I liked Alaric because he was closer to my age, as well as a nice piece of eye candy.  But even when he was a hunter and he was trying to kill the vampire population, I still had a small TV crush on him.

Throughout the seasons, each character has become more and more evolved as well, building stronger and stronger individual arcs and making viewers like me appreciate them more than I already did.  Matt is the only human remaining out of the original cast members; Jeremy was cursed as a hunter; Tyler transformed into a werewolf and later into a hybrid (werewolf/vampire combination), courtesy of Klaus; Bonnie inherited her family’s ability to cast spells and has evolved into a powerful witch; and Katherine, Elena’s evil doppelganger, turned Caroline into a vampire, making her into what my family likes to call “Vampire Barbie.”  Even boring Elena and Stefan have turned it up a notch since the beginning with Elena now joining the vampire ranks and the on/again off/again moments where viewers experience “bad” Stefan, or Ripper Stefan.

And as the seasons roll by, the same remains true: I find myself still preferring everyone BUT Elena and Stefan—even the “bad” vamps (Katherine, Rebekah, and the super-sexy Klaus).

Many other characters have come and gone over the years, some by means of shocking deaths, but nothing could have prepared me for what transpired recently.  Since it has been over a week since the last new episode aired, I imagine it’s safe to discuss what happened.  But if anyone has yet to catch up, now would be the time to look away.

Previously, viewers had watched as Elena witnessed Klaus kill her aunt Jenna.  Jenna didn’t play a huge role, but she was involved enough to make many of us cry when she died.  Then there was Alaric’s death.  I, like so many, thought for sure he didn’t really die… the show would not do that… Alaric was one of the most popular characters on the show… he was the last adult/family figure to poor, orphaned Jeremy and Elena… but the writers really did kill him off.  There was hope for a little while that Alaric would be back as a ghost, and we saw him visit his buddy Damon a few times; but now the actor who played Alaric has his own CW show, so it’s doubtful he’ll be back now.

But the most recent death comes as the most shocking—Jeremy.  Prior to his suffering the hunter’s curse, we watched human Jeremy die multiple times; but as long as he was wearing his family ring at the time of his death, he could not die from a supernatural attack.  So when the new evil vamp, Silas, drained Jeremy of all his blood and snapped his neck, viewers still had hope—as did Elena.  But the ring no longer protected Jeremy; after all, he was a hunter now, a supernatural being in his own right.  His death was real this time and heart wrenching.  And even the usual boring and whiney Elena touched me when she finally realized her baby brother was gone for good this time, especially when she burned his corpse and her family home to the ground.

Why this was the direction the writers and creators felt the need to take is beyond me.  Perhaps the actor who played Jeremy wanted to pursue other projects… okay, send him away for a while like has been done in the past with both his character and Tyler’s.  But kill him?  And burn him?  Look, I’m a writer and understand we have to kill off our characters sometimes, but this seems like emotional overkill if you ask me.

Who knows if Jeremy will appear in any more episodes… even if he does, there’s no telling what these said appearances will entail—could be flashbacks, could be hauntings; but regardless, it won’t be the same without him.

Only three things can redeem the direction of this season for me at this point: “bad” Elena (Damon used his sire bond to turn her humanity off when she realized Jeremy was indeed dead), more Damon, and more Klaus.

Klaus—the evil Original with the sexy accent we’ve all grown to love over the years.  I’ve actually wanted to hug Klaus multiple times, and he’s supposed to be the BIG EVIL of the show.  Poor Klaus is so misunderstood and he really does let his feelings get the best of him, like any one of the multiple times he has come to the realization after the fact that Caroline is only playing his feelings for her to get what she and the group needs from him.  And Big Bad Klaus really does love his family, as evident when he witnessed his brother’s death at the Gilbert house this season… even if he has previously daggered them so they don’t interfere with his plans.

But The Vampire Diaries can’t really be all about Klaus, now can it?  Not when Elena, Stefan, and Damon are the main characters of the show.  And not when the supporting cast already has as many characters as it does with Matt, Jeremy, Tyler, Bonnie, and Caroline.  That’s a lot of screen time to share.  So what’s the next best thing for Klaus?

Give Klaus an opportunity at his own show!  Airing as an episode of The Vampire Diaries on April 24th, viewers will catch a glimpse of what it will be like having Klaus, Elijah, and Rebekah outside Mystic Falls.  Instead, this backdoor pilot will take place in New Orleans.   The potential spinoff will follow our favorite Originals and introduce a few new vamps, witches, and humans, as well as bring along Tyler’s seductive werewolf friend, Haley.

A few years ago, Fox tested the waters of a new drama by airing a backdoor pilot during an episode of the hit, Bones.  “The Finder” episode did well enough to land its own spot on the Fox lineup and lasted all of one season before it was cancelled.  Let’s hope “The Originals” pulls in a high enough ranking for the CW to grant it a full season order, giving us more Damon screen time on The Vampire Diaries and more Klaus all at the same time.  Only this go around, let’s hope the long-term results fare better for our favorite bloodsucking Originals than it did the cast of The Finder.

After all, I would personally love another hour of supernatural TV to watch every week…

How about you?  What do you think about The Vampire Diaries most recent death?  Do you plan to check out “The Originals” when it airs?  I’d love to hear from you!