I’ve made no secret of the fact that I love high school football.  Growing up in West Texas, I lived the real Friday night lights.  Everyone in the community either plays, cheers, or supports the local teams.  It was this atmosphere that gave me the idea for my Football Sweetheart series.  I took two things I loved—high school football and mysteries—and twisted them into stories of my own.

But enough about that.  Today’s post is the second installment of the High School Movie Showdown, and we’re featuring two of my favorite high school football movies—Varsity Blues and Friday Night Lights. 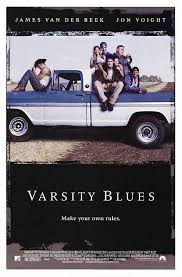 Varsity Blues follows a group of high school football players in the fictional town of West Canaan, Texas.  Anybody who’s anybody plays their part for the team.  Training begins at a very early age—girls perfect their toe-touches as soon as they can jump, and boys practice tossing the pigskin through a tire hanging from a tree as soon as they can stand.

Everything comes crashing down around the boys in West Canaan when the star quarterback (Lance Harbor, played by Paul Walker from the Fast and the Furious franchise) injures his knee during a game and his good friend and backup (Jonathan “Mox” Moxon, played by James Van Der Beek from Dawson’s Creek) is thrown onto the field and thrust into the spotlight.

Varsity Blues isn’t just about football, but more about teens finding their way in spite of what they have been conditioned to do.  This film is about as realistic as it gets when talking about high school football in West Texas, without actually claiming to be inspired by actual events: the coach’s win-at-all-costs attitude; the quarterback’s celebrity (everyone remembers the whipped cream bikini, right?); the realization that great moments are oftentimes the most painful; and the understanding that character is built by going against the norm.

Oh, and the ending can make even the toughest man cry. 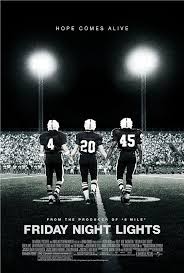 Next up, Friday Night Lights…

Football is life.  Win at all costs.

By now, everyone has heard of Friday Night Lights—whether it is the book by H.G. Bissinger published in 1990, the motion picture produced by Brian Grazer in 2004, or the television series starring Kyle Chandler and Connie Britton that aired from 2006 until 2011.

But today we’re focusing on the film.

Friday Night Lights follows Coach Gary Gaines (Hollywood great, Billy Bob Thornton) and his Odessa Permian football team.  Everything seems to be right on schedule and the boys are well on their way to accomplishing their one goal—win the Texas state championship.  That is until their star running back tears ligaments in his knee.

Coach Gaines is immediately under fire in the media and around town; a head football coach’s job is never safe in West Texas without wins.  And when a star player goes down, people panic.

And his players?  They’re faced with a mound of obstacles—a coach that pushes them too far, parents living vicariously through their teenage lives, and the societal pressures of the Odessa community.

The team pushes through and the season ends with a three-way tie in the district between Permian, their arch-rival Midland Lee Rebels, and Abilene Cooper.  With a flip of a coin, Permian and Lee move on (yes, they really flipped coins in the ’80s to break a three-way tie in conference when determining playoff spots).   And of course, Permian rolls through the playoffs and meets a Dallas team (Carter High School) in the state championship.

But you have to watch the movie to find out what happens next….

So, when paired up side-by-side, which of these films would win—Varsity Blues or Friday Night Lights?

Look, like I said earlier, I grew up in West Texas.  I served my football team as an athletic trainer and have first-hand knowledge what it’s like “behind the scenes” on the practice field, in the locker room, and on the sidelines.

These movies take me back—whether I’m watching Friday Night Lights and remembering the rivalry games between Midland Lee and Odessa Permian that I, myself attended since childhood; or I’m watching Varsity Blues and vividly recalling the blood, sweat, and tears I felt with the players on my team as they struggled to maintain greatness and take it to the next level.

Bottom line: Both films are fantastic and portray what high school football is really like in West Texas.  I truly believe that both movies will achieve cult classic status and live on through their fans year after year.

But which one would win in a head to head battle?  The fictional West Canaan High Coyotes, or the loosely accurate portrayals of the real Odessa High School Permian Panthers?

Regardless of how many times I have watched this movie, I still bawl my eyes out at the end of this film.  Yes, it’s fictional; but man, does it bring back memories of my senior year and our final football game.

Oh, and the music rocks!  Collective Soul, Loudmouth, Green Day, Foo Fighters, Third Eye Blind, and Van Halen are just a few of the artists featured on the soundtrack.  Even though these artists and their featured songs are popular in their own right, I still can’t hear one of these tunes without thinking of Varsity Blues.

How about you?  Varsity Blues or Friday Night Lights?  Leave your pick in the comments… I’d love to hear from you!