We have some changes coming to Why It’s Worth a Watch Wednesday… but for now, those can wait.  Today, Amber West and I are going back to our old ways and we’re covering two different shows—she’s reviewing ITV’s mystery, Broadchurch, and I’m taking on SyFy’s newest drama, Continuum.

I love the supernatural; however, I’m not that big on science fiction television… not like my guy, anyway.  He has watched everything on the SyFy network, from Battlestar Gallactica to Caprica, and all the Stargate series.  Wanting to spend some quality TV time with him, I have jumped in and checked out a few of the shows on his favorite channel.  And I have found a few of the more recent programs, like Warehouse 13, Haven, and Being Human very enjoyable.

Last year, SyFy began airing Lost Girl, a TV series already primed for season two in Canada.  The network started the episodes from the beginning and ran them consecutively so US audiences were all caught up.  I loved it—watching Lost Girl every week for almost twenty weeks was like an extended season of supernatural greatness.

And now the network is at it again… only this time, it’s with the SyFy UK hit and Canadian series Continuum.  As this show prepares for season two in Canada, the American audience gets to first catch up.

So, in true Tiffany fashion, I decided to give it a try… 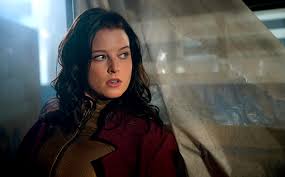 This science fiction program follows a group of convicted terrorists, or rebels (known as Liber8), from the year 2077 back in time to 2012.  Just as the gang was scheduled for execution in 2077, they somehow mastered time travel and jumped through a portal.  Inadvertently following them is Officer Kiera Cameron (Rachel Nichols from Criminal Minds), who takes it upon herself to prevent this group from altering events in the past and hopes to return them to their time.

As one would expect, the technology in 2077 is far more advanced than we’re accustomed to in 2012.  In the future, Kiera and the other police officers wear special uniforms—suits that enable them to research, analyze data, and track criminals once they are “tagged” with trackers… kind of like a computer.  But technology isn’t the only difference between their time and our time; small things have changed too, and games such as Rock-Paper-Scissors don’t exist anymore.

Lost in this new world, Kiera attempts to make contact with her control station via her communications system, but instead connects with a teen (Alec Sadler, played by Erik Knudsen from Jericho) working out of his family’s barn.  This boy happens to be the one responsible for inventing the technology she and the police use in 2077, and he begins serving her as her guide and confidant in 2012.

While still tracking Liber8, Kiera finds she must do something to fit in with the current times.  So after helping a local detective (Carlos Fonnegra, played by Victor Webster from Charmed and Mutant X) solve a case, she accepts a position with the Vancouver police as a member of a terrorist task force—after all, the VPD believes she’s a federal agent and sees no harm in extending this offer to her.

The series also stars: Tony Amendola (Once Upon a Time) as Edouard, the leader of the Liber8 rebels; Roger Cross (24) as Travis, another Liber8 member who takes charge until Edouard arrives; Lexa Doig (Andromeda) as Sonja, one of the female Liber8 members; and Stephen Lobo (Falcon Beach and Smallville) as Matthew, a former Liber8 member, who, after having a falling out with his fellow rebels, decides to help Kiera in 2012.

Like I mentioned earlier, I’m not all that big on science fiction programs; however, I have managed to watch the first six episodes of SyFy’s latest series with my guy (who really likes it, by the way).  And while I still don’t think Continuum is the best show on SyFy, it’s not bad; therefore, I’ll award the Canadian hit with the JFTV rating.  When there’s nothing else to watch, I’ll continue with the series… kind of like when I am searching for something to satisfy my late-night cravings and a bag of greasy potato chips is all I can find in the pantry.

But if anyone was to ask my guy, he’d probably give it a MacTV rating. 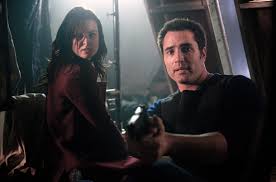 What do you think?  Have you watched Continuum?  I’d love to hear from you!

Come back next week when we share some big news… and maybe review something too.