If there’s anything we’ve learned over the last few years, we’ve learned to adapt to the constant adjustments the television networks make to our primetime TV schedules.  Just a few short months ago, the fall programming premiered—some of the September pilots passed the test and will live to see another day, while others have already been cancelled.  But for the most part, we’re hanging around until next month’s May Sweeps to find out which of our shows will return for the 2013-2014 television season.

In a unique turn of events, this year’s April Showers are bringing us more than just May Flowers—they’re bringing television audiences a new science fiction series on SyFy and a new supernatural murder mystery via Netflix.

Continuing with our New to TV in 2013 series from earlier in the year, here are a few more of the upcoming premieres we can look forward to in the next few weeks… 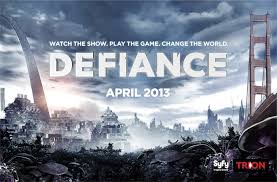 After an alien invasion in 2013, the humans and the aliens fought for years (“The Pale Wars”), destroying much of the planet.  But now, thirty-three years later, and following the destruction of the alien’s solar system (Votanis), the humans and the seven different species of Votans are trying to co-exist.

“This world has no natives, which means it belongs to everyone.”

The story follows Joshua Nolan (Grand Bowler, Ugly Betty) and his adopted alien daughter, Irisa (Stephanie Leonidas)—a member of the Irathient species—as they search for a better place to live.  The father/daughter duo runs into trouble and finds assistance from a group of strangers.  These strangers lead Nolan and Irisa to a familiar city, only recognizable by the remnants of its once beautiful city landmark…  St. Louis is no more—now they call it Defiance.

Let’s get to know the seven species of Votans: the Irathient – a near human, nature-loving, and deeply spiritual and peaceful species, with a skin color of almost bronze;  the Castithan – very similar to humans, with yellow eyes and a skin tone near albinism, who hail from an alien caste society—high and low, with most of the lower caste destroyed along with the Votanis solar system; the Indogene – a technically advanced species with white skin and no hair follicles; the Sensoth – aliens who are covered in fur and are taller than humans, similar to the orangutan; the Gulanee – a mysterious species, even to the other Votan; the Volge – the villain species; and the Mutants, which is pretty self-explanatory.

And to not be outdone, the humans created Biomen—fully synthetic marines prepared to protect our planet.

Based on the novel of the same name by Brian McGreevy, Hemlock Grove follows the story of two teenage boys— Peter Rumancek (Landon Liboiron, Degrassi and Terra Nova), a seventeen year old gypsy, who is rumored to be a werewolf, and Roman Godfrey (Bill Skarsgard, little brother to True Blood’s Alexander… aka Eric Northman), the heir to the wealthy Godfrey family estate, whose family has a few supernatural secrets of their own.

When a young girl is murdered, both boys are suspected for one reason or another.  And perhaps the only way they can prove their innocence is by working together…

All thirteen episodes of Hemlock Grove will be available Friday, April 19th exclusively on Netflix.

Of these two shows, I am most looking forward to Hemlock Grove.  You know me… I’ll pretty much watch anything that falls into the YA category, especially when supernatural powers and murder are involved.  The “darkness” of the trailer reminds me a bit of MTV’s Teen Wolf, a show we really enjoy in our house; there’s just one problem… Hemlock Grove is only available on Netflix.  Believe it or not, we don’t have a Netflix account—it’s not necessary when we never run out of things to watch on our DVR.  However, the online movie and TV giant does offer a 30-day free trial…

And with only the two to choose from, Defiance falls to the bottom of my list… but not my guy’s list!  He has reminded me every single time we see the ads for SyFy’s latest science fiction drama that he wants to watch it.  And for the sake of at least a review, I will too.

What do you think?  Will you check out either of these new series – why or why not?  I’d love to hear from you!