After two weeks of reviewing new summer TV shows, I’m back to taking a break from the regularly scheduled program.  Sort of.

While I’m not reviewing a new show that has never been seen before, I am showcasing a program that was new to TV in 2012… yet cancelled by CBS last May.

Because CBS couldn’t forget about Unforgettable.

That’s right… a network actually admitted (in a roundabout way) that they were wrong, or at least hasty, in one of their decisions.  And this doesn’t happen often—ever really—but CBS has officially picked up Unforgettable for a second season after canning it last year.

So, for the sake of today’s Why It’s Worth a Watch Wednesday post, I’m sharing an older post from 2011, featuring a show that returns to CBS next month with its brand new season. 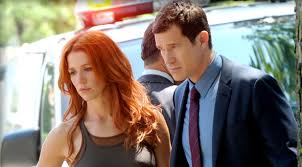 After assisting with the one case, Carrie decides to join Al and the NYC force with one major goal—solve her sister’s murder.

The other detectives on the squad (Detective Mike Costello played by Michael Gaston of The Mentalist, and Detective Nina Inara played by Daya Vaidya from Robbery Homicide Division) aren’t quite sure what to think of Carrie; both react as if they think she is weird and don’t appear to want to get to know her on a more personal level.  At first.

But Detective Roe Sanders (Kevin Rankin from Trauma) actually takes an interest in Carrie; he’s amazed with her recall and often times tests her memory, trying to catch her in a slip.  This friendly banter prompts Carrie and Al to open up and share her history and the mystery surrounding her sister’s death with Sanders.

Toward the end of season one, Unforgettable added a TV superstar to the cast – Jane Curtin (Kate & Allie was one of my childhood favorites… and who doesn’t remember Ms. Curtin from SNL back in the day?).  As Dr. Jane Webster, Curtin’s character will supposedly be crucial to Carrie’s ability to solve her sister’s cold case. 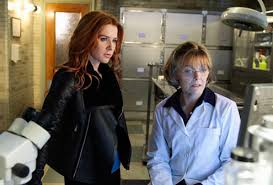 Additionally, Marilu Henner (Taxi) consults production.  Similar to the character of Carrie, Henner possesses the rare ability to recall all autobiographical events in real life, a condition known as hyperthymesia.  And of course, Henner also guest stars in a recurring role as Carrie’s aunt…

Carrie Wells is the ideal detective; especially considering she’s the perfect study subject for a mystery writer as she recalls everything about a crime scene.  Additionally, I absolutely adore Dylan Walsh; while I like Poppy Montgomery (big fan of Without a Trace and love the red hair), I initially watched Unforgettable because of Dr. Sean McNamara (Walsh’s character from Nip/Tuck).

Then there’s the story… with each episode, the writers give viewers not only the fresh case every week, typical of TV’s police procedurals, but also the ongoing serial mystery behind Carrie’s sister’s murder.  However, there is one downfall… the individual cases seemed a bit too predictable for me throughout season one.  I personally don’t like to watch one hour crime dramas only to have the “bad guy” figured out in the first ten or so minutes (my guy likes to call me a TV ninja; I’ve had to learn to keep my opinions to myself while watching police procedurals or I ruin it for him). 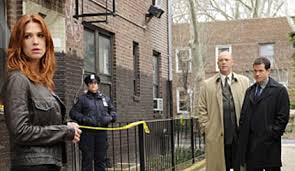 But don’t get me wrong; I recorded every new episode and usually watched Poppy and the boys within a week… and I remember thinking it was a shame the show was in danger of cancellation after the season finale last year.  Not to mention, I consider most crime dramas great writing research.  For this, I award the JFTV rating to Unforgettable—no matter the predictability, I’m hooked like a fiend, craving another greasy potato chip.  But, if I’m busy, this is a show that can pile up on the DVR and catch later.

Oh, and guys – this one’s for you: season one really liked to show off Poppy’s amazing arms.  Carrie wears a tank top in almost every episode.  Yea, I’m jealous… 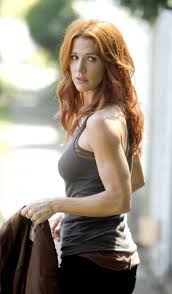 Did you watch Unforgettable?  If not, do you plan to this summer?  Are you as shocked as I am that CBS is bringing a show back after giving it the ax last year?  I’d love to hear from you!