It’s time again for Catie Rhodes and me to break down another cinematic original and its remake.  Sticking with our usual ways, Catie reviews the original and I take on the remake.  This month we tackle the classic horror film, The Amityville Horror. 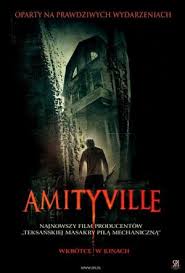 Some bargains are too good to be true.  After getting a great price on a historic home in which a set of gruesome murders occurred, a family is terrorized by a malevolent paranormal force.  This movie chronicles the twenty-eight days they lived in the home before fleeing for their lives.

It may be hard to believe, but I didn’t actually request to cover the remake this month.  To be honest either version was fine by me—I hadn’t seen either one in its entirety.  So, I let Catie choose which one she wanted to review before turning in any requests.  And with her decision to cover the original, I set out on a venture to grab a copy of the remake.

The Amityville Horror claims to be based on a true story, and it is—sort of.

On November 13, 1974, Ronald DeFeo, Jr., believing to be possessed, heard voices, instructing him to kill everyone in his house at 112 Ocean Avenue.  So he did—his father, mother, and four siblings (sisters, 13 and 18, and brothers, 9 and 12), all while sleeping in their beds.  DeFeo, Jr. is currently serving his prison sentence in New York.

These murders led to the release of the novel of the same name written by Jay Anson in 1977, as well as ten films.

The 2005 adaptation begins one year after the murders when a newly married man (George Lutz, played by Ryan Reynolds), his wife (Kathy Lutz, played by Melissa George from TV’s Alias and Hunted), and her three children move into the DeFeo house.  Despite learning about the multiple murders, the Lutzes decide to take the great deal on the house and begin their new lives together as one big happy family.  After all, “There are no bad houses, just bad people.”

But then strange occurrences begin to take place…  George wakes up every single night at exactly 3:15 a.m., the approximate time DeFeo killed his family; the family dog barks incessantly at something that can’t be seen inside the boat shed; and the young daughter (Chelsea, played by Chloe Grace Moretz from Kick-Ass and Dark Shadows) welcomes an imaginary friend into her life—a girl who lives in the closet.  Not only that, but George begins to feel ill and starts losing his temper with his wife and the children… something that is very unlike his personality.

One thing leads to another, and twenty-eight days later, the family flees for their lives… even if “Houses don’t kill people.  People kill people.”

While I haven’t seen the 1979 film in its entirety, I’ve seen enough to recognize a few similarities… like the priest being surrounded by an infestation of flies as he attempts to bless the house.  Ryan Reynolds even sports longer hair and the full-on beard like James Brolin.  And speaking of James Brolin, that is one man who gets sexier with age… am I right, ladies?

The real-life Mr. Lutz was allegedly not pleased with the 2005 remake.  However, in an interview, Lutz did confirm quite a bit about the details shown in the movie: the Lutzes did have the house blessed by a priest; the house and boat shed did indeed have “cold spots”; the Lutz family did discover a hidden room in the basement; and Mr. Lutz became sick not long after moving in.  In case anyone is interested, here’s Jeff Belanger’s interview with Mr. Lutz via Ghostvillage.com.

But let’s get back to the movie, specifically Ryan Reynolds.

I was looking forward to seeing Mr. Reynolds in this role.  I’ve loved him over the years in the raunchy comedies that launched his career—National Lampoon’s Van Wilder, Buying the Cow, Waiting…, and Just Friends.  Throw in the earlier action/adventure movies (Foolproof and Smokin’ Aces) and the romantic comedies (The In-Laws and The Proposal), and one might consider me a full-fledged Ryan Reynolds fan.  Heck, I can’t even count how many times we’ve watched The Change-Up and Safe House in our house… probably more than my guy would like to admit (and I’m sure he’d say I forced him to watch these movies over and over again, but whatever).

However, now that I’ve had the chance to watch him in this horror/psychological thriller, I’m sold.  Not only is he funny, and not only does he have a pretty face (and body, ladies…his body is plain insane in this film), but he can act. 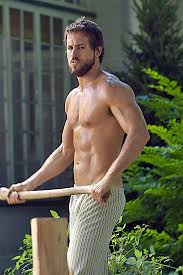 It was rumored that James Van Der Beek turned down this role.  And if that’s the case, I’m glad he did.

Bottom line, the 2005 remake did not disappoint this horror fan at all.

Before I go, I have a little personal history with the house at 112 Ocean Avenue.  Amityville, New York is approximately ten to fifteen miles from a house my godparents lived in when I was a young girl.  On a family visit in the late ‘80s, my parents took me to the DeFeo Murder House.  That’s right; I’ve been there… I only wish I could remember more.  Mostly, I remember the “nice” things from my trip to The Big Apple and Long Island, like visiting The Empire State Building, seeing my first ever homeless person and blue Mohawk, being pulled by a horse-drawn carriage through Central Park, and eating at Tavern on the Green.

However, visiting the real “Amityville Horror” house as a small child explains a lot as to why I love horror and true crime today… thanks, Mom and Dad.  Seriously.  I wouldn’t have it any other way.

What do you think?  Have you seen either the original or the remake of The Amityville Horror?  If you’ve seen both, which do you prefer and why?  If you haven’t, do you want to?  Have you ever visited the scene of a true crime and/or haunted house?  I’d love to hear from you!

And if anyone is interested, here is a forum site with FAQs that Mr. Lutz launched prior to his death…