Summer is the perfect time to fill our weekends with late night cinematic greatness.  After being out in the Texas heat, my guy and I only seem to have enough energy to curl up on the couch and pop in a movie.  Mostly we lean toward the comedies, wanting to laugh the week away, but we don’t shy away from the action flicks, adventures, dramas, mysteries, or even the fantasies… especially where zombies are concerned.

It’s been a while since I’ve shared a list of movies that come highly recommended here at The Ooo Factor, so it’s time…

Not your everyday zombie movie…

I must admit, I enjoyed Warm Bodies far more than I expected to.

Based on the novel of the same name by Isaac Marion, Warm Bodies follows R (Nicholas Hoult from X-Men: First Class), a recently turned teenage zombie, who in all actuality doesn’t like being a zombie.  He hates feeding on humans, but he will—after all, even zombies need to eat.  While out to “lunch” with a few other zombiefied friends, R runs into a group of human teens scavenging a local laboratory for supplies.  As one would expect, the group of zombies attack, and even R feasts on the brain of a young man (played by James Franco’s younger brother, Dave from Fright Night and 21 Jump Street).  And, when a zombie eats the brain of a human, he absorbs the human’s memories…

When R spots Julie (Teresa Palmer from I am Number Four), he falls in love and decides to do everything within his power to protect her.

There’s comedy, gore, and romance… just the right amounts to leave me feeling all warm and fuzzy inside.

Oh, and the soundtrack rocks!

Most everyone has already learned about my crush on Jason Statham.  I will pretty much watch any of his movies, just to get my “Statham Fix” in.

And Parker was no different.

Only this film was actually a bit different that I expected.  While there are the typical Jason Statham fight scenes, Parker has a solid story.

Based on the novel series by Donald Westlake, aka Richard Stark, Parker follows a down on his luck professional thief (Parker, played by Statham) as he seeks revenge against his former team for sticking it to him.  Left for dead, and rescued by a quaint farming family, Parker recuperates and tracks the team (Michael Chiklis—The Shield, the Fantastic Four films, and the recent one-and-done Vegas on CBS—Wendell Pierce—The Wire—and Clifton Collins, Jr.—The Event and another one-and-done, Red Widow) to Palm Beach where he learns they are planning another heist.

When Parker arrives in Florida, he hires a realtor (played by Jennifer Lopez, yes, the singer/actress/dancer/what does she not do?) to show him around.  While she thinks he’s a rich Texan looking to buy a multimillion dollar property, he’s actually searching the area for perfect hideouts (a cover house) for his former colleagues.  He finds them, she helps, and stuff goes down.  I don’t want to give too much away… but I will say this movie was pretty entertaining. 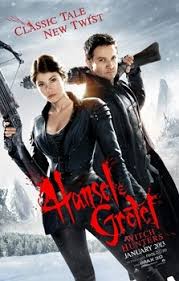 This is NOT a fairy tale for children…

Not that I thought it would be, but sometimes I never know going into a movie like this.  Let’s just say H & G drop a few “F” bombs, and well, this film might have a bit more gore than Warm Bodies.  Okay, a lot more.

We all know the story of Hansel and Gretel, right?  Two young children are left out in the woods by their parents to fend for themselves.  After wandering around with nowhere to go, the two happen upon a house made of candy.  They run to the house, break off what they can eat, and creep inside when the front door opens.  However, inside lives a mean witch who keeps Hansel chained up and forces Gretel into being her slave.  One day, when the witch is preparing to drop Hansel into the oven, Gretel breaks free and throws the witch in instead, saving her brother.

Same story, only in the film, Hansel and Gretel become famous for their ability to kill witches.  A local mayor hires the brother and sister to help find a group of local children who have recently gone missing, and agrees that his law enforcement will stand back and let them do their thing—kill as many witches as necessary along the way.

Hansel and Gretel: Witch Hunters definitely kept our attention.  I’m just not sure if my nephews (they’re eleven) should watch it or not…

I had hoped for more Jeremy Renner (I’ve really started to like him, especially after watching his performances in  The Town, Mission: Impossible – Ghost Protocol, The Bourne Legacy, and The Avengers), but I kind of felt jipped and thought Gemma Arterton (Gretel) had a bit more screen time.

Regardless, if you don’t mind the dark fairy tales, this one might just be for you.

10 Replies to “Beating the Summer Heat with Movie Madness”