It’s time again for Catie Rhodes and me to break down another cinematic original and its remake.  Sticking with our usual ways, Catie reviews the original and I take on the remake.  This month we tackle the horror film, The Grudge.

When someone dies with a deep and burning rage, a curse is born.  It gathers in the place where that person died and manifests on those who encounter the curse.  This film is a set of six vignettes, starring different characters, about a house in suburban Japan where a murder took place.

It may be hard to believe, but I didn’t actually request to cover the remake this month.  To be honest, I was hoping for the remake because I had already seen it… years ago, but either version was fine by me.  So, I let Catie choose which one she wanted to review before turning in any requests.  And with her decision to cover the original Japanese film, I found a copy of the American version via OnDemand and set it in my queue to rewatch.

And I’m glad I did.  Rewatch it that is.

I didn’t recall feeling favorable about The Grudge (2004) when I first watched it as a new release back in the day.  However, watching it again, my opinions of the film have changed.  After all, what is a sign of a good horror movie?  The suspense made me jump… impressive, considering I’d already seen it once before.

As Catie mentioned in her summary, the film follows six different vignettes, or small scenes, starring different characters who have all encountered the house and its curse in one way or another.

However, the main story follows a foreign exchange student (Karen played by Buffy the Vampire Slayer, I mean, Sarah Michelle Gellar) who has been volunteering at a care center for a social welfare credit.  When a fellow worker doesn’t report to duty, Karen gets the call to take over looking after an older woman confined to her residence.

And once she arrives, Karen realizes this was not the assignment she had been hoping for…

Rewind three years when the Saeki family lived in the house.  Once Mr. Saeki kills both his wife and son before taking his own life, the curse is born.

While watching the American version, I couldn’t help but think the son looked very familiar; he looked just like the boy in the movie poster for Ju-on: The Grudge.  How could that be?  Well, it’s because it was the same boy.  The actors portraying Toshio (the son), Kayako (the mom), and Takeo (the dad) all appeared in the Japanese film as the cursed Saeki family as well as in the American version.

Sam Raimi has had his hands in many other films, whether it is by acting, directing (the Toby McGuire Spider-Man franchise), or producing (The Evil Dead series, the Kevin Sorbo Hercules franchise, and many other “dark” flicks, including 30 Days of Night, Boogeyman, Drag Me to Hell, and The Possession).  And having seen many of his works, I can honestly say there’s a unique aspect he brings to each of his projects.  The Grudge is no different.

Perhaps one of the creepiest parts of the entire film is the sound the Kayako ghost makes when opening her mouth.  *Shivers* I almost forgot how freaky that clicking sound is. Ooh-waa-haa-haa-haa-haa-haa-haa-haa.  Forgive me, but I don’t know how else to describe it… 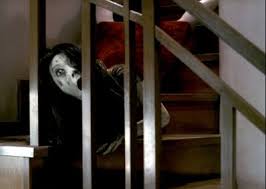 Oh, and speaking of creepy… the scene at the end of the film when Kayako moves down the stairs was supposedly not a special effect; it has been reported the actress really moved that way.  For anyone who has already seen the film, this scene is as disturbing as the Linda Blair head spin from The Exorcist.

Catie mentioned Ju-on: The Grudge and the story of its curse has some validity to it as far as Japanese folklore and mythology are concerned.  This probably helps explain why it’s rumored that the entire cast and crew of The Grudge (2004) were blessed before filming, hoping to prevent any evil from befalling upon them.

The Grudge spawned two sequels, also produced by Raimi.  I have not seen either of these films, but from what I understand, the story picks right up where the 2004 flick left off and continues. 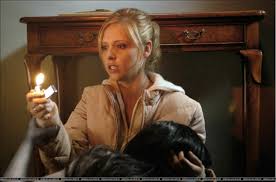 You know, the Japanese police really shouldn’t have saved the Saeki house from burning to the ground…

So how does the American version compare to the Japanese film?  That’s  right; I caught Ju-on late last night on the movie channels and can actually compare the two!  Well, the stories are quite similar… with only a few small differences; the Japanese version has subtitles; and more importantly, Ju-on doesn’t have Sarah Michelle Gellar.

What do you think?  Have you seen either the Japanese film or the American remake of The Grudge?  If you’ve seen both, which do you prefer and why?  If you haven’t, do you want to?  AND do you believe in curses?  I’d love to hear from you!