After my second DVR crash since March, I found myself scurrying around, trying to recover the 200+ recordings I lost.  Amongst those so inconveniently deleted was ABC Family’s Twisted.  Luckily for me, ABC Family aired a marathon not long ago and I was able to record all of the episodes, beginning with the pilot.  And with my TV time finally freeing up last week, I pressed play on the new teen murder mystery. 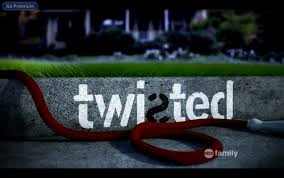 I’ve not kept the fact that I love ABC Family’s teen mysteries a secret.  Heck, I’ve only blogged about Pretty Little Liars at least five times.  And because I enjoy Pretty Little Liars as much as I do, I decided to give The Lying Game a try last year when it premiered.  Sadly, the network recently announced they will not renew The Lying Game for a third season, but that’s okay—now we have Twisted (and soon we’ll have Ravenswood, a PLL’s spinoff).

Twisted follows Danny Desai (Avan Jogia, from the popular Nickelodeon series, Victorious), a troubled teen recently released from juvenile detention after serving five years for his aunt’s murder.  Known as a “confessed, unrepentant murder,” Danny’s homecoming doesn’t go as smoothly as his family had hoped.  Looking for redemption, Danny immediately tries to reconnect with two of his best girl friends from his past—Jo (Maddie Hasson, from The Finder) and Lacey (Kylie Bunbury)—but even they have called Danny “socio” on occasion.

Since Danny’s conviction, Jo has had trouble moving on and is considered by many to be a social outcast, while Lacey has left her past behind… for popularity and a new boyfriend.  Bringing this group back together doesn’t go as smoothly for Danny as he had hoped, especially after a classmate is found murdered and he becomes the prime suspect—again.

Earlier, I mentioned that Danny confessed to his aunt’s murder.  And he served his time.  But like with every murder, everyone around town, including his two besties, wants to know why he did it.  Not helping his case, Danny sticks to his guns and will not say.  All he will tell anyone is that he had his reasons and that he is protecting them by not divulging the truth.

This only adds to the mystery surrounding Danny.  As a convicted killer, and after spending five years in juvie, one might expect him to be a bit rugged and short-tempered.  But he’s not.  For the most part, he takes the high road and avoids many of the physical altercations thrown his way by the “studs” of the school.  Danny is actually quite smooth, if you ask me.

But his eyes… his eyes tell a different story.  Granted, sometimes his eyes portray the sweet teen boy he appears to be externally; but sometimes, his stare alone makes me question his innocence.  Maybe Danny is a “socio”—I guess we’ll just have to wait and see…

Bottom line?  I watched all eight episodes of Twisted in three days.  Every free moment I could spare, I pressed play on another episode.  Now, do I like it as much as Pretty Little Liars?  No, not yet anyway.  But am I hooked?  Yes.  Have I figured out the mystery?  Nope—as Danny, Jo, and Lacey uncover new evidence, I’m thrown for a loop.  And it’s for all these reasons that I must award Twisted with the MacTV rating.  Because I absolutely hate waiting for the next episode, this new teen murder mystery deserves a rating higher than the JFTV ranking.  The water under this pot is definitely boiling and ready for some pasta!

Have you watched Twisted?  Do you plan to?  Do you think Danny is a sociopath?  I’d love to hear from you!