The fall television season is right around the corner, which means one of my favorite reality programs is coming back—Survivor. Now in its 27th season, Survivor follows tribe members (contestants of all races, ages, and backgrounds) as they battle it out to win immunity, hoping to Outwit, Outplay, and Outlast the other contestants.  They are isolated, usually at a beautiful tropical location with gnarly storm seasons, and they must build a shelter to survive.  During physical and mental competitions, the tribes earn rewards — flint for fire, fishing equipment, tarps, and luxury items (such as pillows and blankets — yeah, not very “luxury” by our definition, right?).  But no single prize is as great as the immunity idol.

The competitions aren’t the only obstacles standing in the way of the Ultimate Survivor winning the $1,000,000 cash prize.  The elements are intense, sometimes so brutal I don’t know how the contestants find the will to keep going.  And then there are the bugs.  The bugs are the number one reason why I could never play this game that I love.  Call me a pansy; call me what you will.  But I hate bugs — bugs that crawl; bugs that fly; bugs that breathe.  Period.  The number of bug bites on the contestants makes my skin crawl.

Fire is life in Survivor; without fire, even the water isn’t safe to drink.  I’m amazed every season at the number of contestants accepted onto the show who haven’t learned to master starting a fire using nothing but twigs and patience.

Everything considered, the most important aspect of playing Survivor is one’s ability to socialize — to form alliances.  Without the votes of the fellow tribe members, a contestant’s days on the island come to an end at tribal council (considering they don’t hold the immunity idol or a hidden immunity idol).

Of course, winning competitions over and over again does not guarantee the million dollar prize (does it, Colby?).  Aligning with the perfect partner/partners can carry someone all the way to the end.

One of the best alliances of all time might just be Rob Mariano and Amber Brkich (now Mariano) in Survivor All-Stars.  The two were playing the game for the second time and formed what many considered to be an unlikely alliance, but one that took them both to the end.  Together they claimed the first and second place cash prizes, and later pocketed the ultimate prize when they married and started a family.  I actually think Survivor has been more successful with couples marrying than the Bachelor and Bachelorette.    But I digress…

Are these people really villains?  No, of course not.  But do they play the game of Survivor to win at all costs, no holds barred?  Yes, and quite well at that.

Hosted by the ever-adorable Jeff Probst, Survivor has earned multiple award nominations and won.  How is this possible, considering every season is practically the same only with new contestants in a different location?  Because somehow Mark Burnett, Probst and the producers keep it fresh. 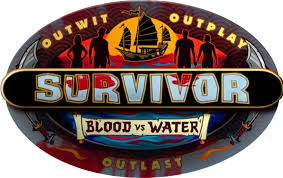 Take the new season for instance… “Blood vs. Water.”   This year, the field of twenty will consist of ten previous contestants PLUS one of their friends or a family member.   Will blood prove to be thicker than a million dollars?  I mean, water?

I thought for sure Rupert would be my favorite (returning) player this year, but Kat (from Survivor: One World) is bringing along her hot boyfriend… Hayden Moss, winner of Big Brother 12!  Go, Hayden, Go!

All things considered, does Survivor earn a GTV rating?  No, but it is definitely a guilty pleasure and sits firmly as a MacTV program.  Survivor is one of my favorite reality shows.  I have never missed a season.  Never.  Call me crazy, but I literally get giddy as the clock inches closer and closer to 7pm CST on Wednesday nights.  It’s exciting.

What do you think? Do you watch Survivor?  Who’s your favorite contestant over the years?  I’d love to hear from you!

2 Replies to “Why It’s Worth a Watch Wednesday – Survivor”