With Halloween having just passed, I have been busy watching a TON of the classic horror movies.  Thanks to AMC’s Fear Fest and the SyFy channel, I caught a lot of the Halloween franchise, the Friday the 13th franchise, and A Nightmare on Elm Street franchise over the course of the past month.

Not only have I seen Wes Craven’s 1984 A Nightmare on Elm Street, I’ve watched it so many times I’ve lost count over the years.  However, I still remember my first time…  I was a little girl, not quite ten years old, and Freddy Krueger scared the bejeezus out of me. 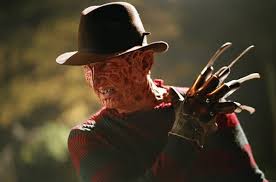 Since then, I’ve watched the original and all of the subsequent movies in the franchise probably more times than I should admit.  A few years ago, in preparation for the 2010 remake, I even hosted a group of girls for a Nightmare movie marathon.  Despite having seen the film countless times, the fear of Freddy and his razor-sharp claws still worked its magic… I checked under all of the beds and in all of the closets before going to sleep.  I know; I’m a dork—Freddy doesn’t get anyone while they’re awake, it’s after they fall asleep…

One thing’s for sure, the endearment “Sweet Dreams” changed drastically in 1984 when audiences met Freddy Krueger for the first time.

And, what about that eerie nursery rhyme with the little girls dressed in beautiful white baby-doll dresses jumping rope, singing, and having fun?

Say what you will, but that rhyme still spooks me to this very day!  Not to mention the fact that I have a hard time remembering the actual lyrics to the peaceful children’s song now.

Craven created the Nightmare franchise with his horrifying screenplay and his directing brilliance.  Robert Englund may still be recognized today as his character, Freddy Krueger, more than he is as Robert Englund, the actor.  This horror flick opened the door for nine feature films, including a 2010 remake.

According to Robert Englund in a 2010 interview for Biography’s Inside Story, A Nightmare on Elm Street is the “universal story of the bad dream, the nightmare, and the boogeyman.”  And I’d have to agree.

In each of the films, Freddy taunts and haunts a group of teenagers.  And only the teenagers understand—don’t fall asleep.  The adults… not so much.  All the adults (parents, nurses, etc) want the kids to do is get some rest.  Rest, as we all know, is the last thing these teens should be getting. 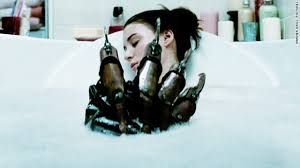 With every Nightmare movie, viewers can expect to see Freddy (of course), a cast of young, hot, and up & coming teens (ah-hem… Johnny Depp, anyone?), a few of the classic Freddy-esque scenes, and hear at least one of Freddy’s quirky one-liners (even though I read somewhere that when Craven first imagined Freddy, he pictured him being a silent killer, much like Michael Myers and Jason Voorhees).

Some of the movies are great; some are a bit campy and out there; but everyone around the globe knows who Freddy Krueger is.  Right?

Are you a Nightmare fan?  Which of the films do you enjoy most and why?  I’d love to hear from you!

6 Replies to “When Nightmares Kill…”