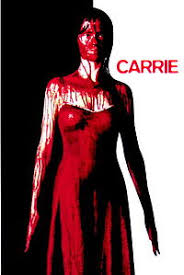 Before I begin my review of the 2002 remake, let me first begin by saying a few things about the 1976 film.  As with many of Stephen King’s works, Carrie is and forever will be a classic horror story.  Honestly, the original version ranks right up there with The Shining, Misery, Cujo, Silver Bullet, Pet Semetary, and even the TV movie, It.  I can watch any of these films, plus many more King adaptations, over and over again.

But enough about the original, let’s talk about the 2002 remake.

When I first agreed to take on this film, Catie warned me.  But I always enjoy comparing remakes to originals, even if the recent plethora of remakes does worry me about the lack of originality in Hollywood today.  So I did a quick search on my DVR; found the 2002 film and set it to record; and eventually sat down and watched it.

First of all, I almost turned it off five minutes in.  The quality was horrible and I thought to myself that the film appeared to be a low-budget made-for-TV version of the original.  Little did I know at the time, it was.

But I stuck through it, mainly because you can’t review a film after watching the first five minutes.  The story was *kind of* the same as the original, although they did take a few liberties of their own throughout, and the special effects were horrible.  Especially for 2002.

The performances weren’t all that bad, especially not Patricia Clarkson as Margaret White.  She was great. And of course Angela Bettis (Carrie) and the beautiful Rena Sofer (Miss Desjarden, the remake’s version of Miss Collins) weren’t horrible either; but  everyone else… not so much. 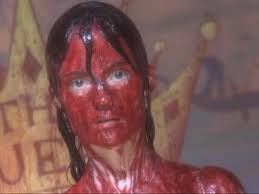 Now, I also went to the theater to see the new 2013 Carrie film starring Chloe Grace Moretz and Julianne Moore before watching the 2002 “movie.”  Tune in Friday to find out how it compares to the 1976 original and the 2002 version.

And before I go, let me just say that I particularly like the idea of watching Carrie today, especially with the world of bullying where it is now.  Bullying has always existed, at home, at school, and all bullies need to know that eventually everyone gets theirs.  Maybe not via telekinesis like in Carrie, but they do in one way or another.  Therefore, why bully in the first place?

What do you think?  Have you seen either the original or the 2002 version of Carrie?  If you’ve seen both, which do you prefer and why?  If you haven’t, do you want to?  I’d love to hear from you!