Only this time I’m going one step further.  Not only did I review the 2002 TV movie, I also went to the theater to see the 2013 remake starring Chloe Grace Moretz and Julianne Moore. 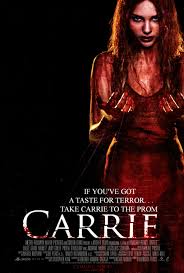 Before I begin my review of the 2013 remake, let me first begin by saying a few things about the 1976 film.  As with many of Stephen King’s works, Carrie is and forever will be a classic horror story.  Honestly, the original version ranks right up there with The Shining, Misery, Cujo, Silver Bullet, Pet Semetary, and even the TV movie, It.  I can watch any of these films, plus many more King adaptations, over and over again.

But enough about the original, let’s talk about the 2013 remake.

Rarely do my guy and I actually go to the theater to see any film that is not summer’s big action blockbuster.  But when I saw the trailers for the updated version of Carrie, I knew I couldn’t wait for it to be on video.  Luckily for me, the release fell during the month of October and I was able to convince my guy that dinner, a haunted house, and a movie would be the perfect Halloween date for me.  He knows how much I love the spooky holiday, so he obliged even though he is not a fan of horror like I am.  However, he is a fan of Hit-Girl, so I didn’t have to beg too much…

Let’s start by briefly talking about the basics… the story is pretty much exactly like the original and the special effects are amazing.

Okay, now that that is out of the way, let’s talk about the performances…

Chloe Grace Moretz is perfect.  And Julianne Moore is amazing.  AMAZING.  I always tend to like her in most of her films; but now after watching her play creepy Margaret White, I’m really a fan.  Then there’s Judy Greer as Miss Desjarden; she’s not the star, but I like her and the fact she voices Cheryl on Archer has nothing to do with it. 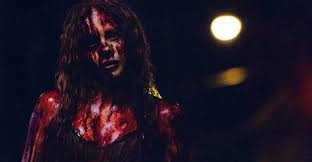 Does it compare to the original?  Yes.

Should people forget about the original?  No.

Let’s be honest; today’s youth isn’t going to watch a film from 1976.  Maybe a small handful will, but not the majority.  I get it; I was a teen once.  But kids today will go see this 2013 version.  And they did, the same showing I went to.  And I was lucky enough to hear a teenager’s conversation with her friend after the movie in the restroom (along with two other adult women).  To loosely quote them…

Do I disagree with them?  Yes.

But what I found even more amusing was the open dialogue the other two women and I had once the girls left the room.  For one, those two teens clearly didn’t know Carrie is based on a Stephen King novel (if they even know who Stephen King is).  And two, obviously, they’ve never seen the original 1976 film.

It’s a sad world sometimes… now I know why my mom would always get so frustrated with me when I didn’t want to read or watch anything that wasn’t “new” when I was growing up.  I get it, Mom.  I really do.

Before I go, let me just say that I particularly like the idea of watching Carrie today, especially with the world of bullying where it is now.  Bullying has always existed, at home, at school, and all bullies need to know that eventually everyone gets theirs.  Maybe not via telekinesis like in Carrie, but they do in one way or another.  Therefore, why bully in the first place?

What do you think?  Have you seen either the original or the 2013 version of Carrie?  If you’ve seen both, which do you prefer and why?  If you haven’t, do you want to?  I’d love to hear from you!