Today I’m jumping in with one of my most anticipated shows of the season—The Originals. 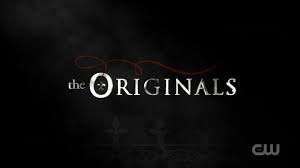 For as long as I can remember, I have been a fan of the supernatural on TV.  Since the conclusion of Charmed and Buffy, I found a small void in my television viewing that needed to be filled.  Luckily for me, and the rest of the female population, we did have one program to keep us entertained in the meantime—Supernatural—but I’m greedy and wanted more.  Which is why when the CW launched The Vampire Diaries, I immediately set my DVR.

To me, there are three main characters of The Vampire Diaries: Elena Gilbert, Stefan Salvatore, and Damon Salvatore.  Now for whatever reason, I’ve never been an Elena or a Stefan fan.  However, Damon caught my eye and captured my heart from the get go.

Then there’s also the supporting cast—Matt, Jeremy, Tyler, Bonnie, and Caroline—all of whom I find more enjoyable than Stefan and Elena.  Heck, even a few of the late-comers won me over more than the two “stars” ever have.  But before I go any further, let me add that just because I don’t like the Stefan and Elena characters, doesn’t mean I haven’t appreciated their performances, especially Nina Dobrev’s.  She’s brought tears to my eyes more times than I can count.

But as the seasons roll by, the same remains true: I find myself still preferring everyone BUT Elena and Stefan—even the “bad” vamps (Katherine, Rebekah, and the super-sexy Klaus).

We first met Klaus (played by Joseph Morgan) during season two of TVD and watched the bad-boy vamp as he killed Elena’s and Jeremy’s Aunt Jenna right in front of us.  Bad, right?  Just flat out mean!  So why do I love the character so much?

Because over the seasons, like many of the other characters on TVD, Klaus has evolved, building a stronger individual arc and making viewers, like me, appreciate him more than I already did.

Klaus—the evil Original with the sexy accent… born a werewolf but cursed by magic to the immortal life (vampirism).  I’ve actually wanted to hug Klaus multiple times over the years (and he was supposed to be the BIG EVIL of the show).  Poor Klaus is so misunderstood and he really does let his feelings get the best of him, like any one of the multiple times he has come to the realization (after the fact) that Caroline is only playing his feelings in order for her to get what she and the group needs from him.  And Big Bad Klaus really does love his family, as evident when he witnessed his brother’s death at the Gilbert house last season… even if he has previously daggered them (which in essence puts them in a deep sleep until the dagger is removed) so they wouldn’t interfere with his plans.

But here’s where it gets tricky: The Vampire Diaries can’t really be all about Klaus, now can it?  Not when Elena, Stefan, and Damon are the main characters of the show.  And not when the supporting cast already has as many characters as it does.  That’s a lot of screen time to share.  So what’s the next best thing for Klaus?

Give Klaus an opportunity at his own show!  Originally airing as an episode of The Vampire Diaries on April 24th, viewers caught a glimpse of what it would be like having Klaus, Elijah, and Rebekah outside Mystic Falls.  Instead of hanging out at all the same locations as our TVD kids, this backdoor pilot took us to New Orleans.   This then potential spinoff followed our favorite Originals and introduced us to a few new vamps, witches, and humans, as well as brought along Tyler’s seductive werewolf friend, Haley (the beautiful Phoebe Tonkin).

Within a day of the backdoor pilot airing on the CW, The Originals was given the green light.  I watched it.  And I liked it.  It was a breath of fresh air, stepping away from boring Elena and Stefan.  The pilot had it all—Klaus’ old vampire running mates, witches and their spells, and the promise of a hybrid baby.

Oh, and I almost forgot—King Klaus.

The only thing missing was my beloved Damon.

So how did Klaus make his way back to his old stomping grounds?  He was summoned by a witch.  There’s only one problem:

Marcel (Charles Michael Davis) stepped in when Klaus left and now he runs New Orleans.  One of his rules?  No witch can use magic.  And when he learned of this particular witch casting spells, the one who unbeknownst to him summoned Klaus, Marcel killed her in the street in front of all to see (including Klaus) to set an example of her.

That, plus the witches are holding hostage Klaus’ first hybrid baby (Haley is pregnant with “a magical miracle baby”).  While Klaus is putting up a tough front and acting as if he doesn’t care about the baby, his siblings (Elijah, played by Daniel Gillies, and Rebekah, played by Claire Holt) know all too well that all Klaus has ever wanted was a family.  And power.  And loyalty.

After having seen The Originals first episode, I awarded it the MacTV rating.  For a pilot, it really wasn’t all that slow, nor did it throw too much information at the viewers all at once.  I’m sure that’s because the characters were already developed through their seasons on The Vampire Diaries, but still—it was a bonus for a new program.

Now well into the season of the new series, I’m downgrading it just a bit to the JFTV rating.  This downgrade is not because I don’t like the series.  I do.  The Originals is a fresh escape from TVD.  But I am behind and I don’t have the urge to catch up right away—even though I know I will dig back in eventually, just like the classic junk food items we try to avoid.  After all, it has vampires, witches, and werewolves—Oh My!

What do you think—do you watch The Originals?  I’d love to hear from you!