It’s time again for Catie Rhodes and me to break down another cinematic original and its remake.  Returning to our usual ways, Catie reviews the original and I take on the remake.  This month we tackle the horror film, The Fog.

A small Oregon island prepares to celebrate its founding fathers only to find a supernatural force wants to mark the celebration in a less festive—and more deadly—manner.

Fog… fog is a lot like darkness.  The restriction of one’s visibility and inability to see clearly is a bit spooky.  Anyone who has ever driven in a thick fog knows exactly what I’m talking about—it’s stressful not knowing what is directly in front of you.  And perhaps it’s because of this that fog is now associated more times than not with horror—images, movies, etc.  Although I haven’t had the reveal yet, I even use fog on the cover of my second YA release to add to the allure and mystery of the story.

But let’s talk about the 2005 remake, starring Tom Welling (Smallville), Maggie Grace (the Taken films), and Selma Blair (from one of my favorites, Cruel Intentions).  Tom Welling plays Nick Castle, the hero of the story.  When I first heard of this film back in 2005, not only was I intrigued by the title and concept (because I love horror), but I’d watch this Superman in pretty much anything.

Anyway, here’s an interesting bit of trivia: the character of Nick Castle is named after the actor who played “The Shape” in Carpenter’s Halloween.  Remember, Carpenter created the original 1980 film.

So I rented the 2005 movie one Friday night…

Years ago.  Back when it first hit the video stores.  And then, I felt The Fog was a pretty good flick, especially when watched in the dark.  And by the way, the sink scene (you’ll know what I’m talking about) got me…

But did it scare the bejeezus out of me?  No.

And this time when I watched it specifically for this review?  Nope.  Not this time either.  To be honest, I had hard time keeping interest this go round. 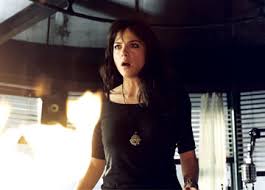 However, let me be clear.  I did not have a hard time watching because it’s horrible, or deserving of some of the “bad movie” awards it won (the Fangoria Chainsaw Awards for Worst Film and the Stinkers Bad Movie Award for Least Scary Horror Movie), but because I had already seen it and nothing really surprised me this time.

After all, that is what I look for in a horror movie… does it keep me on the edge of my seat?  Does it surprise me?  Is it intense?  Because let’s be honest, I’ve come to the conclusion that no movie actually scares me.  I just watched The Conjuring this week after hearing so many things about how it’s the scariest movie people have seen in ages.  Yet, I didn’t find it scary one single bit.  Intense.  Yes.  But scary?  No. 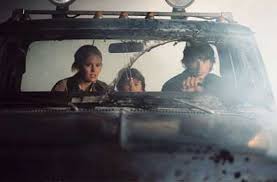 So is the 2005 film version worthy of a watch?  Why not?  If you haven’t already seen it that is…

However, I can’t compare it to the original.  And that’s one reason why I love this series so much.  Often times, I don’t even realize the more recent films are even remakes, like this month.  Not only was I not aware of the 1980 film, I had no idea it was a John Carpenter flick.  Bottom line, I will now have to watch the original just because.

What do you think?  Have you seen either the original or the 2005 version of The Fog?  If you’ve seen both, which do you prefer and why?  If you haven’t, do you want to?  I’d love to hear from you!