With 2013 coming to an end, and the new winter television schedule right around the corner, I have decided to take a break (of sorts) here on Why It’s Worth a Watch Wednesday.  I say “of sorts” because instead of reviewing a fresh new series, I want to feature a show that I am looking forward to returning in the 2014 TV season.

And one that I am most excited about?  The Following… 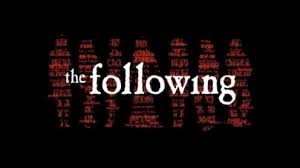 There’s only one problem; like most serial killers, Carroll has fans now… people who are willing to do anything to help him succeed.

It takes very little to pique my interest when a new pilot premieres on television; I’ll watch pretty much anything.  But there are a few things that instantly attract me to a new show: the concept, the actors and actresses, and the attention to detail, particularly the music.  The Following had me at “hello” if that’s even possible for a TV program.

First, the serial drama follows the “cat and mouse” game between Carroll and Hardy.  The idea of a former FBI agent with issues working to track down a demented killer he once captured is right up my alley.  Next, the series stars, as already mentioned, Hollywood great Kevin Bacon.  I can’t even remember the last time Mr. Bacon starred in a TV series, if he ever has, which tells me the storyline really captured his attention as well.  And third, the pilot episode began with Marilyn Manson’s rendition of “Sweet Dreams.”  The musical introduction of this song grabs me every time… and the lyrics fit perfectly with the Carroll/Hardy scene at the end of the pilot.

So, is The Following worth following?

For me, the answer is an astounding yes!  Although I usually prefer mysteries and whodunits, the premise of not only the “cat and mouse” game between Carroll and Hardy, but also the concept that Carroll’s crazies, or followers, who will do absolutely anything and everything to convey Carroll’s messages, is quite unique to television—and frightening, considering there are people in our world who worship some of the worst criminals for all the wrong reasons.

Viewers are immediately taken into the mind and history of the two main characters.  The protagonist, Hardy, is now a retired FBI agent, who is also a recovering alcoholic and a man fighting to stay healthy (he has a bad heart).  And the antagonist, Carroll, who’s not only a murderer, worked previously as a literature professor obsessed with Edgar Allan Poe.

“Carroll was obsessed with the Romantic Period… in particular, his hero, Edgar Allan Poe.  And like Poe, he believed in the insanity of art, that it had to be felt.  He didn’t just eviscerate fourteen female students, he was making art.  He cut out his victims’ eyes as a nod to his favorite works of Poe: ‘The Tell-Tale Heart’ and ‘The Black Cat.’ See, Poe believed the eyes are our identity, windows to our soul.  To classify him (Carroll) as a picarist would be too simplistic.” ~ Hardy about Carroll to a group of FBI agents

As the pilot begins, we learn immediately that Carroll has escaped from prison and Hardy was responsible for locking him away.  But how did Hardy catch Carroll in the first place?  The Following uses a series of flashbacks to tell the backstory of these two characters.  And probably the most fascinating flashback shows us that Hardy used Carroll’s wife (Claire, played  by Natalie Zea from Justified and Californication), who also happens to be a professor, as an expert during his investigation.  Hardy had visited her on multiple occasions for help in tracking down the killer and she unknowingly led him in the direction of her own husband.  Clearly, this gives Carroll reason to haunt and torture both Hardy and Claire… and I’m sure the fact that the two shared a romantic connection doesn’t help either.

I must confess, I thought the actor playing agent Weston was also the actor who plays Jinks on Warehouse 13, but it turns out it’s not—they are twin brothers!  Just a tad bit of trivia…

Oh, and if it’s even possible to fall in love with a bad guy, Roderick is that man.  But I digress…

Watching The Following is similar to enjoying a major motion picture thriller.  It’s intense, suspenseful, somewhat dark, and it keeps viewers on the edge of their seats with an occasional reason to jump out of their skin.  Toss in the Edgar Allan Poe references, who might just be my favorite poet, and I can’t help but award the Fox serial drama with the GTV rating.  Fox has themselves a groundbreaking television series, appropriate for viewing after dark with a perfectly grilled bone-in filet, steamed broccoli, and a glass of fine red wine.

And just when you think the story has wrapped up, as implied during the season one finale, they leave us with just a little taste of more to come…  I can’t wait to see what The Following has in store for us in the new season!  And with almost an entirely new cast, including Connie Nielsen (Gladiator and Basic), James McDaniel (NYPD Blue), Jessica Stroup (the newer version of 90210), and Keith Carradine (Dexter and Damages)!

The Following returns in a two night event this January (Sunday the 19th and Monday the 20th).  Why we’ve had to wait so long is beyond me.  But I’ve waited this long and I can wait a few more weeks…

Oh, and I just thought the Edgar Allan Poe masks were creepy in season one.  The Joe Carroll masks in the season two commercials are even worse!

What do you think?  Have you watched The Following?  I’d love to hear from you!