It’s time again for Catie Rhodes and me to break down another cinematic original and its remake.  Returning to our usual ways, Catie reviews “the original” and I take on the 2013 remake.  This month we tackle the classic, The Lone Ranger. 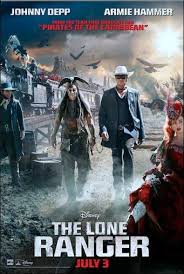 Usually I include Catie’s homemade summary here, but since hers sounds a bit different from the 2013 film I will talk about today, let’s “borrow” the IMBD summary:

Native American warrior Tonto recounts the untold tales that transformed John Reid, a man of the law, into a legend of justice.

Now, let’s watch with the trailer:

Before I begin my review of the 2013 version, let’s talk generally about The Lone Ranger.  As Catie pointed out in her review, the concept of The Lone Ranger dates back to the 1930s when a radio show aired three episodes a week for over twenty years.  Then came the books, a newspaper comic strip, comic books, a television show, and multiple movies.  The 2013 film falls in at number five.

When something lasts and lives this long, one can assume it has reached cult status.  And I am no different from the millions of other fans—I grew up loving The Lone Ranger.  How did my admiration begin?  I have no idea; since the TV show aired from 1949-1957, I think we can rule that out.  Maybe it was the 1981 film from Catie’s review?  But if it is, I sadly don’t remember much, if any of it.  However, the movie makes sense to me… since I grew up a child of the ‘80s.

Regardless, I was a fan and proudly hung a poster next to my bed.  I wish I still had that poster, but it is lost along with so many of my other childhood things.  But I remember it… The Lone Ranger atop Silver; Tonto riding Scout; the two riding alongside each other, perhaps with Silver rearing back.   That part is a little blurry to me.  Give me a break; it has been a long time. 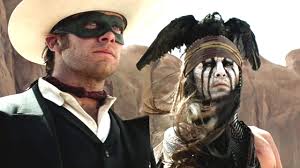 When I first heard they were making a current film version of The Long Ranger I was thrilled beyond belief.  And when I learned Johnny Depp would play Tonto?  Are you kidding me?  Elated.  Ecstatic.  Excited.   I mean, first of all, he’s Johnny Depp.  Everything he touches turns to gold.  Not to mention, his performances are always above and beyond perfect.  He transforms into character; he doesn’t just act a role.  And to me, the powers-that-be behind this movie couldn’t have picked a better person to play Tonto.

Additionally, the casting of Armie Hammer as The Lone Ranger (John Reid) was great.  He and Depp had on-screen chemistry and his comedic timing was spot on.  Not to mention, it’s believable seeing him in the role of a hero—he can pull it off.  Nothing like his role as the evil twins in The Social Network.

The film also stars: Helena Bonham Carter (as we’re very accustomed to seeing in Johnny Depp films), Barry Pepper (whom I adore, although he’s barely recognizable in this film and he plays a not-so-nice guy), William Fichtner and Tom Wilkinson.

The film may have received mixed reviews; however, as one who has never really paid much attention to the critics (odd, I know, considering I write reviews of one kind or another on a weekly basis), I really enjoyed this film.  I did have a few beefs though…

For one, it was long.  Usually when a viewer notices that a film is long, that means the film is dragging.  And it did in parts.  Secondly, although I love The Lone Ranger theme song (from the “March of the Swiss Soldiers” finale of Gioachino Rossini’s William Tell Overture), when it played in the 2013 flick, it blasted my eardrums.  Flat out, it was way too loud.  I compare it to when a commercial plays at a higher decibel then the television show one is watching.  BIG pet peeve of mine.  And third, The Lone Ranger didn’t say, “Hi-Ho Silver, Away!” until the very end.  And I mean the very end.  I was waiting, and waiting, and waiting, and waiting, and then he said it and the credits rolled.  It bummed me out that it took so long. 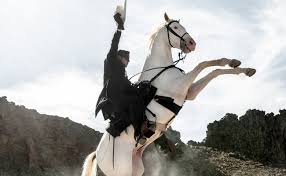 But overall, is the 2013 version worth a watch?  Yes!  I think so.  Especially if one is a fan of any of The Lone Ranger stories—the TV show, the movies, the comic books, etc.  Particularly if one is a fan of Johnny Depp.  And without a doubt if one likes to laugh.  Even those who enjoy westerns should check it out.  And I don’t like westerns.  Can’t stand them, actually.  But I do fall into the three other categories.

Should people forget about the original/1981 version?  Probably not.  Originals should never be forgotten.  But again, I can’t really speak from experience here.  Stop by Catie’s blog to see what she thought of the 1981 film.