Fall Television is officially here!  With all of the new TV programs airing this fall, Amber West and I have a ton of homework to do…  This week, we tuned in and watched two of the most recent additions to the comedy lineups for our Why It’s Worth a Watch Wednesday reviews—NBC’s Guys with Kids and ABC’s The Neighbors. 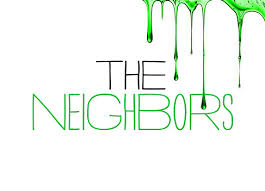 The new ABC comedy follows the experiences of the Weaver family, the first human family to move into Hidden Hills in the ten years its current residents (aliens from the planet Zabvron) have been waiting for instructions to return home.  At first, the Weavers believe their new neighbors are just weird (they dress alike AND they are all named after famous athletes), but do weird neighbors really cry out a nasty goo from their ears when upset?  No… that would be aliens.

The series stars Lenny Venito (one of Sipowicz’s snitches from NYPD Blue) and Jami Gertz (one of my favorite ‘80s actresses from movies like Sixteen Candles, Lost Boys, and Less Than Zero) as Marty and Debbie Weaver.  The Weavers have waited for years to get their family of five (Amber, the typical cranky teenager; Max, the take it or leave it preteen boy; and Abby, the youngest and typically adorable daughter) out of their crammed New Jersey apartment, and when the first unit in Hidden Hills opens up they snatch it.

Immediately welcoming the Weavers are the neighbors, a group of identically dressed adults all holding pies, led by the “supreme leader” Larry Bird (Simon Templeman) and his wife, Jackie Joyner-Kersee (Toks Olagundoye).  The Weavers notice that the Joyner-Kersee-Bird family is a bit of an oddity, but accept an invitation to dinner anyway—being neighborly and all…

While at dinner, the strangeness continues… at the dinner table, the Weavers enjoy the food that the Joyner-Kersee-Birds prepared for them, while the JKBs read books—that’s how they nourish their bodies.  After their respective meals, Jackie Joyner-Kersee confesses to Debbie that she wishes Larry Bird would treat her with more respect and talk to her the same way Marty does with Debbie, instead of ordering her around all the time.  Jackie further explains that she allows this treatment solely because Larry Bird gave birth to their children (a teenager, Reggie Jackson, and his younger brother, Dick Butkus)—a feat she will never understand and always appreciate.

Wait a minute… did Jackie Joyner-Kersee just imply that the men get pregnant and carry the babies in Hidden Hills?  Weird… oh, wait; they’re all aliens… okay.

But, perhaps my favorite part was when Jackie Joyner-Kersee was washing dishes… well, not so much washing as throwing them out the window.  Now, that’s my kind of lady!  Haven’t we all been there before?  Wishing we could just toss the nastiness instead of soaking and scrubbing plates?

Anyway, it’s not until after dinner that all the craziness breaks out.

Trying to impress his new friends, Dick Butkus shows Max and Abby exactly what makes him special—with the clap of his hands, he immediately transforms into a little green alien, thrusting green goo all over the Weaver children.  Needless to say, the Weaver children run screaming from the house, leaving the parents wondering what in the world had just transpired upstairs.  And of course, Marty and Debbie don’t believe Max and Abby… not until the entire Joyner-Kersee-Bird family shows up at the Weaver house and lets their true forms shine.

The first episode opened with a lot of promise; I even laughed out loud on a few different occasions.  But, the subsequent episodes haven’t nearly been as funny…  Honestly, I thought “the neighbors are aliens” secret would last a little longer; but they were “outed” before the end of the first episode.  The remaining episodes, while cute, have focused on the Weavers “teaching” the Joyner-Kersee-Birds all about life here on earth, while simultaneously learning about their very own family issues within.

Usually when I review a new television program, I can’t help but award it with the SSTV rating; but I’m breaking away from the norm today.  That’s right—I’m awarding The Neighbors with the NIV rating.  I know what some of our readers are thinking… I must not like ABC’s new comedy if I’m only willing to watch it while I’m dozing off.  That’s not true; I do like it, but it’s not something I’m dying to watch as soon as Wednesday night rolls around.

It’s simply okay; not bad, but not great either… but, definitely appropriate for viewers of all ages—a real family show.  There really aren’t many honest-to-goodness family programs on TV today… and this is one reason why I keep tuning in to The Neighbors.  The sitcom tackles very important topics like the first day of school in a new neighborhood (or world for that matter), how to respond to bullying, the meaning of family holiday celebrations, and the patience to understand that we’re not all the same.

I may not watch The Neighbors until I’m crawling into bed to go to sleep, but I do watch it—it remains a weekly recording on my DVR queue… for now.

What do you think?  Have you watched The Neighbors?   I’d love to hear from you!

Now click over to Amber’s new & improved blog and see what she thinks about Jimmy Fallon’s new creation, Guys With Kids.

Come back next week when Amber and I return with an installment of Why It’s Worth a Watch Wednesday unlike any other… we’re reviewing the same show for the very first time!  Will we agree or disagree after watching Chicago Fire?

GTV (Gourmet TV): Everything we want and more
MacTV (MacNCheese TV): Guilty pleasure. Not perfect, but is satisfies
GMacTV (Gourmet MacNCheese TV): A combination of fine wine and comfort food
JFTV (Junk food TV):It’s not great for us, but we’ll go back for seconds
TBPTV (Twice Baked Potato TV): Part gourmet and delicious, while absolutely horrible for our cholesterol
SSTV (Still Simmering TV): It has potential, but the jury is still out
NIV (Nyquil Induced Viewing): Perfect for that late night television sleep timer
LOTV (Liver&Onions TV): Do we really have to explain? Blech