Television’s winter premiere season is officially here!  With all of the new TV programs airing these next few months, Amber West and I have a ton of homework to do.  We have had so much fun these past few weeks posting dual reviews, we’ve decided to do it again!  Will Amber and I agree or disagree after watching NBC’s new primetime drama, Do No Harm? 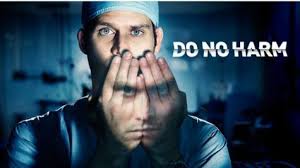 Anyway, this is what Do No Harm reminds me of… only this time we’re watching a doctor with dissociative identity disorder.  I know it’s not the same concept; it’s more like Dr. Jekyll and Mr. Hyde; but when I first saw the commercial for the new NBC series, I immediately thought of My Own Worst Enemy.

By day, Dr. Jason Cole (Steven Pasquale, Rescue Me) is a brilliant neurosurgeon.  At night, Dr. Cole transforms into his other personality, Ian Price.  At first, Dr. Cole was able to control these switches with his own mixture of pharmaceutical drugs.  But when his self-medication fails, he realizes quickly that Ian will do anything to make his “real” life more difficult.  Jason fears Ian; he focuses his life around protecting the world from his  alter ego.  Ian, on the other hand, could not care less about Jason and possesses a more dominant personality—he controls situations according to his own desires, not to find the best solution to a problem.

Both personalities have the ability to recall what the other did while in possession of Jason’s/Ian’s body.  But for the most part, the two communicate via video cell phone messages—exactly like Christian Slater’s show.  And after a certain amount of shenanigans on Ian’s part, Jason decides enough is enough.  Outwardly, Jason agrees to play nice and stop “caging” Ian.  But secretly he plans to “kill” Ian with the help of a researcher (the one who provided Jason with the pharmaceuticals that silenced Ian in the first place).

To be honest, I really like Ian.  He’s kind of hot, well except when he’s partying, taking drugs, and having rough sex.   But other than that, he makes me smile.  Why do girls always like the bad boys?

And let’s talk about Mr. Pasquale’s eyes for a second.  There’s just something about his eyes… When he plays Jason, we can actually see his sweet nature in his eyes; and when he’s Ian, pure Rebel.  How this is possible is beyond me, I guess that’s why it’s called acting, but it is all in his eyes.  “The eyes are the windows to our soul,” right?

I could say more… like the fact that similar to most medical dramas on TV today, the surgical scenes tend to be a bit graphic (I personally wouldn’t watch while eating)… but I won’t.

Why?  Because Do No Harm has already been pulled by NBC.  That’s right; after two episodes, the network has yanked it.

Uh-oh… here we go again.  Remember my rant about Made in Jersey?  It wasn’t the best show, but it also wasn’t given much of a chance before receiving the exact same fate.

This is upsetting… not because Do No Harm was my new favorite show, but because of how, in essence, the network treated this series.

First of all, the 10 PM EST time slot on Thursday night is a tough one.  Viewers already have an abundance of top shows to choose from.  In my house, we already DVR Suits (USA—a HUGE show), Scandal (ABC—another HUGE hit), Elementary (CBS—again, a BIGGIE amongst audiences), and Archer (FX—for an animated series, a popular “cartoon”).  Now, how in the world can NBC expect big numbers from a show that’s competing in this time slot?  And how is it fair to pull after only two episodes?  Did the network truly believe their fresh series would outrank the others on what might just be the most popular night and hour on television?  Why not air more than two episodes, or move it to another night or time slot?  Or why not at least air the episodes already “in the can” instead of hastily removing it from the TV schedule?

Networks, please stop playing with viewers.  Give us a chance to fall in love with new shows.  Dropping a bomb on a freshman series like this does not make us, particularly me, want to give the new shows on your network a chance until they’ve established themselves… and by then, it could be too late.

Oh, and before I go, I might as well mention that this now-gone-from-our-lineup series also starred, as in past tense: Alana de la Garza (CSI: Miami and Law & Order) as Dr. Lena Solis; Phylicia Rashad (The Cosby Show) as Dr. Vanessa Young; and John Carroll Lynch (Body of Proof) as Will.

Oh, and nice play on the name… Do No Harm has double meaning just like the lead character’s dual personalities.  On one hand, it’s the basic definition of a doctor’s Hippocratic Oath.  And on the other, all Jason wants is for Ian to “do no harm.”  But I guess this just doesn’t matter anymore—two seems to be the magic number for this show: double meaning, dual personalities, and two episodes.

What do you think?  Have you watched Do No Harm?  Will you add this series to the “gone too soon” category?  I’d love to hear from you!

Now click over to Amber’s blog and see what she thinks about the Jekyll and Hyde TV program.  Did we agree or disagree?  Trust me; we usually have very different tastes in our television viewing pleasure….

Come back next week when Amber and I review something…  hopefully something that hasn’t already been cancelled!