Fall Television is officially here!  To celebrate, Amber West and I tuned in and watched two brand new pilots this week for our Why It’s Worth a Watch Wednesday reviews—NBC’s Revolution and Fox’s The Mob Doctor. 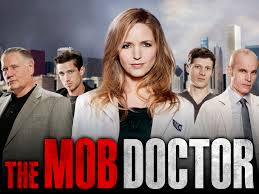 We’re all familiar with The Hippocratic Oath, right?  The Oath every single doctor, nurse, and healthcare professional takes, swearing to practice medicine both honestly and ethically…  But what happens when a top surgeon’s family is indebted to the mob and medical expertise is expected as a form of payment from such a debt?

This is the basic premise of FOX’s new drama, The Mob Doctor.  Based on the novel Il Dottore: The Double Life of a Mafia Doctor by Ron Felber, the series follows Dr. Grace Devlin (Jordana Spiro), one of the top residents in Chicago.  Everything is falling into place for Grace and her future looks promising, until she makes a deal with the devil—or mafia—to save her brother.  As a part of her “arrangement” with the mob, Grace agrees inadvertently to do whatever it takes… even if that means killing a patient in her care.  But will she actually go through with it?  Or will she fight the mafia, trying to do what’s right—staying true to The Hippocratic Oath?  And what sort of consequences will she face if she decides to go against the mob’s orders?

Be honest—who here immediately thought of “taking a Devlin” when they read the good Doctor’s name?  Has anyone seen Just Go with It, starring Adam Sandler and Jennifer Aniston?  That is immediately what I thought of when I heard Grace’s last name.  If you haven’t seen the comedy, a girl named Devlin (played by Nicole Kidman) is Jennifer Aniston’s character’s college nemesis; so instead of Aniston’s  on-screen children saying “I’ve got to go number two” when referencing an upcoming bathroom trip, she changed it up for them.  In her house, “taking a Devlin” really means taking a poo.  It’s a funny movie, but I digress…

Back to Dr. Grace Devlin…

As mentioned earlier, Dr. Devlin is one of the top surgical residents in Chicago.  Her future looks promising and she is catching the attention of the Chief of Surgery at her hospital (Dr. White, played by the great Željko Ivanek from Damages).  She connects well with patients and does what she feels is right for her patients, regardless of the law.  I’d say she’s very Gregory House-like, but House never connected well with his patients… although he definitely never cared if what he did was legal or not.

Of course, Dr. Devlin’s brilliance doesn’t come without a price…  For one, she clashes with an older, more experienced surgeon—her superior.  And for another, her fellow residents (specifically Dr. Olivia Watson, played by Jaime Lee Kirchner from Just Legal) don’t seem to like her much—they think that Dr. Devlin believes she’s better than everyone else and that she isn’t a team player.  But none of this stops Dr. Devlin; she does her job the way she knows how and she’s darn good at it.  She’s so good, even a fellow doctor is willing to look past a judgment call that she makes when dealing with a young girl’s pregnancy—a decision that he knows is not at all the ethical thing to do.  Okay… so this very same doctor is her current boyfriend (Zach Gilford from Friday Night Lights), but still.

Now, let’s talk about the deal she made with the devil…

We’re going to refer to Dr. Devlin as Grace now, and get to know her from a personal standpoint.  At a very early age, Grace actually saw her first dead body—her father’s dead body.  She didn’t seem too upset to see her father in this way; apparently, he was a drunk and the family was better off without him.  However, Grace does have a close relationship with her mother—a woman who has survived cancer and is now ten years in remission.  I think it would be safe to assume after knowing these two facts about her parents, that Grace felt responsible for keeping her younger brother safe and out of as much trouble as possible—the family had no father figure anymore and her mother was sick.  However, it seems that despite what Grace does for her little brother (Nate, played by Jesse Soffer from the Brady Bunch movies), he continuously makes the wrong decisions.  And one of these bad decisions has cost Grace her freedom.

To save her brother’s life, Grace agrees to do whatever it takes in order for a Chicago Mob “captain” to forgive her brother’s debts.  For the most part, Grace keeps up her end of the bargain—until this same “captain” wants her to kill a federal witness while in surgery.  I don’t want to go into detail in case someone missed the pilot episode; but I will say if Grace is afraid of the mob, she doesn’t show it.

The new series also stars William Forsythe as Constantine Alexander, the former mob boss who claims to be “reformed” after a stint in prison, but we all should know better than to believe that… and James Carpinello (Broadway alum and husband to one of our favorite Whedonites, Amy Acker) as Franco, the loyal mobster who might just have a crush on Grace.  I was also excited to see Michael Rapaport (one of my favorites the 1995 movie, Higher Learning) in the commercials, but his name didn’t appear in the credits online and now I know why—it was just a guest stint.  BOO!  He was one of the main reasons I watched in the first place.

Considering Grace’s current situation with the mob, as well as her history with the mob (this is made clear at the end of the pilot episode), one might think she would hate the head of the family—Constantine.  But she doesn’t; it almost seems like the two share a father/daughter type of relationship.  The big-bad Constantine even offers her a way out of the deal, which requires her leaving Chicago… but she chooses to stay.  Even then, Constantine promises to do his best to protect her.

The dialogue at the very end of the pilot was great.  I love dialogue, especially dialogue that you know has meaning to the story’s future:

“Remember, you had a choice.” Constantine to Grace

To be honest, it’s too early to award The Mob Doctor with anything other than the SSTV rating.  I had to fight the urge on this one… I wanted to award the new series with a higher ranking—I think it has that much promise.  But, it’s early and we’ll just have to sit back and see if the episodes continue to engage the viewer and whether or not Dr. Devlin is a likable—correction—lovable character.  But so far, so good…

If you missed Monday night’s premiere, don’t worry; catch an encore presentation of the pilot this Friday night, September 21st on Fox.

What do you think? Did you watch The Mob Doctor?  How would you rate it?  Is this the kind of show you were hoping to see this fall?  I’d love to hear from you!

Now click over to Amber’s blog and see what she thinks about NBC’s latest sci-fi drama—Revolution.  I hear Billy Burke has some MAD sword-fighting abilities…