We may have started a new trend here last week… I hope so at least.  Anyway, today we have our second Why It’s Worth a Watch Wednesday guest blogger!

The Ooo Factor readers may remember today’s guest, Steven Montano, from one of our earlier author features.  Steven is really a machine, truth be told.  He has written six stories in his post-apocalyptic series, Blood Skies, as well as the novella, Something Black.  Not only that, but he’s a full-time accountant!  See?  A machine…  He’s married with two beautiful children, loves spending time outdoors (he lives in Washington State so he can afford to spend time outside, unlike those of us in Texas where it’s already in the triple digits), and he takes magnificent photographs.

I’ve had a lot on my plate lately (like running away to Vegas and getting married!!), and instead of reblogging an older post today, I asked Steven to step in.  I’ve heard a lot of good things about today’s TV show, and when Steven messaged me asking when I was going to review it, I shamefully admitted I hadn’t seen it and left an open invitation for him to write a review for us.  His guest post couldn’t have come at a better time.  So, what does he think about A&E’s original series, Longmire?

Whoa. A guest post.  And one completely out of my element, because this week I’m reviewing the A&E TV Series Longmire.

First off, about me: I’m the author of the dystopian military sci-fi Blood Skies novels and the upcoming epic fantasy City of Scars.  And while my being an Indie author in no way qualifies me to write a review of a television series, it’s worth noting that my wife Liberty and I have become quite the TV connoisseurs in the past few years, eating up everything from police procedurals to murder mysteries to wacky comedies to gritty fantasy.  It’s difficult to say which television genre is our favorite, but the “cozy murder mystery” ranks right up there…and that brings us to Longmire, based on the popular novels by Craig Johnson.

Longmire follows the title character, Sheriff Walt Longmire (Robert Taylor), as he returns to work following the death of his wife to protect the people of remote Absaroka County, Wyoming.  Aided by a diverse and eclectic group of deputies and his barkeep best friend, Walt investigates oft-times brutal crimes while contending with racial tensions between the white residents and the local Cheyenne reservation, as well as the pressures of potentially not being re-elected as Sheriff. 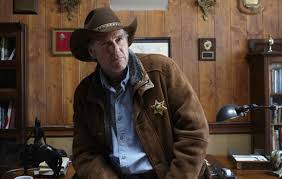 Though Longmire is listed as a “crime drama,” for me it falls under what I like to call “cozy murder mystery”: a whodunit featuring lots of familiar elements, engaging characters, and just enough humor and surprises to keep you wanting to come back for more.  While the name “cozy murder mystery” may call to mind shows like Murder, She Wrote or Matlock, there are plenty of modern equivalents that fill the same criteria, from Castle and Elementary to Bones and Rizzoli & Isles.  With all of these shows, figuring out the crime really takes something of a backseat to watching the characters work off of one another and struggle against their situations and environment, and even if you can guess who the killer is in the first 15 minutes (which is usually the case with all of the afore-mentioned shows), watching our intrepid heroes figure it all out is often the most engaging element.

Longmire takes the familiar elements of these shows – the mysterious killing, the red herrings, the ever-growing list of suspects and last-minute revelations – and adds a new twist: rather than being located in a big city this show takes place in a modern Western setting, and even though modern technology is available it often plays little part in solving the case.

As I mentioned before, characters are usually the most important aspect of a show like this, and Longmire is chock full of good ones, not the least of which is Walt himself.  Old-fashioned and gentlemanly, the stoic and reserved Sheriff Longmire also has something of a darker side, evinced by a series of flashbacks to violent events from his past.  Walt is an imposing presence, not because he’s bombastic and loud but because he’s so quiet and unassuming in spite of his size.  He loves his daughter (even if he keeps her in the dark), Rainier beer and his good friend Henry (a wonderfully understated Lou Diamond Phillips).  Anger seethes under Walt’s skin almost constantly, but in true “old fashioned Cowboy” fashion he doesn’t “deal” with things so much as just carrying on, trudging along and doing his job regardless of what else is happening. 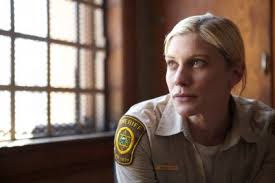 And Walt has plenty of distractions: Branch’s constant attempts to undermine his reputation, Vic (Katee Sackhoff is deliciously sarcastic as a big city cop completely out of her element in the country) gives him grief over being the last man alive not to own a cell phone, and an out-of-town homicide detective (Charles S. Dutton, terrific as ever) is trying to corner Walt and get him to answer some questions about mysterious events Walt may have been involved with in Denver.  But at the end of the day you know Walt will get the job done, even if a little bit more of his already battered and worn-out soul is damaged in the process.

All in all, I find Longmire a thoroughly enjoyable experience.  Groundbreaking?  Not exactly, but I like the way it plays with conventions of the crime drama without being too obvious about it.  The show can at times be quite dark (some of the crimes are gut-wrenching, and not always about murder), and the politics and tension between the Anglo-dominated county and the Cheyenne tribe are well-handled without over-sympathizing or demonizing either side.  All of the characters are nicely rounded (even “The Ferg”, who in spite of being something of a walking cliché still manages to feel believable), and right from the very first episode I felt like I was reconnecting with a bunch of old friends.

So, using Tiffany’s system, I’ll give Longmire a GMacTV rating. Longmire isn’t exactly revolutionary television, but it’s a well-crafted drama which rarely missteps.  It’s also one of the few shows I eagerly anticipate every week (curse you, mere 10-episode season!).

Oh, and who is Robert Taylor?  This Australian born actor has only one major U.S. Credit to his name, and when I learned what that was I had to do a double-take.  Gruff, slow-talking Walt Longmire is none other than Agent Jones from The Matrix.  Whoa.

Thank you SO MUCH for taking over this week, Steven.  You are welcome back anytime.

I should probably catch up on Longmire… I do enjoy A&E’s The Glades.

What do you think?  Have you seen Longmire?  If not, do you plan to?  We’d (Steve and I) love to hear from you!

If you haven’t already, be sure to get to know Steven better by reading his blog, liking his Facebook Author Page, and following him on Twitter and Goodreads.

And remember to stop by the #watchwed hashtag in Twitter to discuss today’s review, or to mention any television programs that you’d like to see on Why It’s Worth a Watch Wednesday in the future.