The selection process was difficult, considering how many times the Psych writers and actors have knocked the ball way out of the park.  And because we had such a hard time choosing only these ten, we’ve decided to share a few more Psych episodes worthy of a watch!

Sit back, relax, grab a cup of coffee, and perhaps a slice of pineapple or another favorite blog reading snack.  Enjoy!

What do we get when we cross the classic horror films Friday the 13th and April Fool’s Day?  “Tuesday the 17th” of course!  Co-written by the man who plays Shawn Spencer himself, James Roday masterfully crafted this spooky episode, combining elements from both movies… from the client, appropriately named Jason Cunningham (played by Mackenzie Astin, from The Facts of Life)—Jason, from Jason Voorhees, and Cunningham, from the Friday the 13th director, Sean Cunningham—to the staged and fake murders that “fooled” Shawn, leading to a big celebration by all involved in the joke… until a “real” body is found floating in the lake.  Brilliant episode! 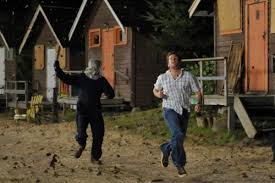 When the team investigates an apparent hanging at a local apartment building, Lassie jumps at the chance to purchase the newly available condo.  But in a tribute to the 1980 classic horror film, The Shining, spooky things keep him up late at night… including two older twin sisters and a small boy riding his big wheels through the hallways.  With Shawn and Gus armed and dressed like the Ghostbusters, they spend the night in the apartment, hoping to rid Lassie’s new place from all things evil.  Be sure to pay special attention to Dule Hill and his spot-on impressions of The Shining’s Shelley Duvall… 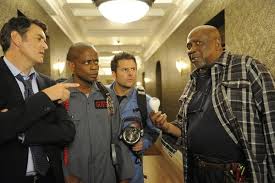 For the most part, our favorite Psych consultants work cases for the Santa Barbara Police Department… but every once in a while, a stranger walks in off the street needing their help.  And since Shawn and Gus always need the money, they rarely, if ever, turn someone away—regardless of how crazy the request.  So when a man (Josh Malina, Dule Hill’s West Wing co-star) hires them to watch him transform into a werewolf, Shawn and Gus oblige.  Of course they don’t really take him seriously and they fall asleep on the job, literally, only to discover their client missing when they wake up.  But it’s not just that—a window is shattered and they discover animal hair.

Psych once again pays tribute to another ‘80s classic (An American Werewolf in London) in this episode with guest star David Naughton (the “American Werewolf” from the 1981 film), as well as the memorable balloon scene from the movie.

To celebrate Gus’s birthday, Shawn takes him to a fashion show featuring his favorite model.  While at the show, one of the clothing line’s owners is electrocuted to death.  Lassie and Jules think it’s an accident, but Shawn believes it was murder.  To prove his case, Shawn and Gus go undercover as models—Black and Tan.

I realize my summary for this episode is short, but trust me, it is funny.  And if you’re not already a Psycho-O like me, remember to stick around after each episode for the “Psych Out” moments, or additional footage and/or bloopers.  Sometimes the cast sings some of our favorite hits from the past, and “Black and Tan” is no different… enjoy the boys’ rendition of “Come On Eileen.”

While investigating a case sans Gus, Shawn finds himself in the wrong place at the wrong time… and is kidnapped.  Not only that, but the bad guys shoot him.  As his life hangs in the balance, he uses the skills his father has taught him over the years and he leaves as many clues as possible so his friends can find him.  Everyone works together—Henry and Lassie partner up, as do Jules and Gus.  Pretending to believe his life is coming to an end, Shawn convinces the kidnappers to let him call his girlfriend; but instead of calling his girlfriend (Abigail, played by Rachael Leigh Cook from She’s All That), he calls Jules.

Granted, this episode takes place before Shawn and Jules profess their love for one another… up until this point, their relationship was a bit of a back-and-forth game with one on board while the other was not.  But this episode gave viewers what they wanted at the time—Shawn’s and Jules’ true feelings were revealed.  Very intense episode… 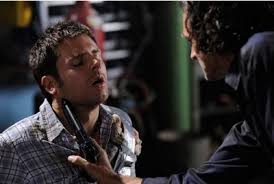 If not apparent from my back-to-back weeks blogging about Psych, I love this show and consider myself a Psycho-O, a die-hard Psych fan.  Not only do the writers and creators outdo themselves with each and every episode, ensuring craftily designed mysteries and packing the show full of pop culture puns and tributes, they never forget to make the audience laugh.  Heck, even the commercials kill me every time I see them, even when I’ve seen the same commercial over and over again.  Unlike the Hollywood movie trailers that include all of the funniest moments in the sneak peeks, one can always expect to laugh from start to finish when Shawn, Gus, Lassie, Jules, and Henry take to the screen.

Perhaps one of my favorite elements of Psych and its comedy and pop culture references comes when Shawn introduces himself and Gus during an investigation.  Shawn almost always introduces himself accurately (although not always), but Gus isn’t so lucky.  Take the “Let’s Get Hairy” episode.  When introducing themselves to a psychiatrist, Shawn introduces himself as “Randle P. McMurphy” and Gus as “Cheswick,” two patients from One Flew Over the Cuckoo’s Nest.  Shawn provides aliases for both of them in this example, but it’s usually just Gus with names like “Art Vandelay” from Seinfeld, “Black Magic,” and “Fellatio Del Toro.”  It’s always something in every single episode…

There are also the numerous times Shawn tells Gus to “not be” something:  “Gus, don’t be Nick Cage’s accent from Con Air” (episode “Death is in the Air” – Season 4) or “Gus, don’t be Pete Rose’s haircut” (episode “Dead Man’s Curveball” – Season 6).  These lines of dialog aren’t always pop culture related, sometimes they are just funny when used in context of the episode, but we can always count on some “Gus, don’t be” comment… and a laugh.

Do you watch Psych?  What’s your favorite episode?  Do you have a favorite Gus alias or “don’t be” moment?  I’d love to hear from you!