I’ve asked it before, and I’ll ask it again…  what says Friday night during the fall months better than high school football?

The sun sets; the temperatures cool; and the sounds of marching bands, spectator’s cheers, and the crackling of shoulder pads crashing into one another echo throughout the neighborhoods.  Ah, the memories…

In honor of Football Sweetheart‘s recent release and football season everywhere, grab the old letter jacket, microwave some popcorn, grill a few hot dogs, crack open a coke, and curl up on the sofa for a great movie that reminds us all of the good ol’ Friday nights in fall.

High school football is life in West Canaan, Texas, and anybody who’s anybody plays their part for the team.  Training begins at a very early age—girls perfect their toe-touches as soon as they can jump, and boys practice tossing the pigskin through a tire hanging from a tree as soon as they can stand. 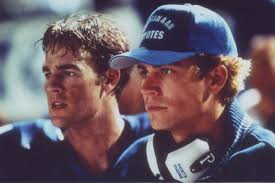 The two teens seemingly have it all—Mox has the grades for prestigious Brown University, plus he has a healthy teenage relationship with his best friend’s sister (Jules Harbor, played by Amy Smart).  Lance doesn’t quite have the grades, but he does have an opportunity to play college ball, and he’s dating a gorgeous cheerleader (Darcy Sears, played by Ali Larter).

Everything comes crashing down around the boys when Lance injures his knee during a game and Mox is thrown onto the field and thrust into the spotlight.  Mox wasn’t as prepared as he should have been, having not expected to play, but he manages his way through the final buzzer and later rushes to the hospital to be by his friend’s side. 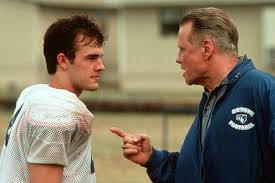 Doctors determine that Lance can’t play, and his football days have quite possibly come to an end.  Mox can’t believe what he’s hearing and he grows even more devastated when he learns that the team’s legendary coach (Bud Kilmer played by Hollywood great, Jon Voight) has been covering up minor knee tweaks here and there by injecting Lance with cortisone shots for a while now.

Mox makes the best of the situation and takes charge of the team with Lance and his other friends by his side: Charlie Tweeder, played by Scott Caan; Billy Bob, played by Ron Lester; and Wendell Brown, played by Eliel Swinton. 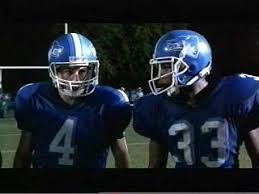 Varsity Blues isn’t just about football, but more about teens finding their way in spite of what they have been conditioned to do.

Varsity Blues is about as realistic as it gets when talking about high school football in West Texas, without actually claiming to be inspired by actual events: the coach’s win-at-all-costs attitude; the quarterback’s celebrity (everyone remembers the whipped cream bikini, right?); the realization that great moments are often times the most painful; and that character is built by going against the norm.

The ending can make even the toughest man cry, and this movie will forever be one of the best Friday night flicks for fall. 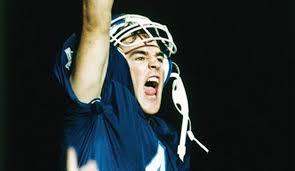 Now, I’m ready for some football!

If you liked Varsity Blues, check out my YA Mystery novel, Football Sweetheart… now available on Kindle and Nook!