Who loves vacations?  White sand, turquoise water, and a soft island breeze with a few pina coladas – that’s our idea of a vacation.

Last week’s Friday FabOoolousness blog post listed seven places on my travel bucket list, and not one of them included locations within the United States.  What’s ironic about the timing and publishing of the post?  I was sitting pretty in a beach chair off the Atlantic Ocean in a tropical paradise – Islamorada, Florida.

Islamorada means “purple island” and is known as a “village of islands” located on multiple islands within the Florida Keys, almost centralized between the cities of Miami and Key West.

The tropical climate in Islamorada resembles that of the Caribbean.  While we were there, the temperature never raised above the triple digit figures we’re accustomed to in the state of Texas this time of year, and the humidity wasn’t like walking through a constant cloud of moisture.  It was simply beautiful allowing our group to stay outside for hours on end enjoying the sand and beach.

Our group couldn’t resist the urge to take the snorkeling charter out to the Alligator Reef Lighthouse, a coral reef only thirty minutes from the shores of Islamorada.  The waters were only about ten to fifteen feet deep at the lighthouse, and crystal clear making for a great snorkeling experience.  We saw Surgeonfish, Juvenile Angelfish, a few bright blue wrasse, and a couple of large and beautiful Parrot fish.

Not a seasoned snorkeler, I headed back to the boat after spotting a few barracuda and being instructed to make a fist (they supposedly like to nibble on fingers), missing out on the jellyfish, the Moray eel, and the four-foot baby shark that the rest of the group experienced.  I can’t really say that I’m sad.

Another must-do when vacationing at the beach is to order and consume as much fresh fish as possible.  Before every dinner, we relished the conch and clam chowder as well the jerk shrimp and conch fritter appetizers.  Our main dishes included blackened Mahi Mahi, grilled and whole Yellowtail Snapper, Lobster Schnitzel (shelled, rolled in breadcrumbs and pan-fried with a light butter sauce – yea, it’s pretty tasty), scallops, crab, and mussels to just name a few.

Who can travel to the Florida Keys without eating key lime desserts?  We sampled the key lime cheesecakes, the tarts, and the pies.  Nothing beats topping off a fine dining experience like a piece of key lime pie and a cup of coffee.  Well, maybe a few people prefer Sambuca (tastes like liquid licorice) and bread pudding for dessert.

For those looking for a U.S. tropical paradise, I recommend the Cheeca Lodge and Spa.  The resort has a secluded beach, a 525-foot pier, a Jack Nicklaus 9-hole par 3 golf course, a camp for the kids, and of course a spa.  The resort also offers kayaking, windsurfing, chartered fishing boats, and sailboat rentals.  Once you arrive, you never have to leave again.

Enjoy some of our shots around the resort!

My view while sipping a cup of morning coffee

What’s your ideal vacation and where do you like to go?  Do you know of another tropical paradise in the U.S. that we need to check out?  Please leave a comment – I’d love to hear from you!

A great method to enjoy reading is to find an author or a series of stories that you simply can’t put down.

My collection of the series on a messy bookshelf

The series follows four female friends (a detective, Lindsey Boxer; an attorney, Jill Bernhardt, and later Yuki Castellano; a medical examiner, Claire Washburn; and a reporter, Cindy Thomas) as they work together to solve murder cases in San Francisco.  Without giving too much away, I’ve included a short synopsis of each story.

1st to Die– Lindsey and her team of friends investigate the serial murders of multiple couples.  Readers are introduced to a few of the hardships in Lindsey’s life following her working on a tough case, “The Honeymoon Murders”, and her diagnoses of a life-threatening disease.

1st to Die received such great reviews that a two-hour television movie starring Tracy Pollan as the blonde bombshell homicide detective aired in 2003.

2nd Chance, co-written by Andrew Gross – The Women’s Club investigates a local gang-related murder spree.  Lindsey’s troubles continue, plus her father is introduced (they too share a troubled past).  The other three women have their hands full while assisting Lindsey with the case: one of the four is targeted by the killers, another gets involved in a relationship with one of the victims, and another announces life changing news.

3rd Degree, co-written by Andrew Gross – Arson, fire, and bombs – OH MY!  The third installment of the series is action packed.  The “August Spies” threaten to kill every three days, and promise the politicians in San Francisco aren’t safe.  FBI investigator, Joe Molinari, joins as a recurring character while one of Lindsey’s friend’s life is in danger.  3rd Degree is nail-biting!

4th of July, co-written by Maxine Paetro – Lindsey goes on vacation to stay at her sister’s house in a desperate attempt to escape the drama and sadness in her life.  The detective in Lindsey can’t vacation, so she starts investigating the murders that she reads about in the small town’s newspaper, and discovers that these murders seem familiar to her.  Lindsey then does what she does best – she throws herself right in the middle of the cases.  Local authorities warn her to mind her own business, but does she?

The 5th Horseman – co-written by Maxine Paetro – Lindsey and team investigate a San Francisco hospital when one of their own family members takes a turn for the worst after what should have been a routine hospital stay.  A pattern of inexplicable deaths emerge, and the investigation then threatens one of their own.  A new member of the team is introduced in the fifth installment: Yuki.

The 6th Target, co-written by Maxine Paetro – Lindsey focuses on two cases – A shootout on a ferry ride where one of her best friends narrowly escapes with her life, and the kidnapping of affluent families’ children – no ransom, no contact – the children simply vanish.

7th Heaven, co written by Maxine Paetro – The governor’s son is missing, and another arsonist is on the loose destroying rich couples and their beautiful homes.  Romantic tensions flare as Lindsey fights the intensifying emotions for her partner Rich, and her FBI agent, Joe.

8th Confession, co-written by Maxine Paetro – Cindy discovers a homeless man’s corpse, and her empathy pushes her deep into the case.  Despite Lindsey’s warnings, the reporter in Cindy yearns for her big story, prompting Lindsey’s partner to keep a watchful eye, and a few other things, on Cindy.  Will jealousy break up the group?  Meanwhile, Lindsey investigates the mysterious deaths of a wealthy couple, and discovers her case might be related to another homicide that occurred decades earlier.

The 9th Judgment, co-written by Maxine Paetro – Mothers and their small children are being brutally murdered in public parking garages, and the killer proudly signs his work with lipstick on the car windows.   At the same time, a cat burglar happens into the wrong home, and is now wanted for murder.  After successfully closing the cases, Lindsey’s life is turned upside down; the ending brought me to tears. 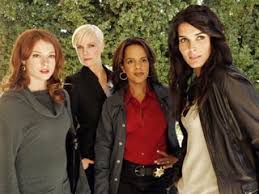 ABC aired a dramatic series for one season (2007-2008) and cast Angie Harmon as Lindsey Boxer.  While I enjoyed the show, the episodes didn’t stick to the novel’s storyline, and the show was short-lived.  The visualization of the TV cast helps create a picture show in my mind as I read Patterson’s novels.  I can’t help but envision Angie Harmon as Lindsey (except Lindsey is blonde in the books), Laura Harris as Jill, Paula Newsome as Clair, and Aubrey Dollar as Cindy.

Here’s to hoping that a network adapts a screenplay for the remainder of the series!  Why stop after 1st to Die?  Who doesn’t love a good two-hour mystery?

Do you like The Women’s Murder Club series?  Who’s your favorite character?  What other series has you riveted and eagerly awaiting new installments?  I’d love to hear from you!